I have been having an issue with DVD Architech. I have version six, but downloaded the version 7 trial, but the issue is happening in both.

I will then go to DVD Architect, start a menu based Project with the Blu Ray 60i option. When I go to put the video I just rendered into the project, either by dragging and dropping it from the folder, or using the DVD Architech explorer, the program freezes/hangs. SOMETIMES, after waiting several seconds, it will import the video. Most of the time, it will not and I have to use task manager to close DVDA.

Shorter video files, it seems to un-freeze and import them eventually. But the current file I am trying is almost an hour long, and it simply will not take the file.

Am I doing something wrong? I don't recall ever having this issue the last time I had to do a blu ray disc....

Thanks in advance for any help!

I will then go to DVD Architect, start a menu based Project with the Blu Ray 60i option

I'm very curious about that option. Where did you find it in DVDA 7?

The highes settings I can make are these 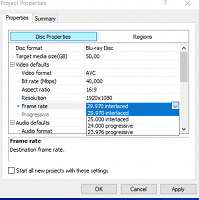 one of the main reasons I don't use that program not anymore for at least 8 years. 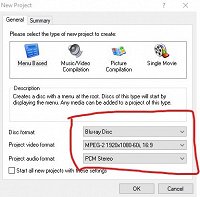 This was the section I was talking about.

And I actually figured out a work around. I have to find the file in the DVDA explorer menu, right click on it, and play it as a preview. For some reason that forces the files to load right in. Burned 3 projects with it already. Thanks, though!