I would like advice on a CPU and Video card for Vegas Pro 18. For the two items I have a budget of about $600 or $700. Not sure how to split that between a CPU & video card or if I should put it all into a CPU with integrated graphics. My projects are very basic with 50 - 100 clips with simple transitions and a few audio tracks. Currently my i7-3770 without a dedicated graphics card takes 8-10 hours to render a 45 minute video in 2K. (Using Movie Studio 16) Would like to get that down as much as possible and maybe graduate to 4K. Thanks! Mark

@mhammann57 Hi, i'm sure someone will give you more advise but there's a benchmark test you could try & there's other's results showing their CPU & GPU with render times, you'd have to Google & see what you can afford,

This is the Benchmark test

If that's your total budget you might have better luck with a refurb or slightly older computer model? It would be best to have integrated graphics and a dedicated GPU (if it's a desktop you can add the GPU later as budget allows).

Both https://en.wikipedia.org/wiki/LGA_1155 and https://www.cpu-list.com/lga1155-cpu-list/ show that your current 3rd gen i7-3770 is the end of the line for that socket type. This means that it most unlikely that a later generation Intel CPU will be compatible with your computer (unless someone knows of a workaround).

Re a GPU, there have been many comments on the forum over recent months frustrated by the extraordinarily high price of GPUs these days. If you do a GPU search on a website like Amazon, you'll get an idea of those prices and see that many of the 'budget' GPUs will eat up all or most of your budget. Some popular GPUs, especially the 3070 range, are in the $1,000 to $3,000 USD range.

Just had a look at the price of PC's, the 'Home' Pc's all have Intel UHD,

I would like advice on a CPU and Video card for Vegas Pro 18. For the two items I have a budget of about $600 or $700. Not sure how to split that between a CPU & video card or if I should put it all into a CPU with integrated graphics..

This would run off of the internal iGPU until GPU prices drop some more... However, in my case I had a $200 VEGA 56 purchased on eBay before the mining craze making my total upgrade around $850 USD. (I also borrowed the DDR4 from another system until I could find 32 GB of DDR4 for $100...)

The ASRock W480 does NOT overclock, as it is intended as a stable workstation platform, but it DOES have built-in 10G networking and (2) Thunderbolt 3 ports so I did not have to buy any add-on cards. Although my other 9900K system has (4) 2TB M.2 drives onboard, this 11700K system is truly a budget build so I am using a used $75 LGI PCIe RAID controller with (8) old SATA drives to provide fast/roomy storage until the price of larger M.2 storage drops.

This upgrade doubled my 4K render speeds for most intermediate codecs I use but you still need a decent PCIe GPU to maximize GPU-assisted codecs like the Magic AVC, HEVC, etc. codecs...

Before the introduction of Intel HD Graphics, Intel integrated graphics were built into the motherboard's northbridge, as part of the Intel's Hub Architecture. They were known as Intel Extreme Graphics and Intel GMA. As part of the Platform Controller Hub (PCH) design, the northbridge was eliminated and graphics processing was moved to the same die as the central processing unit (CPU).

Maybe I'm reading this wrong but it also appears to be on-die for Ryzen mobile with Radeon Graphics.

Many thanks @RogerS for clarifying the iGPU/CPU issue. In view of that, I've removed the iGPU/CPU comment from my earlier post.

Thank you to everyone who replied. Your time and effort to provide advice is greatly appreciated and exactly what I was hoping for. I suppose that I will go with a CPU with integrated graphics and wait until I can afford a decent GPU. As long as it decreases my render times so that I'm not waiting all night for it to finish. I think the i7-11700K with intel UHD graphics should make that possible. Thank you also for the advice on motherboard, memory, etc. This forum and those who contribute is a great help to those like me who don't do this for a living. Thank you again very much!!! PS: Gid - Waiting until budget allows the upgrade to 19. TheRhino - great information on components! RogerS - Going to check out Ryzen on die graphics. Dexcon - Agree - decent GPU out of my budget so, best to wait.

If you aren't going to have a dedicated GPU I'd suggest Intel for its QSV decoding and encoding as it seems to be the most compatible in Vegas. QSV renders are also quite fast.

The Ryzen Radeon graphics seems to be [edit: mostly] for their laptops.

Thank you RogerS. Definitely want to try the QSV rendering on my next project. Appreciate the advice! Mark

I suppose that I will go with a CPU with integrated graphics and wait until I can afford a decent GPU. As long as it decreases my render times so that I'm not waiting all night for it to finish. I think the i7-11700K with intel UHD graphics should make that possible.

Consider 12700 CPU, only slightly more expensive and you don't need the expensive Z690 motherboard to run it. Reviews I've seen have it running video editing/manipulation type software 10-15% faster than 11-900K. .

Great advice todd-b! The difference in rendering between my i7-3770 and the i7-12700 ought to keep me satisfied until I can save up for a dedicated GPU. Thank you!!! Mark 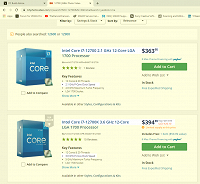 @john_dennis in benchmarks the only difference seen is the difference between the peak CPU speeds, which is 100mhz, this is because with a decent motherboard the PL2 power mode required for peak boost is unlocked, so if 12700 needs 180watts and it doesn't overheat it will stay at 180watts indefinitely (perfect for rendering) . Unfortunately there are motherboards that enforce Intel's limited time PL2 boost, then fall to PL1(65watts) which Intel would have preferred all motherboard makers did to differentiate the performance difference between 12700 and 12700K

I can recommend 2 B660 motherboards which constantly stay in unlocked power mode, with quality VRM's that can tolerate a constant 180watts if required

Bazooka for built in wifi, there is a wifi version of MSI PRO B660M-A DDR4, but it's more expensive than Bazooka

Your time and effort in providing advice is greatly appreciated and exactly what I needed. I'm thinking of getting a CPU with integrated graphics and saving up for a decent GPU later. That should be possible with the i7-11700K and Intel UHD graphics. Thank you also for the motherboard, memory, and other suggestions. This forum and those who contribute are a huge help to people like me who don't make a living doing this. Thank you so much again!!! PS: Gid - I'm holding off on upgrading to 19 until the budget allows it. TheRhino - excellent component information! RogerS - I'm going to see what Ryzen has to offer in terms of graphics. Dexcon - Agreed - a decent GPU is out of my price range, so I'll have to wait.

GPU prices are dramatically dropping in prices right now. 3080 10gb's for example dropped in price 35% in the last month, but check local markets. Probably within another 30 days this GPU would have reached a stable price. You don't need a 3080 for Vegas though, 3060 seems appropriate, buy a more powerful GPU if you have other software that needs it

thanks for the suggestion best gpu for ryzen 5 2600

I have been researching building a gaming PC for a $1500 budget. My budget includes a monitor and a keyboard. I'd appreciate any input and recommendations on how I can improve this rig. I am looking for something that I can upgrade in the future without swapping out too many things. I am still debating on the HD because I do not want it to bottleneck my system. I plan on overclocking the RAM hence the 2133 Mhz ram.

It is my first build and journey into PC building and overclocking. Suggestions are welcome. Thanks

have been researching building a gaming PC for a $1500 budget.

And this relates to Vegas Pro ... how? After all, this is a forum concentrating on issues relating to Vegas Pro. If you look at the OP's question, it relates to the best CPU and GPU for Vegas Pro 18.

If your aim is a gaming computer, you will be better off finding a forum devoted to gaming.