As it stands now I can render the 360 video footage as a regular, non-360 video and inject the 360 metadata afterwards to get it up on YouTube. And I know from other posts people were suggesting to use the Happy Otter scripts and Voukoder but I should be able to do it all within Vegas, as it's one of the listed features. (Incidently, Voukoder appears as a rendering option with a regular video but not with a 360 degree video.)

Am I missing something? Is there a properties or render dialogue box I have to select?

From this link "5.7k render template now available for 360 projects":

Is available.
Not my stuff, but look

How do you get to the 5K template? I don't see it in the render options shown above. Do I need to load/update something? Do I need to modify an existing template?

How do you get to the 5K template?

By using a 5K project that you can also make yourself.

That 5k output then will be broken (black frames only) if used for 360°.

That 5k output then will be broken (black frames only) if used for 360°.

After this comment of you I looked at the made file and see indeed only Black frames.
Because I have no real 360 files I only looked at the MediaInfo of the rendered file where I still see this 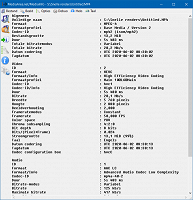 After rendering with this template

that has ended normal with this picture 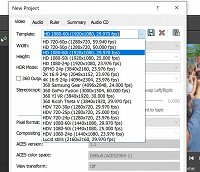 If there is a new 5K template available, why is it so hard for someone to explain how to find it? I have no problem creating new templates for my own use, if that's what is needed. But if this is a new "feature" it ought to be documented somewhere, eh?

Such a projectformat you have to make yourself. Look I created a 5.7k 360 degree video project template by customizing the existing 360 degree Samsung template (4096 x 2304), changing the dimensions to 5760 x 2880. When I customized I also checked off "360 Output" but Vegas doesn't save this setting for some reason. So when I start a project, I drag the stitched 360 degree video into the timeline, go to properties, select my customized 5.7k 360 templete, check the "360 Output" box, and now it appears as a 360 video in the timeline that I can edit. Unfortunately, as mentioned above, there's no 360 degree 5.7k rendering template.