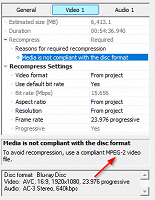 Am using version 7 build 100. For anyone who can get this to the DVDA devs, it would be helpful to include the version number on the about dialog.

What software and settings did you use to encode the AVC file?

I used NVIDIA's encoder but it doesn't matter what software one uses. Based on my initial post, whether an AVC file is compliant or not, DVDA seems to only produce MPEG-2 based Blu-ray. So the question to answer is, what's the point of having an AVC Blu-ray project? Unless this is a bug in DVDA of course.

Many people have created Blurays with AVC on this forum. I have always used MPEG-2. You said it didn't matter what software you used, have you tried other software? Do you know for sure that the AVC that NVIDIA creates is a Bluray Compliant file?

@AYColumbia This may sound like a daft question, but I have to ask.
Have you set your project properties to a Blu-Ray project? 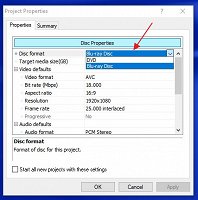 I've no problem with avc using either Sony or Magix/MC codecs. But my files are 50i.

Hey all, thanks for your help. Your questions and my prior reply made me think of a few things to try. I grabbed some old encodes that are Blu-ray compliant and sure enough these worked fine. So not sure why my current encodes aren't recognized as compliant as they have all the BD publishing requirements. Even my AC3 file isn't recognized as compliant which makes no sense right now. Those files were encoded with x264 software encoding. I moved away from that a long time ago because I was able to achieve what I needed via HW encoding at a much faster speed.

@Jack S, Yes to answer your question. My project is an AVC Blu-ray project.

@Former user, I can't be 100% sure other than following the requirements for Blu-ray encoding to make it compliant. I know the encoder even has a --bluray switch. If you're curious, this is my go-to ref for BD specs. It's now 11 years old but I don't recall the spec changing, but who know. 😉

I'll post a solution once I find it. Thanks for the feedback.

I've never had issues with the Magix, Mainconcept and Sony blu ray AVC templates in Vegas with DVDA7. Never asked to re-encode.

Also, there might be more to this story as blu ray doesn't use pure AVC h.264, it's less compressed and the final files are always in a Mpeg2-Transport stream (M2TS) file in the rendered project, so blu ray doesn't use the same exact codec as what you'd render for a modern MP4. That is why you see VBR bit rates up to ~40Mb/s for "AVC" video in commercially pressed 1080p blu ray discs. There's absolutely no reason to have such a high bitrate like that for true AVC h.264 when you start diminishing returns at ~16Mb/s for 8 bit 1920x1080 at 23.976p. DVDA7 gives you a warning at 28Mb/s as you can't burn safely above that, which is a hint at this. Pressing the discs gets around this limit for burning.

Make MKV rips all my blu rays as "AVC", as shown in media info, but the bit rates are insanely huge for what it should be if it was truely h.264. I wonder if the industry standard is still MPEG2 for blu rays, and what exactly the difference is between blu ray "AVC" and modern h.264 mp4 files.

I finally got things figured out. The AC3 file issue was because I was adding the media from an m2ts container and for some reason DVDA did NOT recognize the audio as AC3 based on the project properties. I went with using the elementary streams.

The encoding issue turned out to be a combination of making sure specific parameters were set a certain way (even though I was using BD spec). I had to tweak things like max bitrate along with ref frames, b frames, gop len, etc.

Everything looks good now. However, when I run the prepare blu-ray, DVDA gets to 50% then a little past that and then fails with

Any ideas on this one? Should I create a new thread for this issue? Thank you.

Do you get this error with a Vegas preset for blu ray, video only stream? It would be an .avc file.

If you can't use Vegas, can you copy the video configuration of one of the Vegas presets in your nle? Preferably using the main concept one if vbr.

As mentioned above, I use the NVIDIA NVEnc encoder. I do have the Vegas MovieStudio Suite but not using it in this case. Only using DVDA to author my Blu-ray. I'm using elementary streams, as stated above, so my video streams are .avc files and audio are .ac3 files. All check out fine by DVDA now. What I probably will do is pull my titles and try to author with 1 title, then 2, then 3 and so on to see if it works up to a certain number of titles. I only have 8 in my project.

I have ran into issues with DVDA7 and large amount of titles because the program is 32 bit and has limited memory. You may want to look into a newer program like TMPGEnc Authoring Works if you need a program that can handle many titles. I have done 40 titles on one disc (hi8 DV tapes in AVC) and had no luck with DVDA7, but TMPGenc worked great. It's not as customizable as DVDA7 but it worked. I believe the program has a 1 month trial with no limitations or watermarks.

Otherwise, for one or few titles, DVDA7 should work fine.

Thanks for the tip on TMPGenc. I'll have to check it out. I used this many, many years ago when it was a young encoder. Seems to have grown up. ;) You know, it's crazy stuff. When DVDA had to reencode all my titles which took ~13 hours, it had no issues.

'When using media that was rendered outside of DVD Architect, video buffer underflow errors can occur during project preparation if portions of a video stream exceed the project's bit rate'

I have been fighting this issue with a very large project (32 movies on one disc) for months until I found the readme file .

Using the same bitrate settings in DVDA 7, all 32 movies were copied to the disc without re-rendering.

Thanks for sharing. Will definitely give that a try on the next project. I wound up not using TMPGEnc because I had subs that I couldn't import (horrible limitation).

My solution was encoding with Movie Studio which did the trick. The settings were essentially the same as my NVIDIA encoder but no buffer overflow issue on authoring.