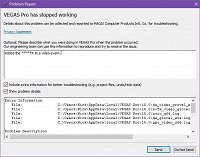 When using Vegas Pro 14/15, if an error occurs, a PRS Problem Reporting Service window will appear.  To send that error report to VEGAS support, place a check in the box to show problem details, then hold down control and shift on your keyboard while clicking send.  This will cause the report to be zipped and a message will appear alerting you to where this report exists on your hard drive.  You may then attach the report to your support ticket.

I don't want to sound argumentative however I have done everything listed. The problem is with Vegas and their refusal to address the problems.

I've tried most of that check list...and I can edit for a while then I get the crashing... The error report window comes up and I 'send' along with a brief explanation...and the situation just seems to deteriorate till I can't do anything. Its the fact that I have been able to multi-cam edit at full speed then it starts acting up that is so frustrating. There's a bottleneck somewhere and I'm clueless...and no response from tech support.

Actually the RPS only appears when Vegas crashes - not when it freezes without a crash :|

When I have an issue with Vegas it either gives an error message and vanishes or just vanishes - no chance to submit a report and trying to submit a support ticket with Magix is like entering some Cretian Labyrinth - really frustrating. Took me around 10 minutes to get through all the irrelevant questions to get to an actual form. Pretty disgusting.

I pinned this post again for a while because the info of Eric's first post is still up-to-date.

Hi I downloaded and installed Vegas Pro 15 a few days ago and have just realised that the BCC transitions that are now listed in Vegas Pro 15 need to be registered. Having looked at the information about installing and activating Boris Continuum 3D Objects on the Magix site, it tells me to go to Help and Free Downloads then to Download Manager. Neither of these elements exist under the HELP although under further investigation it seems some elements might be missing if not logged in with administrator rights. I'm logged into Windows 10 with administrator rights and vegas pro 15 was installed without problem. So how do I install the Boris Continuum 3D objects? Anyone got any ideas please.

@paul-priestley Please open an own new discussion for your problem. This discussion is for the use of PRS only.

I've submitted via PRS but have not received any follow up support.  How can I get my issue resolved?

@Bofus What is your ticket number?

@bofus: Was this resolved?

I've had this problem with send error report, ever since pro 13, but not it crashing when rendering. I simply been doing for years, its a bit extreme, but I've been deleting the two applications within programme files, thats ErrorReportClient and ErrorReportLauncher applications, and delete them. I'm now on Pro 15, been doing this for a couple of years now and no more problem. Programme doesn't ask to send error report and shutsdown anymore. My only gripe is the text looking bad within Vegas Pro 15. As for the rendering problem, I've never experienced that yet, hopefully not.

I've had this problem with send error report, ever since pro 13, but not it crashing when rendering. I simply been doing for years, its a bit extreme, but I've been deleting the two applications within programme files, thats ErrorReportClient and ErrorReportLauncher applications, and delete them. I'm now on Pro 15, been doing this for a couple of years now and no more problem. Programme doesn't ask to send error report and shutsdown anymore. My only gripe is the text looking bad within Vegas Pro 15. As for the rendering problem, I've never experienced that yet, hopefully not.

@derek-kingsman  do you mean that when you delete the 2 program files then a) you do not get the "Vegas stopped working" pop up and b) that Vegas does not shut down ??

I ask because I have seen the "Vegas stopped working" pop up many times - but still Vegas has been working well below that pop up i.e. continuing previewing etc. for a long time - and it continued until I "sent" the "error report" - and this making Vegas disappear from my monitor.

When it was under 13, I used to get this shutting down on me, especially when opening the programme and whilst progressing with the video and adding effects/transitions, it would ask to send an error report and then shut down. So I, for an age, started working with several ideas, and came upon this extreme part by accident, I must say and has worked ever since. I didn't have that problem anymore, I could edit video and not have the problem with it sending the error report and still continue with all my work and finish it, from start to finish. Now I may of said vegas pro 13, but I'm pretty sure I meant Sony Vegas Pro 12, I know it was then it started to happen. Like I said I deleted those to files and It never surfaced again. But that being said, I don't know what Magix have been doing, but I Have been using its Vegas Pro 15 as a test, but I haven't deleted those two files and like I said, it has I think been fixed by them. So well done to Magix, for their part.

Hi Th is Jim Martin Erick we have Talked.

You have Gotten Several reports from me.

The BorisFX Plugins that bundeled are part part of the product only work on work one install.Same could be with the other plugine .The only Thing that has More than Activation is The Magix Software.

No, it doesn't. That's what that whole topic is about, see the very first post.

Why haven't they fixed it yet? On the other hand, a good way to get rid of annoying bug reports. 😆

Why haven't they fixed it yet? On the other hand, a good way to get rid of annoying bug reports. 😆

To paraphrase what forum moderators have been told, it's been much more complex and difficult than foreseen, and the developers are working on it with urgency.

So, Nick, you understand this as a purely technical issue of managing the information flow? It could be something as simple as there aren’t enough hands on keyboards, not enough personnel to cope. We have been here before 😉.

Also, there is the small issue of being split over two Continents with stupid time zone-clashing and then our Global Users Groups who are, ultimately, bashing away 24/7. It’s an ill-fit of managing expectations: Our, User-Expectations set against MAGIX keeping to 9 to 5 (here, think Dolly Parton!). There must be some special Scrum Manager/s involved.

No, it doesn't. That's what that whole topic is about, see the very first post.

I understand it in the very first version of VEGAS acquired by MAGIX. But I don't understand it after releasing of two another versions to the market. What more talks about customer service and software development than this? The only reason I can accept and hope is that the developers are re-writing the whole software from scratch – in this case, I think it would be fair to talk about it transparently. Make a start-up for parallel development the whole new piece of software and take my money. In another case, I will not upgrade any future version of VEGAS which has this elementary issue solved. We do not talk here about any open-source software on a volunteer basis. It is producers responsibility to collect the necessary data from users to the fullest extent and analyze them appropriately so that you can respond as flexible as possible to the problems of the product you offer.

@mjry All of your really great points will take many people-hours and that in turn means a lot of money. So, again, we have us “User Expectations” <> Revenue Streams, oh yes, and investors.

I can only imagine MAGIX is experiencing a Chicken ‘n Egg scenario: What comes first?