The 3D feature is not working neither in anaglyph nor in sbs. It was working. Now it is not. This is on separate computers. Is it a Windows 10 problem?

Would you please be kind enough to explain how this issue relates to Vegas Pro on this forum and in what way.

Which Vegas version do you use?

I have Vegas 11, 12, 13, 14, 15, 16 and 17. Up until yesterday the3D feature worked. Now when I try to render in anafglyphI get 2D only (no anaglyph at all) while sbs remains in 2D. Previously this happened with Vegas 16 & 17. The earlier versions worked which is why I use them. Now none of the versions work. I use a Sony HDR TD10 Stereo Camera. If the latest updates of Windows 10 prevent me from working with this then a way around those updates is essential. There may not be many of us 3D film makers but we re still here.

So the render process does not work any more?

Or is the preview not working any more?

I am aware that s3D filmers are few people - however, I am also one of them.

The actual Vegas Pro 19 is still s3D cabaple, too. But the hardware may become a constrain - in my case nvidia 3D vision. Different points may end to run really.

But any change in Windows may be critical beside changes in Vegas updates. So I stick for s3D editing to an older win 8.1 system. Works fine for s3D editing, together with the old Vegas versions as you said.

Neither render nor preview are working for anaglyph.. None of my previous versions dating back to 11 are now working. I am trying sbs rendering now.

This has always worked with certain project settings for s3D only. But if you do not become more specific, about the version used and your settings, nobody can check that.

"But if you do not become more specific, about the version used and your settings, nobody can check that."

That is not specific really.

Which version do you use now for your testing?

What are the project settings for s3D, what the preview settings? That interacts unfortunately.

Is the GPU support enabled or disabled?

The best would be to have screenshoots from your used settings. 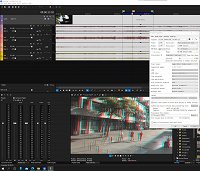 I just doubt who still prefers such chintzy "3D"film.

I just doubt who still prefers such chintzy "3D"film.

3D was a gimmick in the 1950s and again around 10 years ago. I've only ever seen two 3D movies: "Alice in Wonderland" in a cinema, and the other one I can't remember on the world's only ocean liner. They looked great. I've got two TV displays that came with 3D technology and glasses. Even though having bought a few 3D Blu-Rays, have I ever played them in 3D? No, never. From Wikipedia's page on 3D TV:

As of 2017, most 3D TV sets and services are no longer available

I don't think that cinemas have continued with 3D either.

With discontinued technology which current technology like current Windows 10 updates doesn't support, it would be a good idea to keep an off-line computer with an older supportive OS in order to use older programs/apps that are no longer supported. I still have an old Dell computer with XP that I can use for now discontinued technology going back to MiniDV cassettes from some 19 years ago (egad! Is it that long ago?).

But any change in Windows may be critical beside changes in Vegas updates. So I stick for s3D editing to an older win 8.1 system. Works fine for s3D editing, together with the old Vegas versions as you said.

Yes, keep the computer permanently off-line. Windows 10 updates can be delayed but not prevented from eventually occurring.

no, I didn't mean that way.

I self am still an enthusiast in real 3D film (not that anaglyph one), I have had the same hdrtd10 camcorder, an asus 3d monitor is still in my living room - an almost 10 years old one whose Nvidia glass has been lost somewhere.

I just mean, if the industry stops something, then we have no choice but to brake: you can't find a 4k 3dmonitor or alike in the market.

I have many "know-hows" to create an 3d film but nowhere to show it.

@Yelandkeil  ... I am not sure where the difference is - I think we're saying much the same thing but perhaps in different ways.

if the industry stops something, then we have no choice but to brake: you can't find a 4k 3dmonitor or alike in the market.

3D is not chintzy. The dull people (the educated) referred to motion pictures as entertainment for the masses. They were blind to the exciting art form being born under their upturned noses. 3D has had and is having a long and difficult birth. It is an exciting medium. 2D images literally are emotionally flat. 3D has gravitas. I use 3D projectors. There are many available. They give a way better image than any TV no matter how large can produce. I had Vegas 18. Don't care for it.

So you use here Vegas Pro 19. With VP19 I do not get an external s3D preview too. Confirmed.

I am one of those people that can't watch 3D without getting sick. My mind can't accept the fact that even though there is 3 dimensional screen, I can only focus my eyes on what the director wants me too. I am constantly trying to focus on the background or foreground objects that are on the same plane.

1, we are literally discussing about 3D-format videos, not the human mentality.

2, chintzy is my personal op1nion about the anaglyph format, private and mad.

3, even in the newest VEGAS19 you can produce any kind 3D film, and this is the kernpunt to your concern.

I am not so sure if it is possible to produce any s3D film in the actual Vegas Pro 19. Without an working preview, you are not able to assess the s3D adjustment really. Sure, with cards like my Blackmagic Decklink 4K an external preview is possible too - BUT as you have said: find a suitable Monitor for the preview today on the market.

That is why I have my frozen Win8.1 system, because here the preview with nvidia 3D vision and older Vegas version still works.

And even the HDR grading has some issues at the moment in Vegas.

In days as I edited with my Asus 3D monitor (external), I must turn it in 120Hz-sidebyside half modus and set my project also as sidebyside half, because my graphic card wasn't Nvidia pro card.

after activating the Nvidia 3dglass, I could then judge and adjust the field depth.

With VEGAS19 I tried I see everything in the preview window and the external monitor (a normal 4k60Hz HDR10monitor), only I can't interleave the 2 half pictures in a 3D one.

It's unclear whether you can install the 3D driver in a extra way and/or it still functions. I mean the N-card today.

With an nvidia 3D monitor you did not need SBS-Half settings for the preview. That was true for passive monitors.

So, to stick to an old Windows system is the best we can advice, I am afraid.

I use now an AMD card.

As said for my case, everything is there, you only need a proper monitor that can decode your signal into 3D picture for watch/judge.

Otherwise nothing changed in VEGAS. Here are 2 none-standard samples I made in VEGAS19, source is HDRTD10-clip: As you can see I am getting 2D instead of anaglyph with each version. The SBS feature works.

The output to anaglyphic or sbs half was never a prefered output (at least for me). I prefered to use the mvc encoder, but that workes for 720 50p/60p or 1080 24p only. I have not tested if that still works.
And please tell me, dear Yelandkeile - where to take a preview monitor? From ebay?
Reginald, you will not be happy with Win10. As said before.

I prefer sbs. I use anaglyph for posting on youtube. Yes, I understand Windows 10 has mucked this up. It is for Vegas M S P to find a patch or a solution to this. Hopefully, they will.