I was supplied with video (from DV camcorder) where date/time was added in the video during recording.

So I cannot do any video stabilization and even pan/crop as the timestamp text is moving and this looks awful.

Is it possible to remove the text somehow? For example by getting missed data from nearby frames as some stabilizers do with borders? Any hints on plugins/programs that can do this?

The Cut Away FX plugin from NewBlueFX has proved useful for me over the years for surgically removing unwanted (usually small) objects replacing them with similar images from surrounding pixels. The success of this approach very much depends on the content of the image - sometimes it works; other times it looks awful. Given that the time stamp is probably large-ish, there would need to be plenty of surrounding image similar to that underneath the time stamp. Sometimes, I've had to use 2 or 3 Cut Away FX to achieve a good result to remove just the one object, especially if the object is not rectangular or circular in shape.

You can try Delogo, but I suspect you won't be very happy with it. If there's a lot of movement in your date/time, the result will be a lot of movement in an amorphous blob--especially with low res footage. I tried that repeatedly with old Hi8 footage converted to DV and finally settled on just adding a date/time png image that completely covers the moving text. It may not be the most attractive, but at least your attention is not always being drawn to the moving text or moving blob. Just an alternative to consider.

Unfortunately, covering the text with image is not an option in my case. The text is huge: 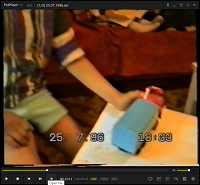 I'm almost sure that I will not be happy with result :)

However, who knows? Ten years ago I know nothing about avisynth's upscaler and was really impressed. The same way I was very impressed with deshaker, neatvideo and some other programs.

P.S. It is better try and learn something new then do nothing.

Agree that it's definitely worth a try.

Another option would be to try Adobe After Effects content aware fill option (which I don't have). Apparently, this option was introduced in the last year or so.

Another option might be Photoshop. I have been using some of the Content Aware options in Photoshop for years which work amazingly well in certain situations. If you do have Photoshop, you could export from Vegas as an image sequence and then create your mask and do the fill in Photoshop. You should be able to batch process such an operation and then re-import the images back into Vegas.

Tried Delogo (VDub) and InpaintDelogo (avisynth). Was not satisfied. You knew that :)

Looks like both programs only use one frame to re-build the missed part(s).

Going to try Prodad ERAZR (trial) to check if it can do this.

Going to try Prodad ERAZR (trial) to check if it can do this.

@fifonik - I’ve bought E, bad mistake, you won’t like it. Apart from NOT having an UNDO f you haven’t got enough underlying REPLACEMENT frames, it’s a bust. Oh yeah, I run MOCHA PRO, so I know what should happen, anywhoo try it and report back.

@Grazie in this scenario where the time stamps are static what is proceedure with mocha pro removal. Should it be an auto, walk away and let it run job, even for a 30min video because you aren't really tracking the time stamp you just need to key frame it?, so the track shouldn't move anywhere or is it time consuming and have to monitor it?

@lenard-p - Yeah, but what are yer gonna replace it with? Need to make Clean Plattes. There’s a great MP YT about doing complex Layers. I’ll try and search it down.

That's a good point @lenard-p I thought about suggesting the Mocha Pro removal tool in my earlier comment, but didn't mention it because I couldn't see how it would work in this situation other than if you were removing the time stamp area of the image and replacing it with a plate (still image) as demonstrated in a couple of BorisFX tutorials on the Removal tool.

The most common use of the MP Removal tool is to remove a moving object from within a usual static or stable shot, the Removal tool replacing the chosen tracked area of the moving object with a frame from within the same shot which is clear of the moving object. The method is to create a spline around the object and then track it, possibly adjusting spline keyframing along the way if necessary. Then create another but static spline covering a much larger area of the image that includes all areas of the image in which the tracked object spline occurs. The Removal tool then compares then replaces the tracked object with similar frames the tool finds within the 2nd spline that do not include the object.

It is often miraculous what it can do. In the past, I've not had success with MP's Removal tool in removing a static object from within a static shot (because there were no frames at all within the shot that showed an image of the what was behind the object that I was wanting to remove), but I did get success with using NBFX's Cut Away plugin for the object removal.

If there is a method of removing a static object using MP's Removal tool, I would be most grateful to learn about how to do that. While writing this, I see that Grazie has said that he will seek out a MP YT. It will be great to see this if he's locates it.

With regard to the need to keyframe MP splines. If the area covered by the spline is static and does not have any movement, then just hit save within MP and all it will work. But if there is any movement in the image that the spline needs to follow and then the track may require keyframe adjustment during the track, depending on how accurately the track follows the object/item being tracked. For example, tracking a picture frame within an image that is smoothly zooming/panning/tilting may not any keyframe adjustment, but a track of a moving person will possibly need keyframe adjustment at some point during the track. It's so very dependent on the characteristics of each shot.

If there is a method of removing a static object using MP's Removal tool, I would be most grateful to learn about how to do that. While writing this, I see that Grazie has said that he will seek out a MP YT. It will be great to see this if he's locates it.

This is purely about the need to create Clean Plates; how to feather them in and layering in those elements. I’ve used this process to Remove a Wall Plug I hadn’t been aware of whilst filming a politician. Used a Clean Plate created in PSP. It worked.

@Grazie ... thank you for locating that tutorial. I think that I need to revisit how I do Removal because the example in the YT shows the splines located out-of-frame, but when I do that the track usually collapses.

The tutorial highlights the use of Photoshop, but I think that anyone with Corel PaintShop will be able to achieve a similar result with PaintShop's own clone tool.

@Dexcon - Yup, I did it in PsP, now that would be Affinity Photo.