I seem to remember that older versions of Vegas were using extremely fast 720x1280 MPEG-2 encoding.

Is this adjustable or changeable? Can V18 be set to encode proxy's in MPEG-2 again?

I'm looking everywhere but I dont see any proxy MPEG-2 or H.264 option. I'd MUCH rather see proxy back to MPEG-2.

Use Happy Otter Scripts / Proxy Assist and make them anything you want.

Manual way: you can render it to your own preferred format, then rename the media to match the 'original file' plus added *.*.sfvp0 in the end.

Detecting additional *.*.sfvp0 file besides the original file will makes VEGAS Pro thinks the proxy has been made.

New HappyOtterScript coming in the next build--KwikProxy. Here's the UI. 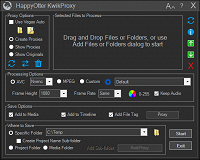 It has options for both AVC and MPEG2 and creates proxies for either Vegas workflow (1) use of sfvp0 as suggested by Set or (2) actual swap between proxy and original files. The tool ProxySwitch works for proxies created with this tool as well as the older ProxyAssist tool if one chooses the 2nd option.

The main advantage, however, is that it is very fast compared to Vegas since proxy creation occurs "before" adding the file to the timeline. For example, during testing I used a 4K 60P 422 HEVC GoPro file as shown.

Here are the proxy creation times for this file in seconds:

As you can see, the Nvenc render was roughly 7x the speed of Vegas that also use Nvenc for proxy creation. Note that my system only has an Nvidia 1050ti for Nvenc renders. For anyone creating proxies with UHD and above footage, this tool can be a real time-saver.

Thanks! How much is this? I'm only interested in this one tool.

Here's the link to the HOS website where you can find licensing information. https://tools4vegas.com/

Since you're interested only in proxy creation, my suggestion is to wait till the next build is released--probably within the next week--and get the 30 day trial license to see if it meets your needs. At the moment, HOS is an all-or-nothing package.