VEGAS Pro 15 has a new decoder, so4compoundplug.dll that reads AVC and XAVC-S files. I think the intention is that it will also handle m2ts and perhaps other formats in the future.

The benefits of this new decoder include:

However some negative issues are attributed to this new decoder. In particular:

If you experience any such issues, or any other issues with AVC behavior in VP15 that you did not experience in VP14, then first check which decoder plugin is being used by looking at the "Plug-In" section at the bottom of the VEGAS file Properties window (accessed by right-clicking on a file in the VEGAS Explorer window then choosing "Properties", or right-clicking on a video stream on the VEGAS timeline then choosing "Properties" then "General" tab): 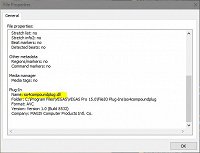 If the troublesome files are getting decoded by so4compoundplug.dll then you can try disabling it as follows:

With luck, VEGAS will now instead attempt to use an alternative decoder such as compoundplug.dll to decode your files, which may solve the issue.

Note that in VEGAS Pro 15 builds before 261, more formats were decoded by so4compoundplug, and this caused the following issues:

Edit 1st December 2017: In VEGAS Pro 15 build 261, troublesome GoPro, DJI and Xiaomi Yi formats have been put on a new "blacklist" that makes them fall back by default to opening with the compoundplug decoder, which generally works very well with these formats. Read the thread for the full story...

Edit 6th June 2018: In VEGAS Pro 15 build 361, the blacklist was made into a separate, editable xml file. In this build the file needs to be moved in order for it to work. Other formats such as XAVC-S can also be added to the blacklist if necessary by editing the file (with great care). Full details in this post.

I was having poor playback performance through transitions and other composite elements. This has brought It back to Vegas 14 levels.

Don't forget you've done it! You will probably want to set it back in the future!

Thank you, Nick. That fixed a problem I was having with variable frame rate files from an LG smartphone. In Properties, Vegas showed constant frame rates of 29.97 when actually they were variable at approx. 30.65 fps. Smart resampling would not work correctly. After disabling the so4compoundplug.dll, I'm in business again.

Thank you Mr. Hope. This new "feature" in fact resulted in no audio at all from H264 video clips that played fine on the timeline in Vegas Pro 14. I find it incredible that this was not checked before release, that a bug report was not sent out after release, and that this was not fixed immediately (since it is obviously known) in a new build. I wasted many hours trying to fix this. It is bad enough that there is a scant number of new features in 15 over 14, but to have a major bug due to one of the major ones is more than incompetence. I am going to post my experience in all the forums I contribute to. Magix needs to step up. They are going to lose many users with this kind of greed (high price for very little advances), lack of support, and plain stupidity.

Totally understand your frustration, but please remember this is a user forum, and most people don't enjoy reading lengthy BOLDTYPE posts that are obviously quite angry and aggressive. Your anger needs to be directed elsewhere. Thanks.

Going back to the previous .dll solved my transition low frame rate, too.

But it also made opening the pan/crop tool and moving the crop window around very slow. And playback frame rates are lower (in multicam). So I turned this back on and will live with the lessor evil of slow frame rates on transitions (the default crossfade).

Thank you Mr. Hope. This new "feature" in fact resulted in no audio at all from H264 video clips that played fine on the timeline in Vegas Pro 14. I find it incredible that this was not checked before release

I have here XAVC I files from my FS7, what is H.264 - and audio is decoded without an issue.

I have also some H.264 files from my Samsung - and Audio is decoed without an issue.

So not every footage Shows that issue - but some file Format do. Your footage is the footage that you have reported here?

V15 AVC render is 35% slower than V12 AVC after disabling so4compoundplug.dll, and does not read GH5 10 bit files. I hope Magix will fix this soon.

The so4 dll that you disabled is what is needed for gh5 10 bit files, etc. I am pretty sure fixing this major component is very high on the list.

Nick, thank you for this excellent tip! I was about to report this to Magix support but saw your message just in time.

Now the same project opens as fast as in VP14.

I had disabled the so4compoundplug.dll because of problems I was having with variable rate video taken with a smartphone. After trying a few different camera apps, I found one that works very well with so4compounding enabled. The results are better than with the so4compounding disabled, so now I  have enabled it again.  I guess it depends on a combination of camera, app, shooting conditions.

Nick Thanks for the suggestion. I tried this and it works for the most part. However, the timeline still won't play smoothly on a still photo which has zooming/burns effect applied. Is there any way of fixing this?

...After trying a few different camera apps, I found one that works very well with so4compounding enabled...

...After trying a few different camera apps, I found one that works very well with so4compounding enabled...

Nick, The app I thought did the trick was Open Camera or Cinema FV-5. The caveat is there must be really good light when taking video, so that the frames-per-second will mostly be the same throughout. There are cases where the frames-per-second has ranged from 10 to 30 fps in the same clip when light is less than optimum. That causes problems for just about any video editor I have. I'm now using the Feiyu On app with a Vimble C 3-axis stabilizer and have again disabled so4. But every once in a while I enable it to see if that improves troublesome video. I also use the script for quantitizing to frames, but I make the undersampling rate 1.000. That works better for my video.

Depends on the codec and media you are working with.

When your media not needing so4compound, I guess, it won't be an issue. but, if your media depends a lot with so4compound, I can feel VP15 quickly becoming slower. Well, hopefully this issue fixed in the first update.

Regarding variable frame rates from my smartphone mp4 files, I took drastic action and used a hex editor to modify copies of the mp4 files so the durations in the 'stts' box are all the same (0xBB8), which equates to a constant 30 fps. When I load this in to Vegas with so4compound, I stretch the audio to match the video, and disable resampling. The video plays back very smoothly with or without so4compound.

I've had a completely unrelated problem for two full days and disabling "so4compoundplug.dll" has finally fixed my issue. Thanks for this sage piece of awesome advice. This new decoder locks media in the oddest way I've ever seen even after a project is closed.

As soon as I try to delete a media file from within a Vegas script, the file is locked, all permissions disappear, the file has no read access and can't even be deleted externally. The lock is only cleared by closing Vegas.

For two full days, I've been tearing my hair out trying to find a workaround. Everything works fine in Vegas 8 through 14 but this new version has caused me grief.

I've simplified the process to reproduce the issue for any Vegas developers following this.

I've had a completely unrelated problem for two full days and disabling "so4compoundplug.dll" has finally fixed my issue...

@mickhardy Could you please report this at https://support2.magix.com/customer/en/vegas/form , giving as much information about the problem as possible, including this step-by-step procedure? That's the best way to draw the developers' attention to bugs and get them into their backlog. I would do it myself but you probably have a fuller grasp of the issue then me.

I've submitted a support request although it seems like an odd place for a bug report. Thanks for confirming the issue. I tested on two machines reset to defaults with cache cleared before posting.

Could this also cause:

1. Slow overall performance of Vegas 15, popup windows for FXs for example take several seconds to open and build up every time, making the workflow very slow.

2. AVC files not having the correct name after rendering, but instead have names like Myvideo.MP4.TMP ? This only happens with Sony AVC output, but it also has been happening in vegas 14 the last few months I used it.

PS: Which format is easier to handle by Vegas 15 in general, AVCHD or the MP4 format from a Lumix GH5? They look the same quality to me, and the files sizes are also the same, so I'm unsure which one to pick.

Could this also cause:

1. Slow overall performance of Vegas 15, popup windows for FXs for example take several seconds to open and build up every time, making the workflow very slow.

I didn't try disabling the so4compoundplug.dll, but I experience this...

2. AVC files not having the correct name after rendering, but instead have names like Myvideo.MP4.TMP ? This only happens with Sony AVC output, but it also has been happening in vegas 14 the last few months I used it.

Here's are my findings related to so4compoundplug.dll in VEGAS Pro 15 Update 1 (build 216):

I'm told the developers are working hard to resolve these issues.

The OP has been updated with the latest info.

VEGAS Pro 15 Update 1 (build 216) has not fixed the file locking issue when "so4compoundplug" is enabled.

Magix did reply to me saying this was a known issue.

Edit: The new version triggers a Vegas Pro has stopped working error on exit after running my test scenario with "so4compoundplug" disabled. The file is deleted fine but Vegas crashes when you exit.

I am having problems with garbled /crackling audio played back on the timeline from Sony A7S XAVC-S codec.

Is it still recommended to disable the so4 decoder? I can see where to do that, but don't see "Show only pref containing:" file type "So4" under the Internal Preferences tab.