The Vegas Creative Software Support Community – Find help here
dirtynbl wrote on 1/29/2015, 11:44 AM
One of the absolute worst feature of Sony Vegas since like version 3 has been Vegas's insistence on resampling clips imported into a project that aren't at that specific project's frame rate. However Vegas does this introduces all kinds of ghosting and weird blurriness. Disabling this in the properties of each clip is possible, but must painstakingly be done clip by clip.

Is there a way to disable resample by default or even better permanently?

48 Answers Go to solution
Back to post
WayneM wrote on 3/23/2015, 2:11 PM
I just double-checked (no pun intended) and Options/Preferences/Editing does have "enable looping on event by default" Unchecked. Go figure.

So I caught that at sometime! I thought it was long before this current project got started. So either I'm wrong OR I started this project from an earlier file from before the Pref was changed. . .but that doesn't make sense either.

Thanks for reminding me that's where that setting is located.

Wayne
johnmeyer wrote on 3/23/2015, 7:07 PM
I just searched the API (VegasScriptAPI.html) and wasn't able to find any of that info, but they may be useful. Maybe I'm looking in the wrong place.You did try it, right? I tried it before I posted, and adding that one line does exactly what you want.
WayneM wrote on 3/23/2015, 7:30 PM
Sorry, at that time I hadn't yet put it in the script. First I wanted to see if I could track it down in the API so I didn't have to annoy you unnecessarily! :-)

Next, I put the line in, saved as a new script labeled to do both Resample Disable and Loop Disable. Works like a charm. . .of course.

The thing I've told myself to remember is that it make the change to ALL events with that property. I'm thinking there might be some Events where I have unintentionally had Loop enabled and that made a Title or something last as long as I wanted just by dragging and edge.

I'm going to search the Vegas Scripts area to find out how to create a button for my scripts on the Toolbar. I think I did that some years ago. That's easier than navigating the menu. And it seems that by the time I migrate to the next release I've forgotten how to do it. Creaky Brain Syndrome.

johnmeyer wrote on 3/24/2015, 5:49 PM
Are you saying that you want to modify the script so that it only works on selected events, rather than ALL events? That is pretty easy to do. You must add an outer IF statement that tests for "if event is selected" and then only apply the two changes when that condition is true. You can also do a similar thing to only change events on selected tracks.

Rather than add a dialog, which takes more time, you can just have two scripts, one that changes everything, and the other one which changes selected events. Then, run whichever one you need at that moment. In essence, you are moving the choices in the dialog up to the toolbar (or wherever you keep your list of scripts).
TRJohnsen wrote on 4/8/2015, 1:02 PM
I have Sony Vegas pro version 13 and Movie Studio Platinum 13.
I do not know if this is possible in previous versions.
I mark all event on timeline, not the sound.
Or, hold ctrl.key and click to chose witch one you want to disable resample on.
Right-click, popup menu appears, here is a selection of switches.
Chose disable resample.
This disable resample at all event on timeline.

"I do not know if this is possible in previous versions."

I verified that all versions of Vegas Pro 9 through Vegas Pro 13 allow one to disable resample as you described with a context sensitive right-click menu at the track level.

MikeyDH wrote on 5/20/2015, 2:22 PM
I copied and entered the disable resample scripts offered but keep getting an error message when trying to apply them to the timeline. Used both the .cs and .js extensions. Puzzled. Never had this problem before.
ritsmer wrote on 5/21/2015, 7:08 AM
... and after having got 2 new cameras with different Fps etc. this script is needed all the time here - and it works great (Vegas Pro 12) ...

If Vegas 14 comes with a setting to permanently kill that %¤#/ "smart" resample - then please consider this to be my preorder of V 14...

Scripting is available only in the Pro versions of Vegas, not Movie Studio.
Gene Aum wrote on 4/8/2016, 10:33 PM
Strange thing happened: I put the script in the approprate folder, and successfully used it a few times.

After rebooting the computer the script file was no longer in the folder.

So, todayI re-copied the file and set the read-only bit. See if this happens again.

Steve
Chienworks wrote on 4/11/2016, 4:47 PM
"Correct me if I'm wrong, but isn't the re-sampling essential if one is mixing different source media formats, or have media that is different to the overall project specs ?"

Geoff, i don't think anyone ever directly answered your question, so here goes:

If the project frame rate doesn't match what's on the timeline, either through the source frame rate being different or the event being changed in speed, Vegas will resample. It's the physics of the thing and just has to be done. What that switch affects is how the resampling happens. I guess the name of the switch is misleading. The three choices really ought to be "force smart resample, auto smart resample, and disable smart resample".

Smart resampling (also a bad name because it's not very smart at all) blends adjacent frames together when the rates don't match. So if you put 30fps on a 24fps timelline, your output frames would be something like this:

No blending happens. So, with what Vegas calls "resampling", you can end up with doubled images warbling in and out of the finished output. The attempt is to make the motion smoother, but the result looks ghostly. With resmapling disabled you always end up with single frames rather than blended frames, but at the expense of doubling or dropping a source frame which can result in ever so slightly jerky motion.

Some folks object more to the bending/doubling, while others object more to the jerkiness. It just seems that in reading the comments here far more fall into the first group than the second.
placeboing wrote on 7/10/2016, 9:48 PM
Thank you for the Disable script! This is great!
TheVeggieNerdYT wrote on 1/29/2020, 5:30 PM

I think it is enabled by default because of slow motion. If you Ctrl-Drag the edge of an event to slow it down, and if you then disable resamble, you get pretty lousy slow motion, with frames repeated, as needed, in order to get the slower speed.

This old, simple script, will turn off resample on all events:

In case there are those who do not know, the script from johnmeyer can be copied and pasted into Note Pad minus the line that says, "Code Block:", saved as name.js and then put in the Vegas script folder.

'name' = whatever name you want to give it.

I used options to edit the tool bar and added it to the top so I can use it real easily with one click.

P.S. Seems with all of the discussions there has been on this subject that SCS would make the needed change by now.

These two comments. I signed up just to say thank you. I learned so much just now.

Doesn't Vegas Pro not have an option in Project Properties to Disable Resample, so it applies by default to all clips added to the timeline? You don't need to play with scripts any more.

This is an old thread so this was probably introduced at a later date. I don't know with what version of VP it came in.

Edit: Disable Resample was introduced into Project Properties with VP15.

"This is an old thread so this was probably introduced at a later date. I don't know with what version of VP it came in.

Edit: Disable Resample was introduced into Project Properties with VP15."

Eric, Global Disable Resample was introduced into Project Properties in Vegas 14. That is the one and only reason that I start all projects in Vegas Pro 14 instead of my long-held habit of starting all projects in 13-453. 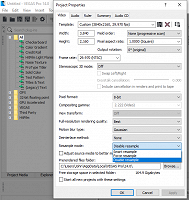 Thanks @john_dennis, that would have been Sept 2016 and the first release under Magix.

History says the default of "ON" for everything dates back to the 1800's when people were converting things from 60i. 60i was banned by world governments around the time of the Salem Witch trials, and is thus, not used anymore. It should be DISABLED at power on, and only added by users when needed. At least that is what Abe Lincoln wrote.