Hi, I don't know if this should be in Off Topic, 🤷‍♂️ I've edited video for 20yrs but have 0 audio experience apart from using the volume button 🤦‍♂️😂

In my clips quite often there's the loud noise of the machines I'm using, then I'm talking or just the natural background sound,

Does anyone know how i can reduce the noise in those clips automatically or a bit easier?

This is an example if anyone wants to try it, my voice is really quiet on this, i think the microphone's knackered from filming the noisy machines. https://drive.google.com/file/d/1QmDsTb6nU41wQAsP_55p-eDXg_y4MKu2/view?usp=sharing

You could try a compressor or limiter. I just tried with the default track compressor audio effect. Picked the hard limiter preset and reduced the threshold even further down. 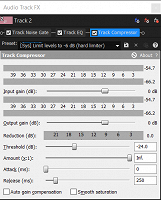 Or the same thing with wave hammer surround audio effect. 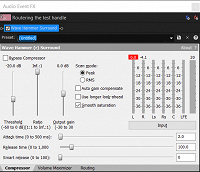 This is poss a better example,

You're right. Those settings won't work for every clip. The idea was to set the threshold lower than the noise but higher than your voice so that the compressor reacts to the noise only and leaves the voice alone. However, if the noise and the voice is about the same volume there's not much you can do.

You could also duck the noise manually by using volume envelope and turning those sections of audio down. If you make a time selection you can just drag the envelope up or down and it should create the points for you.

@misohoza Thanks i didn't know you could do that with the Region, I either used the Add node on the envelope or ended up cutting the clip into bits & reducing the volume on those bits, but selecting the loud bits with the region I can reduce the noise & my voice parts I can turn up the volume, I can adjust it easier later also because the event isn't chopped up into pieces 👍👍 Thanks again, I think that'll do me, with Region i could also add Region markers, 👍😁

Here is a screen shot of the audio track's waveform in iZotope's RX10 Advanced:

... and a spectrogram of the same audio:

With the power tool sound, it is just a matter of highlighting on RX's timeline the power tool sound and reducing the volume to a more acceptable volume - I recuded it by 12 dB. Also. the sanding sounds can be reduced the same way but but maybe by only a few dB. Also, notice that the L channel audio is much stronger than the R channel audio. The volume of the R channel can be raised if so desired.

Again highlighting on the timeline the snippets of the audio where your are talking, I used RX's 'Dialogue Isolate' to raise the volume of your voice without raising the volume of the background noise. I had to do that a 2nd time in thwe R channel so that the voice level is about the same in both channels. Unfortunately, Dialogue Isolate is only available in the RX Advanced version, and is not in the Standard RX version.

The end result is:

This took less than 10 minutes to do - and the audio result is:

From just the volume standpoint, this could easily be done in almost any audio editor (SoundForge Pro, SoundForge Audio Studio, Audacity [free] - all of which can be made the preferred audio editor in Vegas Pro and therefore directly accessible from the audio event on VP's timeline) by highlighting segments of the audio track on the timeline and reducing/raising the volume/gain as desired. But when raising the volume of the voice a lot, any background noise will also be raised so that could mean additional work in having to use a noise reduction plugin.

Sony Noise Reduction 2.0 plugin works well for this type of constant background noise if you have an area where it is isolated to be analyzed by the plugin. The "noise print" is then subtracted from the original audio signal.

This function can also be found in Audacity, which is free - under Effect / Noise Reduction.

Thanks everyone, I have Audio Studio 15, just spent 40mins trying to simply work out how to reduce the volume on the selected region........ I've tried all the Workspaces

Volume - opens a little box, why no on screen volume slider on the event.

Help says if you go to Effects - Envelope.., when i do this crappy little box opens.

I've tried learning this Audio studio type stuff in the past & to me it's more hard work than it's worth, the idea is to make this process simple & not fanny around having to open a separate editor for each of the often many clips, when I can just add an envelope in Vegas,

For my simple vids the volume needs to either go up or go down, so i'll be using the Region method @misohoza suggested.

Sound Forge Audio Studio has a (din type) noise reduction tool, similar to (if not the same) as ths NR-2.0 tool, which works decently on constant noise like HVAC and such. SF Audio Studio does not have a volume envelope tool like Sound Forge Pro and Vegas ('V' key) but volume can be changed in regions. AS does have a "Graphic Fade" tool which could be used the interpolate the volume changes so they are smooth.

Here's how I'd do it. By splicing ("s" key) the loud bits and dropping them to a new audio track and lowering the volume of that track, the noisy bits are more reasonable. I also made the entire audio clip mono (Right click--channels, i picked LEFT, but you could COMBINE) just so the audio comes out of both speakers evenly. This took me about 30 seconds to do this, including importing the video.

@flyerstl Hi & thanks, but i have 389 videos on YT & a lot of them 20mins+, that's pretty much what i've had to do with 90% of them so I was hoping for a more auto way of cutting the noisy bits down to an acceptable level without cutting it up or having to open a separate audio editor as others have suggested, sometimes there's 30 or more clips to one project & it'd be a pain opening up a separate editor for each, or if cutting them as you show it's easy to loose track when there's so many cut up bits, as in your pic that short clip became 6 parts, times that by 10, 20 or 30 clips to edit the timeline can become 100+ pieces, , but again thanks for the input 👍

@Gid I totally understand. That would be a lot of work. Perhaps the earlier suggestion of using dynamic compression would help. It would have to be quite severe limiting and compression in order to bring the machine levels down, whilst bringing your dialog and other stuff up (which will introduce noise for those bits, btw). But, it would be more 'automatic' and less work for you. Take a listen to the MP3 attached and the screenshot. This is using Wavehammer, which is built into Vegas. I'm using a really aggressive compression setting to knock down the loud parts, and bring up the low parts. I did this aFTER combining the two-channel (stereo) original audio track into a mono track first (because your voice was more on the right channel than the left). I hope this helps a bit. jmm 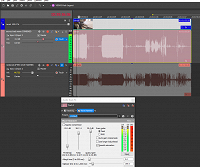 Be aware, Wave Hammer will add distortion when pushed . It is sought after effect for many music mixers though..For a narrative programs and such, I would choose a cleaner compressor and secondary limiter when moderate amounts of leveling is needed. Wave Hammer II is somewhat cleaner and does not have the 'distorted; FET sound. There are many many others for free.. and otherwise.