So im new to video editing and im using Sony Vegas 15 ive looked into this topic alot and its the topic of whether i should use "Sony Vegas Levels FX" as an output. The preset which is "Computer RGB to Studio RGB" gives off a fainted....white/grey washed out look to the video which i personally dont like, like its completely washed out the colors although (im not trained to the eye like some of you). The preset which is "Studio RGB to Computer RGB" gives off a lovely darken and more vibrant look to my project.

Are they correct?, should i use the washed out preset "Computer RGB to Studio RGB" then edit with color corrector to get the color back into the project, and let Youtube process this video to make it more dark and vibrant?. As i said im new so i might not understand most "Technical replies" but i would appreciate the help. cheers

Yes, in most playback scenarios, you'll see more contrast on YouTube than in your default VEGAS preview window. Some explanation and workflow tips (follow the links within the first one):

Thanks for the reply Nick, your links are very informative a bit more advanced than what i know. So your saying i should render with the effect preset "Computer RGB to Studio RGB" then let Youtube add its darken tone, if so then ive just done a few tests and it does seem like the correct way to do it and it looks good

I don't think YouTube "adds its darken tone". It's players that do this as they are usually set up for Studio RGB and stretch out the RGB range to look normal. TVs in my experience do the same. The links Nick gave you should explain.

If your camera shoots the full range from 0-255 then a crude but effective fix to stop excessive contrast and clipping in a rendered video is to add a Levels FX to the event(s), track, or video output and select the "Computer RGB to Studio RGB" preset (i.e. the opposite of the "monitoring fix" in section 2 above), and leave that FX enabled when you render.

I have put this effect to use and it works..thats all i know?, sorry if i cant explain alot i just dont know much as of yet but basically i used yhe effect as i rendered and my youtube videos are no longer "as" dark on youtube

Does that look okay?

Does that look okay?

Depends on the footage. Some highlights will clip, but they may be specular highlights that you're happy to clip.

There's not a lot below 16 on the waveform. If that's your "black" then you have a camera with black nominally at around 16, and you don't want to raise the black point any further.

A screen grab image would be useful

What camera are you using? You can do the tests in this post to see what levels it shoots.

Im recording gameplay on my pc, no camera just catured by obs, what should i study specifically in vegas to improve my knowledge? so i know what these graphs mean? i really want to create quality content

Im recording gameplay on my pc, no camera just catured by obs, what should i study specifically in vegas to improve my knowledge? so i know what these graphs mean? i really want to create quality content

I don't know a quick resource to learn about the levels stuff from the beginning. We have a post of tutorials here: https://www.vegascreativesoftware.info/us/forum/vegas-pro-tutorials--103245/

A screengrab of your footage at the point where you screengrabbed those scopes graphs would be very helpful in advising further.

These are the same shots of the same frame, what do you think @NickHope

Are you sure you are using Vegas Pro 15 as you're using terminology that harks back to Vegas Pro 13 and earlier when Sony owned Vegas Pro? After VP13, all releases (VP14-17) have been from the subsequent owner: MAGIX.

In the end, it doesn't matter all that much with 'Levels' (called 'VEGAS Levels' in MAGIX releases) as it has remained the same as far as I can tell across both Sony and MAGIX releases.

As you've probably seen from the links provided by Nick Hope, one of the main uses of Levels Studio RGB to Computer RGB is to color grade your project on your computer with an image that replicates that of how it will appear on a TV. When rendering the project, Levels is turned off to avoid doubling up on the darkening effect.

However, with YouTube and the like, there is a consequent problem. If the viewer is watching the YT upload on a TV, then the color grading would be expected to be fine (assuming the user's TV settings are neutral), but if the viewer is watching on a computer, then the image may seem a little washed out unless the user's computer settings compensate to replicate TV settings.

It's almost a no win situation. Is your the majority of your audience watching on a TV or on a computer?

The majority are using phone and computer, the only reason in why im fascinated by this topic is that people say that the "Levels" effect is good to use when uploading to Youtube as Youtube darkens the videos, the tutorials on Youtube talking about "Levels" also say that the preset "Computer RGB to Studio RGB" lightens the darkness so it looks less dark on Youtube - by no means do i accept this claim, all im saying here is what ive learnt on youtube, are these theory's correct? should i use the levels effect if im uploading to youtube and viewers are watching on phone or computer? and if one viewer happens to watch on tv should i use the effect regardless? - cheers for the help by t he way and yes im using Sony Vegas 15

Also with a computer how a viewer sees the levels will depend on the graphic settings and/or the players settings. So not all computer users will see the same. I suspect that by default many consumer pcs have the graphics set to work on "limited range".

And this is without

You use the Levels FX as first one in a row followed by at least three other FX which may affect your levels. This doesn't make sense if Levels FX is meant to control your output. Levels FX must be last one in your chain, not first one.

So in all fairness,

1. I DONT need to use levels

2. I DO need to use levels if i want people to watch on a tv

Are these scenarios true?, if not can you give me a scenario in which you would use sony levels computer to studio rgb?

On my laptop computer, 'without' looks much better.

You use the Levels FX as first one in a row followed by at least three other FX which may affect your levels. This doesn't make sense if Levels FX is meant to control your output. Levels FX must be last one in your chain, not first one.

Cheers for the advice @Marco.

when you squish levels to 16-235 (broadcast/studio), just add more CONTRAST back in until it looks nice again. you can work within that range. I tend to bump the saturation up too to compensate for the loss of the "dark side" which makes richer colors

In what situation would you use Levels?, would it be if you wanted your video to go on tv?. Could you give me a situation?

On my laptop computer, 'without' looks much better.

I may aswell remove levels and just ignore it?, if it looks better without?

On that shot alone I would use a Levels FX something like this:

But I would look at other shots too, to see if the numbers can be refined to make a suitable track FX for all of the footage.

FYI, in terms of the shadows (Input start) I'm judging that on a combination of these 3:

1. Eyeballing it full-screen preview on my 2nd monitor (with "Adjust levels from studio RGB to computer RGB" checked in Preferences > Preview Device to give me WYSIWYG (for most playback scenarios)).

2. Bringing the "clump" of white dots on left of the waveform (representing the deepest shadows) down to just above zero (with "Studio RGB (16 to 235)" checked in the Video Scopes Settings: 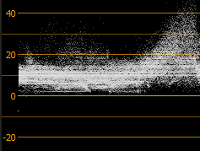 3. Bringing the "shoulder" of the histogram to be just to the right of the 16 line (same as #2 but just another way of looking at it). The stuff to the left of that is just noise. 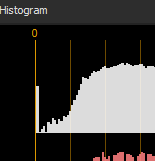 The Input end I just did by eye to brighten the image up. That setting does clip the red channel a bit, and it might really blow out your other brighter shots.

Obviously taste is important. There is "right" and "wrong" if you have to meet levels specs for a broadcaster for example, but not for YouTube stuff.

I use levels 16-235 (studio) ALL THE TIME to guarentee similar looking playback across ALL platforms. saves me the headache of testing across many devices, with many different media players, looking for crushed black or blown white. Sure, it's legacy based, but most everything we watch right now is... until HDR really takes over in about 20 years. but I don't use Vegas Levels except for experiments. I use free AAV COLORLAB as my unscientific tests show it to be a more accurate leveler than Vegas version. it has tons of other useful things in it also

Obviously taste is important. There is "right" and "wrong" if you have to meet levels specs for a broadcaster for example, but not for YouTube stuff. @NickHope

"But not for Youtube stuff" does that mean Levels doesnt matter for Youtube projects?, also @wwjd how do i get 16 - 235?