Does your Vegas preview show less contrast than when the video is played back outside of Vegas? Does the Vegas preview look a little "washed out", without deep blacks or bright whites, like in this example? 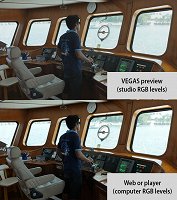 Or does your Vegas preview look correct but the rendered video has too much contrast, clipping detail in the shadows and highlights?

In 8-bit projects, VEGAS decodes many common video formats (including HDV, AVC etc.) to studio RGB levels, and displays that in its preview window. Players such as Windows Media Player and the Flash-based player used by YouTube and other web video platforms usually decode video to computer RGB levels and so you'll see more contrast. In effect Vegas is only displaying within 16-235 of a full 0-255 range, where 0 is black and 255 is white on your display. More background information here: http://www.glennchan.info/articles/vegas/v8color/vegas-9-levels.htm

Many NLEs attempt to handle levels conversion automatically. VEGAS does not, which has benefits as well as disadvantages.

2. DISPLAYING WHAT YOU WILL GET

To get a "what-you-see-is-what-you-get" preview in the VEGAS preview window for such a project you can do one of these things:

If you monitor on a secondary monitor, you can display computer RGB levels on it as follows: Options menu > Preferences > Preview Device > check "Adjust levels from studio RGB to computer RGB":

You should not check this if you have used one of the 2 methods described above to adjust the levels in the preview window, or you will wrongly double the extra contrast.

Note that if you use compositing in a video that uses media that decodes to studio RGB levels, or have fades or cross-fades, the level calculations will not quite operate correctly. You should put a solid color event from the Media Generators window on a track below the lowest unmuted video track. The color of this should be RGB 16,16,16 (actually very dark gray). Since direct RGB input was removed in Vegas Pro 11, the most accurate way to set the color of generated media is to enable "Fixes" in SeMW Extensions and manually type "16/16/16" in the "Color" box. Alternatively you can type "0.063, 0.063, 0.063". In either case it will only show "0.06, 0.06, 0.06, 1.0" after you have done it. You can save it as a preset.

The above guidelines are simplistic, and you may still not get the result you want. It is not an "auto levels" type of magic fix. In particular, white levels may be clipped ("blown out") if your camera shoots highlights above level 235, as many do.

If your camera shoots the full range from 0-255 then a crude but effective fix to stop excessive contrast and clipping in a rendered video is to add a Levels FX to the event(s), track, or video output and select the "Computer RGB to Studio RGB" preset (i.e. the opposite of the "monitoring fix" in section 2 above), and leave that FX enabled when you render.

The best solution within VEGAS Pro is to learn how to color correct in conjunction with reading and understanding the video scopes, so you can set your black and white points etc. correctly. There are several FX tools in VEGAS that can be used for fine control.

Tip: Just Color Picker is a good app for testing what levels your rendered video is displaying. For example you can pause a YouTube video and literally sample what RGB values the black and white areas are from your display.

Suggestions for corrections and additions via comments or personal messages are welcome but comments here may be deleted later as this is an "FAQ" post. Please start a new post or use an old thread to discuss the subject in depth or to raise individual cases.

Nick, consider showing a screenshot of the videoscopes along side each of the pictures in the first example.

Another nice contribution!  Thanks Nick.    Related to item 4 : a "what your scopes should look like" post would be great.

Good suggestions folks. Thanks. Will revisit it.

For clarifying about monitoring on a secondary monitor (if you mean external display/Full screen ?), you don't need to check "Adjust levels from studio RGB to computer RGB" in Preferences if you use the SeMW Extensions with the setting "PC".

The SeMW Extensions links above don't work - but this one does: http://www.semw-software.com/en/extensions/

Yes, that would be really helpfull !

Yes, something needed on video scopes. Not sure if here or a separate post. Will have a think.

Yes, something needed on video scopes. Not sure if here or a separate post. Will have a think.

I think in here is a good place, it is connected. I initially didnt like the SeMW Extension because it somehow didnt work with the levels still coming out wrong. It took me a while to figure out that the scopes needed a different setup, I now have both check boxes unticked when I set the extension to "PC" and that works fine.

Thanks for the suggestion. Not sure it matters if it's a tutorial or an FAQ post as long as it can be found quickly. I have an FAQs index post near completion to pin to the top of the forum that will link to this and lots of other posts, also including this list of tutorials.

I think it matters as the answers to FAQs are like tutorials. If FAQs beome stickies and show up at the top of the heap, then we have to scroll down past them to get to the messages, do we not?

Your index is a good solution, but I think a separate tab or tabs would do more justice to the great efforts of the authors.

I use Video Pro X, not Vegas, but your information explained several things for me. The main one was about using a solid colour event below fades or cross-fades. This also helped me understand why Magix has a mask event under its captions. This is necessary where there are transparencies or else the colours and edges are off. I tried making some captions using Xara as the interface to VPX and found that I needed a solid event even though it was a mask with transparency, underneath the main event whenever there was transparency in the main event. I was wondering why Magix did this.

As well, I ditto the request for including scopes in your "tutorial." VPX also has scopes, but there is precious little information about interpreting and using them effectively. All examples help.

The FAQ section (and/or tutorial, even 'Gallery') has been discussed with this forum developers and still ongoing.

However, while waiting to be implemented, these are the best we can do so far by optimizing the available 'tool' we have here in the forum.

I think it matters as the answers to FAQs are like tutorials. If FAQs beome stickies and show up at the top of the heap, then we have to scroll down past them to get to the messages, do we not?

The FAQs themselves wouldn't be stickies. Only the main FAQ index post. So there would be less stickies than there are now because we can unpin a couple of them once they are linked from the index post.

Your index is a good solution, but I think a separate tab or tabs would do more justice to the great efforts of the authors.

It's a good idea but an "FAQ" tag was requested months ago but has not materialised so we're working with the functionality we have. A "TUTORIALS" and/or "TIPS" tag might be a good idea too. I would like to see them implemented as secondary tags that could be added by moderators in addition to the primary tags (AUDIO, SCRIPTING, VIDEO).

To discuss the forum technology futher, please start a new post in the OFF TOPIC section as I'll probably delete this discussion later, as stated in the first comment.

Should we be concerned about this VirusTotal report about the SeMW extension?

The last time I installed SeMW extension, my BitDefender didn't report about this issue.

Two of these seem to be generic malware detections based on heuristic checks. I can't say what property of the setup program it is that these engines take issue with. It's just a simple wrapper around a Windows Installer MSI file, which should be fairly common.

The "virus.win32.sality.at" detected by the Invincea engine seems to refer to an actual virus that's been around since 2010. This is most certainly a false positive, as none of the other engines see that particular virus in the file.

I'd say, as long as none of the big names find anything suspicious about the file (which is unchanged since October), there's no need to be too worried.

Late in getting here. New VP user. I downloaded the file and Bitdefender says it's a virus and stops it from installing.

I've now uploaded the "naked" MSI file as an alternative, which you can try to see if BitDefender likes this better. Windows Defender blocks this file on the grounds of it being "unknown", so I'm not sure it'll help...

Interestingly, VirusTotal's BitDefender takes no issue with the EXE file.

@Satevis, thanks, that worked! Win Defender is blocking it running but you can run the file if you choose. Bitdefender had no issues with it this time.

Another nice contribution!  Thanks Nick.    Related to item 4 : a "what your scopes should look like" post would be great.

This is how the histogram and monitor should look just before your render, having added the levels correction last. This is not how they should look after rendering.

After doing this for a while you will discover that monitor calibration isn't everything, it's the only thing.

For the rest of the story, read here, but keep it simple!