Short enough to release the slot-tab with my fat finger. Just like in the olden days. Laying down, it can be seen that this version from ASRock only has one fan. The Gunnir version, which has been reviewed more, has 2 fans and runs at a slightly higher clock rate. But same power connection, just like the 1660ti.

Here it is installed, dwarfed behind a 6900xt.

Curious what would happen if I did nothing and booted up without installing an additional driver. I already had the Intel v101.3222 driver installed for the uhd750 built into the 11900k. No A380 showed up anywhere, including in GPU-Z. So next I figured what's billed as the release Arc driver v101.1743. That refused to install claiming it was already installed. Finally, tried what is billed as the Arc beta driver v101.3220. Expected that to bomb out too since I already have 3222, but it went through successfully. After reboot, GPU-Z looks like this: 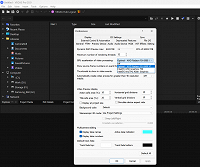 as well as in the decoder list in I/O preferences: 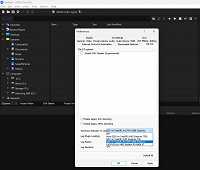 So I can select and test each for decoding. But legacy decoding and qsv rendering would be ambiguous unless I disable the igpu in bios. Which I will do later to make sure I'm running on the A380.

Here's the GPU-Z screen after I disabled the igpu in bios and booted up again. Now the version reads 101.3220, ray tracing now checked, and the logo is replaced with Intel Arc. Must be a little AI in there somewhere.

After completing all the decoding tests I could come up with in this other thread, I think decoding is pretty decent. Looks like this is definitely the board to get if you're into 4:2:2 color and have a xeon, x-series Intel, 9th gen or lower Intel, or a Ryzen cpu. Certainly cheap enough. And if the gamers hate it, might stay that way for a little while. Good for us.

@Howard-Vigorita Yeah, great news if they hate it lol, can be affordable for a little while longer.

Man, if i were you right now, i would not be sleeping tonight or anytime soon, too excited. I would be like a kid in a candy store trying, tweaking and testing everything.

It arrived at noon (10 hours ago) and I'm near burnt. Time to put it on autopilot.

Did a short 4k 60fps 2-camera shoot yesterday and it gave me some meat to sink the Arc into. Set 1 cam for xavc 4:2:2 and the other for hevc 4:2:0. Noticed some curious things. When both the Arc and uhd750 igpu are enabled, Voukoder does not see them unless Vegas is set in Windows Graphics to use the Arc. In which case Voukoder tries to use them both as a team. Vegas, however, will always use the uhd750 for qsv rendering but will use the Arc for decoding if you select it in i/o prefs. Here's some render times I got from my fully graded multicam shoot:

With both Arc and uhd750 enabled, Arc selected for decoding, 6900xt for video processing:

With the Arc enabled and igpu disabled in bios, Arc selected for decoding, 6900xt for video processing:

Even curiouser... the Arc seems to be decoding the xavc 4:2:2 in hardware... didn't know it was supposed to do that. But it generated a bigger load on the gpu and slowed down the render while that camera was selected.

The Nvidia 4000 series launch revealed that NVDEC, the gpu decoder has not been updated, there is no 4:2:2 10bit decode. Have not read about NVENC, but may also be the same except for additional AV1 encode.

Looks like Nvidia's encode/decode support matrix is updated to include 4000-series.

No new decoding formats and still no 4:2:2. But Nvidia has already supported av1 decoding since the 3000-series and now AV1 is the only new 4000-series encoding format. Arc supports it too but have not benched it yet since Vegas cannot play it and the Voukoder-beta is the only thing I know of that can render qsv av1 at the moment. I saw 1 review, also using Voukoder, that reported 1.4x speed increase of Nvidia 4090 av1 encoding over the ffmpeg svt software encode.

Thanks for reporting your experience with this card. How does it perform as far as real time playback goes?

@Howard-Vigorita It looks like the 4000 series are using 2x NVENC chips. I think this is the first time in a consumer GPU except one of the 1080 or 1080ti releases allegedly had 2x NVENC's but I never saw any benchmark to show it could encode any faster. This will be different with the 4000 series, it seems they are doing this to match Intel's hyper encoding which also requires an modern Intel IGPU

I actually saw a little hyper going on between the arc and uhd750 doing qsv renders. There was mucho activity in each during renders which were slightly faster than the Arc alone. But Vegas decoding did not benefit so I opted to disable the igpu.

Thanks for reporting your experience with this card. How does it perform as far as real time playback goes?

@Hulk I prefer plugging my monitor into the 6900xt but I occasionally move it over to the arc for capture and it's not bad and looks pretty decent. It lacks all the pixel options, however.

The 6900XT has been a god send so far. But I do plan to build a second machine, so this is definitely something I'd consider.