Since one of the developers let it drop that there's a new hevc decoder in the works, I decided to get ready by doing a bunch of transcodes with Vegas 19 to use as a basis of comparison. My results so far are in a google sheet here:

I used a lossless hevc clip I shot with my a ZcamE2 as the source for all the transcodes and quality comparisons. I used the ffmetrics tool to take all the measurements listing all 3 of the metrics it reports. For consistency with vmaf measurements I've done in the past, I used the latest N4.4 release version of ffmpeg from BtbN to power ffmetrics. Since the decoder is the root of all quality, I ran a bunch of different encodes for analysis. Looking forward to repeating these with vp20 as soon as the new decoder gets here. In the meanwhile, some of the results I got unexpectedly go against common wisdom.

I believe the "new" encoder has been here a while... if you read the rest of the thread linked then it's evident the developer was talking about disabling the "Enable legacy HEVC decoding" in the File IO settings by default. So do that and enjoy the HEVC encoder in question.

The thread was about significant developments to the "new" HEVC decoder so it could become the default. I hope that happens soon as neither option today is great.

Quick read of these results suggests it's worse for quality than legacy HEVC and performance is similar.

Keep in might I've only done the tests with vp19 so far. So unless they updated the decoder some time ago, it's probably not reflected in these charts.

I'm mystified about the MainConcept performance too. I did notice a large amount of copy utilization in the Amd gpu and figure that might be speeding things up and lowering the quality.

@Howard-Vigorita are you able to upload that file, or re-link it if it's the same one you were using for testing a while ago?

It's the same one... linked at the bottom of my signature.

@Howard-Vigorita Your file breaks the Vegas GPU decoder like no other file I"ve seen when I play on timeline FULL/BEST. Do you see the same with your decoders with Vegas, when you compare with another NLE or a media player. Vegas looks to be using 40% of my rtx3080 doing nothing, looks to be a product of the broken GPU decoding. Throwing away 40% of the GPU processing power effectively downrating the GPU to a rtx3060 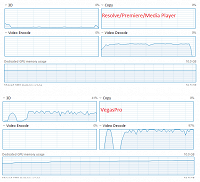 Ha, ha, I wouldn't try to play it without a proxy. I occasionally shoot zraw and it's the only lossless format output by the zcam converter that Vegas can decode. Which it actually handles pretty well. If you want to blow up Vegas and just about any other player, try feeding it near-lossless avc. I only use that clip to evaluate decoders and encoders.

It's a good file for the Vegas Staff to test their new decoder with.

This is what it did to my PC, It never really played more than 1 or 2 frames per minute (not fps) even tho it said 29.97 the image wasn't moving,

Adobe AE cached as quick as any other file & played flawlessly.

@Gid Same playback, usual problem, single thread GPU decoding, BUT, unlike most HEVC files Vegas uses multi-threaded decoding for encoding, In a way @Howard-Vigorita this is a bad file to be testing with as it doesn't represent the behavior of the usual HEVC file in Vegas with GPU decoding

The other unusual thing is how much CPU it's using for an NVENC encode. Resolve uses 13% CPU and encodes at 67fps, but Vegas uses 75% CPU for 42fps . I guess that means even if they just fix this GPU decoder to allow multithreaded GPU decoding on playback as long as the user has enough CPU this 30fps file would play smoothly

@todd-b You also need to look at quality when comparing Vegas to Resolve. I'm no Resolve expert but I could not find a data-element size setting in Resolve anything like Vegas' 8-bit integer and 32-bit float options... not sure it has one or what it is. I do know that the transcodes I tried with Resolve Studio using it's various codecs including Voukoder all come in significantly lower in quality than with Vegas.

I think the reason Resolve is so low in CPU is because it contains all frames and processing within the GPU Vram, which is very efficient but it means a lack of Vram is a very real problem, while Vegas , Premiere and most other NLE's don't do that, and the high bitrate of this file punishes CPU.

EDIT: I only just noticed Premiere does not support GPU decoding for this file, while Vegas and Resolve does.

@RogerS After update to Win11 22h2 and graphics driver updates from amd and intel, the MainConcept render and quality looks more sensible on the 11900k. I just re-ran everything and replaced the spreadsheet on google. Also dropped an Arc into my 9900k system and put in numbers for that. Looks to be a slight bit slower decoding than the uhd630 but qsv renders are somewhat higher in quality.