With VP15 and Intel Pre-DCH iGPU driver (6373 - before Nov 2018) VP15 used both the iGPU and the AMD RX580 for timeline editing. For example scrubbing in the pan/crop window was fast without any lag (4K) and I could watch the usage for the iGPU go up and down as I scrubbed. QSV and AMD renders were available in the list and were faster than software renders by a good margin and I could see usage go up for the GPU being used in the renders and in fact both GPUs would be used to some extent during the render.

DCH drivers for the 630 were released in Nov and QSV stopped working with VP15. I went back to the pre-dch driver for a couple months.

MS pushed out the new April windows and forced a driver update to 6374 (still pre-DCH) but VP15 crashes after a few seconds with that driver. The new windows (1903) blocks the install of the 6373 driver!

I read some forum threads of people using VP17 successfully with both the iGPU and an AMD video card so I upgraded to 17.

VP17 sees both the AMD and Intel GPUs. They are both in the list in preferences/video GPU acceleration. In preferences/General I have enabled QSV for encoding and decoding, Use GPU for ACES Color and Enable OpenCL/GL for Intel GPU and I have set GPU acceleration to AMD in the VIDEO settings.

With VP17 and the most recent iGPU and AMD video drivers and using task manager/performance to monitor the usage during editing (scrubbing 4k video in the pan/crop window for example) the iGPU usage never moves off 0% and the AMD stays in the 0-3% range and it lags. In addition I can select a render using QSV but again the iGPU usage never goes above 0% and the render takes the same time as using software only.

Why can't VP use the iGPU?

If anybody has this working do you have a monitor attached to the iGPU? I would do that but the iGPU cannot run my 4k monitor at 60Hz over HDMI but the AMD can.

Look in file i/o settings in preferences and see which device is being used to decode.

@john-rappl You might want to check and see if there are any chipset driver updates for your motherboard. The chipset drivers are the source of iGpu usage stats shown by Task Manager.

Intel QSV is selected in File i/o settings. I updated my chipset drivers and updated MB firmware, still the same issues. VP17 sees the Intel QSV but cannot use it! Handbrake does not even see the iGPU so it is not just VP thing, it's a setup or driver problem.

Does a monitor need to be attached to the iGPU to use it for encode/decode? I'll test it later today.

Again, this works with no monitor attached to the iGPU using VP15 and pre-DCH (6373) Intel Graphics drivers. Window 1903 will not allow me to install a pre-DCH driver - throws an error saying it is not compatible.

Pardon me if I'm mistaken, but aren't the chipset drivers and the GPU drivers for the intel chips separate?

Try changing the order you install the iGPU & PCIe GPU drivers... When I first installed my AMD Vega 64 I lost the Intel iGPU as a choice from within Vegas 15 & 16. I then re-installed the Intel (6373) drivers & both appeared within Vegas. This was pre-Windows 1903. I have not allowed my systems to update to 1903 but I think Windows only allows you to do this for so many months before you are forced to update... It's to the point where I don't even want my editing rigs connected to the Internet... When I have a smoothly working system I clone the drive & don't want Windows changing anything... If it does, then I go back to the cloned drive image...

Yes, the chipset and iGPU drivers are separate. I have both fully updated.

I plugged my main (only) monitor into the iGPU port and now it works and VP17 can also use the AMD GPU. Lag is gone during scrubbing in pan/crop and I see the iGPU usage moving up and down as expected.

What a poor decision to require a monitor to use the encode/decode of a graphics processor! Now I will need to place a second monitor on my system just to use the processor

Still doing testing and I don't like the jerkyness using this monitor at 30Hz!

Yes, for now it appears a monitor has to be plugged into the motherboard for the onboard iGPU to appear in Windows/Vegas. I have (2) 4K monitors connected to the Vega 64 & an old 1080p monitor connected to the iGPU...

I tried two monitors, one 1080p on the iGPU and my 4k on the RX 580. Vegas sees the iGPU and it uses it for QSV renders but not for timeline editing. In addition the QSV renders are slow compared to using just the iGPU on a single monitor!

I have just given up! I'm using just the iGPU with a single 4K monitor and now VP17 is using the gpu for timeline edits (scrubbing in Pan/Crop without any lag).

I'll have to get use to the 4k monitor at 30Hz. This all worked with both GPUs before the Intel DCH drivers!!!

@john-rappl If you got the HD 630 driver from Intel, that may be the problem... the chip is openCL ready but recent drivers from Intel don't have the api present. Get a copy of TechPowerUp gpu-z and take a look at what api's are there. If OpenCL is not checked, Vegas won't list it as a graphics board in Video Settings and won't use it anywhere. Should look like this: 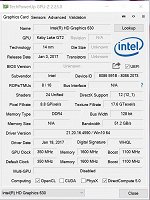 Usually motherboard makers supply the drivers for the Intel gpu with openCL enabled so you should get it from them and not Intel. Windows Update does have the last Intel-supplied driver with openCL but it's pretty old... I had to use that for my Intel NUC... it's here but I would only recommend it as a last resort:

There's a single inf file in there and it's the installer. No matter which route you go, use DDU (also available from TechPowerUp) to rip out your current Intel drivers first.

GPU-Z has openCL checked and if I have a monitor connected to the iGPU, VP17 sees it and will use it for renders but not for timeline editing but even the renders are slow - much slower than with the old drivers.

What I did was download the cab file from the windows update site then extract the contents to a directory, right-click on the inf file, and choose install. Takes a couple minutes before putting up a little box saying it was successful. After doing that I did a regular Windows Update and a new Intel driver got installed, but it did not remove the openCL api. But QSV dissapeared as a render choice so I rolled back that update and blocked it from future updates. All good again after the roll-back. I think the key to getting it to work right is using DDU first to clean out the old stuff. I didn't bother going into safe mode, btw, and it worked fine for me. Btw, timeline improvements only come when avc or hevc mp4's are on the timeline. QSV renders improve quite a bit, however.