I have a problem with my new computer. Well, I have a GeForce RTX 3060 card with the latest drivers installed. Windows 10. Vegas 19 can see my graphics card in video preferences, but not when selecting render. There is visible support only for the built-in INTEL graphics card. I attached a screenshot to illustrate the situation. Please help - what should I do to unlock NV encoder rendering? 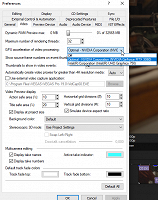 I would uncheck it.

What MagicAVC template did you use? Were you able to use MagicAVC with NVENC, VCE or QSV with this enabled?

I tried all combinations i could with MAGIX HEVC & AVC

All rendered normally, for this 1920x1080 clip @ 27-33secs, except MAGIX HEVC/AAC (INTEL QSV) Mainconcept HEVC), that turned on an encoder

Turning Allow legacy GPU rendering back on i get the same result double screen with that one above, doesn't matter tho, i never use HEVC, the others rendered at similar times to when it was unticked, I didn't notice any difference.

MAGIX AVC/AAC MP4 - Internet HD 2160p (NVENC) (or 1080p) default settings in the Customize tab, with Allow legacy GPU rendering ticked (on), that's my setting i use all the time.

If there's pics or text in the timeline i still use MAGIX AVC/AAC MP4 - Internet but not the one with (NVENC) at the end, the pics & text can get messed up. it's a little slower but more reliable, the render is as it is on the timeline,

& with Allow legacy GPU rendering unticked it rendered at 29secs.

@Adam-Wicher did you get it sorted out?

I think you are saying that QSV (Intel iGPU hardware encoding) worked once legacy encoding was off but gave visual glitches. Maybe try a different iGPU driver. Can't really tell if QSV rendering actually worked as there was no screenshot of the iGPU, just the NVIDIA one in task manager/ performance.

You were able to render to NVENC (NVIDIA hardware encoding) even with legacy encoding on, though there is no screenshot to show that from task manager/performance. Still issues with text corruption, I see. I thought the fix to dynamic ram preview in VP 19 should have addressed that. Before I had to set that to 0MB and turn off GPU acceleration in preferences/video to get NVENC renders to work properly (or just not bother and wait for MagicAVC with Mainconcept).

Legacy rendering should appear under SonyAVC and is CUDA or OpenCL, I believe. Never worked with it myself as my old cards weren't supported. If it doesn't bother NVENC encoding then no harm in leaving it on, thanks for testing.

Some info about it old rendering modes here: https://www.vegascreativesoftware.info/us/forum/faq-graphics-cards-gpu-acceleration-for-vegas-pro--104614/

Well, I have a GeForce RTX 3060 card with the latest drivers installed.

Which number exactly?
The latest are not always the best to use in an edit program.

Hi, my version of NVidia drivers:

Now i use studio edition but i tried with Game Ready drivers too. Unsuccessfully

The newest drivers should work- I haven't seen any issues reported with the latest Studio drivers- can you share a screenshot of help/driver update to confirm your version number?

If you uncheck legacy AVC in file io is it still missing? While these should not be linked, perhaps they are. Please hit "default" on file i/o, restart Vegas and see if that changes anything.

@RogerS. I hit "default" on file i/o, restart Vegas and no results

In preferences/deprecated features "allow legacy GPU rendering" is unchecked and I restore default.

So I'm still at the starting point. And do you think it might depend on the BIOS settings?

If you untick legacy AVC in file io is it still missing?

What happens if you untick both of these, do you get different options in Hardware Decoder to use?

472.47 Studio and game ready are the same driver- just stick to Studio as they come out less frequently with better testing.

Unchecking legacy AVC should at least bring back hardware decoding- does it also enable different render options (it shouldn't, but...) That should have been restored when you reset the program (you did that, right)?

I unticked both of these:

. After I RESET the program with ctrl+shift buttons and in render options I have the same situation:

Okay, so you reset the program and left enable legacy AVC decoding off yet Vegas can't find the NVIDIA graphics card for decoding or encoding (rendering) though it can find the Intel QSV one for HEVC.

Hmm... under preferences/video does it find the NVIDIA card now, or no?

Does the NVIDIA card function in other programs without issue? (if you go to task manager/performance you can see it doing something with an app that uses 3D or a benchmark)?

Before reinstalling Windows maybe try a support ticket to Magix. Scroll to the top here and click on support but don't go to ask the community. Search for your problem, say that didn't solve it and then create a ticket.

Is is very important for this function to delete the cached files for that program. Did you actually used that option by checking it? 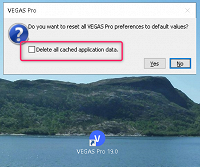 Does the NVIDIA card function in other programs without issue? (if you go to task manager/performance you can see it doing something with an app that uses 3D or a benchmark)?

I think so, checked by 3D

So, I'll  try a support ticket to Magix

Is is very important for this function to delete the cached files for that program. Did you actually used that option by checking it?

@Adam-Wicher It looks like VEGAS is not able to detect any hardware decoders on your system.

If no such folder is found, please follow the steps below to directly run So4HardwareDetectionOutput in a console window, and share the results of that command:

1. Open the CMD window (right click on Windows logo in bottom left corner, select "Run", and type in "cmd" in the dialog).

2. When the command console comes up, type in the following:

I did as you asked - in the 2 folders you are talking about - there were no files.

then I did the procedure in CMD. Results: 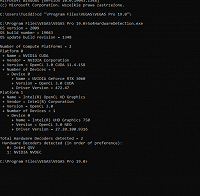 Thank you - the output from the command shows that hardware decoders (and encoders) are available, at least on your system.

So we now need to figure out:

1) Why the So4HardwareDetectiontOutput.xml file is missing from your  c:\Users\<USERNAME>\AppData\Local\MAGIX\FileIO\1.0 folder, and

2) Is there a way to fix this using some alternate ideas.

For Point #2, could you try running the following command from the command console (use same instructions as above to launch the command window):

Please replace <USERNAME> with your Windows user, as before. This should create a file in the right location; if you see any error on the command window, please let me know - there may be an issue with permissions or a Virus Checker, perhaps, preventing this from happening. If the file does get created, please launch VEGAS and see if your hardware choices are now available.

I did your indstructions, but I have command: The specified file could not be found

I hope I wrote all fraze well.

Please remove the "<" and ">" around your user name - all of "<USERNAME>" should be replaced with your Windows user name, so "C:\Users\Tutodz\AppData\Local\MAGIX\FileIO\1.0\So4HardwareDetectionOutput.xml", in your case (I apologize for not getting the accent characters right).

but without result in rendering options.

(also, once this file is created, you will need to restart VEGAS)

I restarted all computer. In File I/O i see:

That means VEGAS is not able to correctly read the contents of that file, for some reason.

Can you also share the contents of your "fileio_x64.log", located in c:\Users\Tutodz\AppData\Local\VEGAS Pro\19.0" folder. There should be a section towards the end of the file, called "== Start Hardware Decoders Auto-detection" - I am mostly interested in that, but the whole log should also do.