The biggest bottleneck of my system are the 6GB VRAM. The new Intel Arc A770 GPU offers 16GB for an IMO reasonable price. Would Vegas 20 support it out of the box?

I doubt vram is ever a bottleneck for Vegas or anything else except gaming. Vegas does use it for buffering but my sense is vram speed might be more important than amount... I get better Vegas performance with a 4gb VegaM with hbm2 vram compared to 6 & 8gb Nvidias.

I tested an a380 for decoding and qsv h264 & hevc rendering and Vegas likes it allot. See: this thread. Whether the a770 would be suitable as a main gpu is an open question. In my opinion, the a380 is not. I suspect both the a380 and the a770 have the same render and decoder chips in them so the one with the faster clock would probably be better. No one except Resolve Studio supports hyper-rendering yet, which I believe is only a thing if you have more than 1 arc in the same system. I just tested dual a380's with Vegas and Resolve. Vegas ignores the 2nd arc when rendering. However, Vegas does a littler qsv render-hypering if both an Intel uhd-750 igpu and an arc are present. But I disabled my igpu because Vegas favors it for legacy hevc decoding and it's quite a bit slower than the arc alone doing that. Voukoder plugins for Vegas and Resolve support rendering qsv avc, hevc, and av1 but only if you get v11.1 and set up Windows correctly. But not qsv-vp9. Vegas Magix only does qsv avc and hevc renders. Ffmpeg v5 is up in the air with qsv decoding but is dependent on Windows config just like Voukoder. Ffmpeg v4 works fine with Arc just like any Intel igpu.

Thanks for the detailed reply about the codecs!

Interesting that the VRAM amount is not a typical bottleneck. I get slowdowns and out of memory errors when I run a photo editor (RAW files) a video editor (10 bit 4K files) and a browser at the same time on an 6GB 2060. The Windows 11 performance manager shows me that dedicated GPU memory is full. So I thought that's what I need to upgrade first.

@jim-helpert You don't have enough Vram to do all that at the same time. Here's a situation where I've run out of GPU Vram, and it's swapping to system ram, which is very inefficient. Both the process of swapping out, but also System ram is much slower than Vram. As I recall Windows will use up to half your system ram for swapping out from Vram, which is why my gpu shared memory is 16GB (32GB system ram) 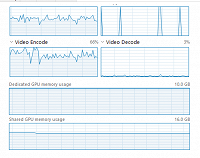 I didn't get a out of memory error here, but GPU performance was terrible, and that 3D activity didn't really correspond to what I was doing, I think it's a side effect of the Vram swapping. In a perfect world that shared GPU memory would be zero, but often it will show a small percentage of use

I doubt vram is ever a bottleneck for Vegas or anything else except gaming.

I've had VEGAS crash before because another plugin (neat video) was hogging up too much VRAM... VEGAS does need it, which is why they recommend 8GB of VRAM for 4k.

I've had VEGAS crash before because another plugin (neat video) was hogging up too much VRAM... VEGAS does need it, which is why they recommend 8GB of VRAM for 4k.

Thanks. I didn't know there was an official recommendation.