VEGAS Pro 15 Update 3 (build 311) has been released. Please give us your feedback in this thread.

If you already have build 261 or earlier installed, there is no need to uninstall it. The build 311 will overwrite your installation and retain your settings. Your computer will need to be online for activation after the update.

If you are installing VEGAS Pro 15 for the first time, it is generally better to install using a VEGAS Pro download manager. See here for details & links.

Some of you might wondering: "Why hasn't issue X or Y being taken care of?". Most of the time the answer can be broken down to a combination of priority, ressources and time. If you are interested in a more detailled answer, please, have a look at Gary Rebholz's post history. He is constantly explaining which challenges we are facing from day to day.

I do not think installing the pack was a good idea. And I do not know an easy way to uninstall everything that was installed without re-installing system. However, my knowledge about the pack is outdated, may be newer versions are better in this way. I'd recommend to rid it off.

In addition, I believe it would be a good idea if you put everything about your issue in a separate thread. With more details. Claims like "I have newest drivers" not really useful. It's better to provide version numbers (at least for chipset and graphics card). Probably you already done this in other threads and cannot do this again and again. So this is why I recommend you to have a separate thread with everything included there.

If you can reinstall (temporary on a separate SSD/HDD) the system once again I'd do this:

- Let it auto update everything

- Install Vegas only (no plugins, codecs packs etc) and test

In addition, I'd recommend you to check your hardware and temporary replace memory and graphics card. I do have experience that some memory modules caused OS/programs crashes (only few programs crashed, have not used Vegas on that PC). I was not able not detect the defective module with memory testing programs (windows diagnostics, memtest86+), but replacing these modules fixed the issues. Also, I had very similar issue with graphics card. The Skyrim crashed almost instantly with the card installed, but other games and testing programs -- does not. Checked this on two different PCs with different drivers. Replacing the card fixed the issue as well.

I already comment that I will provide all of this infromation directly to MAGIX team :). On top of that. I have done your way like three times already. Really. Please, I know you are trying to be helpful, but please, read whole thread before posting something like this. I tried your recommended things in our studio with 15 different computers. With different driver sets and even Windows versions.

I'm trying to render a 15 minute project, but it won't render. The "elapsed time" continues to run, even after the "approximate time left" is all zeros. When I go to the file location, there is a file that only plays about 20% of the project. Suggestions?

@bilco64 Troubleshoot with this thread: https://www.vegascreativesoftware.info/us/forum/faq-how-can-i-stop-vegas-pro-hanging-or-crashing-during-rendering--104786/

VP15_311 keeps crashing when 'Selectively Prerendering Video', especially when Intel630 is selected as primary GPU acceleration for video processing. Not so bad with Nvidia 1060. however,

I have made a rendering comparison chart (link google drive https://docs.google.com/spreadsheets/d/15vMiZ3kfM48QZE1avQU-zRLz2TL2KdsTha11godsscs/edit?usp=sharing ) that shows the different renderers (XAVC-S, Magix AVC +/- QSV, Magix HEVC) and how they perform under different circumstances and how their actual load looks.

I tried your recommended things in our studio with 15 different computers. With different driver sets and even Windows versions.

15 different Computers? Great! I must be a lucky guy that it works here with my one 8core editing System, running at 4.2 GHz equiped with an Quadro K4200 und an AMD R9 390X (set to GPU acceleration). Right, two different GPUs are tricky in Terms of Drivers - but it works.

I have made a rendering comparison chart (link google drive https://docs.google.com/spreadsheets/d/15vMiZ3kfM48QZE1avQU-zRLz2TL2KdsTha11godsscs/edit?usp=sharing ) that shows the different renderers (XAVC-S, Magix AVC +/- QSV, Magix HEVC) and how they perform under different circumstances and how their actual load looks.

That is a great comparison Chart. Have you run the Tests with b311? If I find the time I will try to post some compareable figures. The 32bit mode was set to Video Levels?

the unfortunate truth is, that with VP15 I was expecting the buzzword 'improved hardware acceleration', which now since I have powerful hardware, proves a myth. Crashes aside, I cannot see efficient use of computing power, especially high end GPUs. And I don't know where the issues are to use the systems more effectively. By now, I would have expected the software to give it 100% load to the GPU when it can, and it's far from that. For my new system, I was expecting a theoretical 4x realtime render speed, even in 32bit floating point... And now you check those charts...But, I can't see the bottlenecks, I don't think its the hardware...

Well, for the use of Vegas Pro 15 b311  together with Filmconvert I see here up to 60-70% utilization of my two GPUs together (R9 390X, Quadro K4200) during playback, while CPU utilisation stays low. What delivers a appropriate playback during editing for my UHD 25p/50p footage, what is more important then the rendering to my opinion.

Not so bad I think. Grading with my v log or s log footage to rec 709 works nice with such a combination.

[XAVC-S Timecode issue] - For the record:

(can someone else please confirm) Beware Sony multicam crew ;-)

I have to remember to disable this every time I need to use the Timecode for syncing. Was hoping it would be fixed in this update, but must be low in priority.

Not sure what's going on, but each successive release of Vegas Pro 15 has gone downhill for me. Black video on the timeline (Sony AVCHD), audio anamolies, slow interaction with effects. I cannot exit out of Vegas without it returning a crash menu which means I can't even get a preference changed that requires restarting the app. I'm back to the initial release ver. of 15 just to get a modicum of stability. I've never had this many issues since v. 3.

I'm having definite speed improvements, but at the cost of stability. I can edit smoother than ever before, but if I minimize Vegas, I run the chance of it crashing when I return. If I delete an item off of the timeline, there's a chance that it will cause Vegas to hang. These bugs are not easily repeatable, unfortunately, so I haven't been able to catch one in the act, though the last time it crashed (after minimizing) it did give me a bug report screen to submit. I did, along with a description of what happened.

any of this work better shutting off ALL GPU processes?

Render works for me with GPU off, but edit slow down is same.

My editing is pretty quick (though I do occasionally notice that slowdown the above poster mentions, I fix it by pausing, waiting a second, sometimes changing quality settings for the preview, it usually clears up after messing with it a bit), but trying to render with the GPU (970 GTX) so far hasn't worked. No frames render, it just sits there counting away. Second attempt got about 100 frames rendered then stopped. I have not disable so4compoundplug.dll's AVC reader, hoping it had been fixed by now. It seems to bring with it lots of speed improvements, but also makes things crash a lot. The media on my timeline is a combination of 4K 10 bit footage from a GH5, 4K 8 bit footage from a GH4, 1080p footage from a GH2, and 1080p footage from an HMC40.

Edit: My renders are locking up no matter whether I'm using NVENC or not. Looks like I have to go back to disabling so4 again...

I have updated the chart to include Realtime Playback performance comparing GPU acceleration and resulting frame rates.

Surprisingly (as indicated above) the best performance is gained by having GPU acceleration: OFF, for GPU enabled OpenCL plugins, as this will use little CPU with good resulting frame rates (no lip sync loss) (yes, this sounds weired)

@Wolfgang S. can you use Task Manager / Performance to individually analyze your GPU performance? are you editing in a 32-bit floating point XAVC-S FHD project? your Filmconvert, what renderer is it set to use?

PS: have now included my system specs in my personal info ;-)

@Dr Zen, just so you don't think I'm dreaming, here's a screenshot from my files (originals have been shot with a Sony A6300, and imported into the previous VP15 release version) 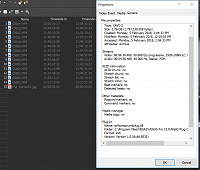 VP15_311 keeps crashing when 'Selectively Prerendering Video', especially when Intel630 is selected as primary GPU acceleration for video processing. Not so bad with Nvidia 1060. however, (...)

This is in my desktop computer, running VP15 with the 630 as main GPU accleleration, and Filmconvert using GPU (OpenCL), realtime playback 32bit 1080: 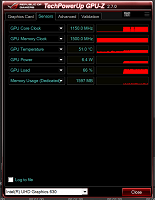 Final test: If you now import a new/different XAVC-S video into the same saved project, with So4 still enabled, all new videos added do not show any Time Code In/Out.

All my XAVC-S videos are coming from a Sony a7s.
Here is a screen shot showing XAVC-S video imported into VP15 #311, with So4 plugin enabled. 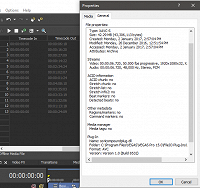 bad timeline preview and crashes.. this is hopeless

Hello, I installed bulid 311 I opened vegas 15 and let go rederation of your project which is showcase and stopped at 71%. Each version of your version is fraught with error. I am sorry to say, but I think I will finish my cooperation on vegas 13. I was planning to buy a vegas 15 at the trade show for 1.5 months, but it still hangs during rendering. My computer is 10 64bit. Ryzen 1700X, Ram 16GB, asus 1050TI OC

What is the test version like you can not test the entire project? A limitation of up to two minutes only shows that you are going to sell to the market and are afraid of financial losses. The logo is a sufficient security on the project. Nobody will give the client a project with your logo. I do projects for 3.5 hours and I would like to be able to render the whole to be compared to vegas 13.

so maybe people should not install this update?

Hello, I installed bulid 311 I opened vegas 15 and let go rederation of your project which is showcase and stopped at 71%. Each version of your version is fraught with error. I am sorry to say, but I think I will finish my cooperation on vegas 13. I was planning to buy a vegas 15 at the trade show for 1.5 months, but it still hangs during rendering. My computer is 10 64bit. Ryzen 1700X, Ram 16GB, asus 1050TI OC

Same here, I am following the development of Vegas with interest. I am still using Sony Vegas 13, now even with 4K, which is still working pretty well for me since I am only using Sony cameras. Once I tried Vegas 14 which genearated glitches in AVCHD clips. Interested in acquiring the latest version of Vegas because of some new features, but....

Just updated last night - thanks for the so4comp issue with shadowplay dual audio stream being fixed, the audio now properly shows (game audio and mic in their separate tracks).