Both VEGAS Pro 18 and VEGAS POST Suite have been released. Please give us your feedback in this thread.

For more information, please refer to our official announcement.

Before you post... if you have an issue with VEGAS 18 not working properly, DO NOT post it here, as it will just get buried under a ton of other posts and never addressed. If you want help faster, make a new thread about your issue, that way we can keep track of it easier and help you easier. Let's keep this to opinions about the new software, requests for new features, etc...

Just tested out VEGAS Pro 18. I see few things that is no longer in VP18. I really hope VEGAS Team can bring this thing back, otherwise the workflow would be cumbersome in my opinion.

First of all the docking panel that hold Video FX/Transitions/Media Generators etc etc are now fully redesign giving it a new fresh look. Which is great, but the only major drawback is that I cant press a certain letter on my keyboard to search for that particular FX. For an example, I want to add Glow FX to my video. I can just go to video FX tab, click any FX in the library and just spam "G" on my keyboard till it show up & highlight Glow FX. Same thing if I want to add color corrector, just press "C" on my keyboard multiple time till it highlight that FX. Some people would just prefer to search for it or scroll to look for that FX, I still think having an option to just press something on the keyboard till it highlight that FX would be much more faster.

Beziere Mask in VP18 no longer have its own Motion Tracker.
I don't know why VEGAS decided to remove it. In VP17, I can mask out the subject with custom shapes using the pen tools and motion track it with the Beziere Mask FX. I often do this when I color Grading the video.
From the grading panel, I can simply add the beziere mask with a click of a button, do some masking, motion track it and done. I can then add any FX and only affect that tracked masked area (Off course I will need to duplicate the video first, and add any FX cuz the Beziere Mask cut out and make a hole onto the video). See? Very fast & intuitive. Got that Davinci Vibe on it & sooo logical type of workflow. Off course, Its not a perfect Beziere Mask FX but removing the tracker from it will make it more cumbersome.

The AI Colorization is cool, it work just fine. But I dont found myself using it alot. But with AI technology, its a step for VEGAS Team to do more then just recoloring Black & white video. Maybe auto rotoscoping stuff like that can be implemented in the future.

The Exposure control in the Grading Panel is great. It does control the exposure like a real camera. Good job. I like it. Kudos to the team!

Here I've made sample UI design for the current Grading Panel. Just a suggestion, calm down. Just an enhancement what I think it should be.

-Playhead (To scrub through the media you're currently grading)
-Color FX (Just like how we click beziere mask, but it add color FX instead from the Video FX tab, restricted to only color)
-Split Screen Mode (You can pick any footage in timeline for side by side reference. The Scopes reflects base on which preview u clicked, highlighted with that blue border)
-Beziere Mask Improvement *Skip FX (lol idk what to name it) (Off course, have its own motion tracker. But this time you can decide to not affect certain FX in the FX chain. For an example, the mask wont affect & mask out the color grading FX. It will automatically update and show all of the FX when u add more FX to the video FX chain)

Some good suggestions. I personally do like the new motion tracking method, because I can track once, and that same tracking data can be send to bezier masking, as well as flicker reduction to reduce motion blur, lens flare, or any other effect that has a "position" capability that can be moved around. So, if you have more than one thing that needs motion tracking, it actually dramatically speeds things up, and it doesn't require scripts to make it work, which felt sloppy in 17.

Trying to find find maximum 360 video rendering specs for V18. Beyond 4K yet? Any clues?

What I'm sorry about ....
- AI plugins Colorize and Stylize don't work for me. Reported to team.
- If I have third-party plugins in a project, some projects will not load. Vegas collapses. Reported to the team.
- I'm very sad that there is no GPU support for MXF (AVC long). This 4k 60Mbs format is a hard nut for Vegas.
- deleting events at runtime with Auto Ripple enabled has not been fixed yet. Vegas freezes for two minutes. And if someone says everything is ok, they're not right.
- and perhaps most sadly, I have been waiting for 5 years for the opportunity to mark events with the right mouse button as in Cockos Reaper. I recommend the guys on the team to install Reaper, work in it for a while and then move to Vegas. You'll start missing that feature in Vegas.

Overall, I miss similar minor improvements that will speed up the work.
More logical results with Close Gaps, Time Stretch 0-100% Velocity for audio. Mirroring for PIP, SRT and SUB export and more. There are almost none in this version.

What pleased me ......
- Improved GPU support for DJI AVC and XiaoYi AVC, which have been blacklisted for a long time. Now they play as well as when I turned off the blacklist before. Maybe the team did the same. They don't mention it anywhere.
- Event Handles function. By the way, this could be improved even without making the blue handles visible. Just extend the attachment area. But still thank you. By the way, if you add a new feature, it should be visible and active from the beginning. If I didn't see the tutorial with Gery, I wouldn't know about it at all.
- Simplified Motion Tracking. Although compared to Vegasaur it still has large reserves.

Obviously I have a different idea of ​​what Vegas should be like. Nevertheless, I remain a loyal fan even though I suffer quietly.

here you can compare user requests with reality.

By the way .... Now you can't access the internal settings. Probably a different keyboard shortcut. 😺

I'd like to try the demo but when I click Start Trial it says it will email me an activation code but I've not received anything. I've tried various support options including Twitter & facebook and even in desperation the youtube event but so far no progress. Despite I feel it's a bit much to pay after the last upgrade was just 3 months ago (waste of money on my part) if I did decide to upgrade this doesn't bode well for any smooth activation of the bought product, I think the software pirates are more efficient!

Audio is something the team has long wanted to overhaul, but has not had the opportunity to do yet because there were some very important video features that needed to get some love first, in order to prepare VEGAS for the future. They have told me that audio is high up on the list of things to do from here on out, though, so moving forward hopefully we'll see some things like 64 bit VST3 support (which will enable me to import my Reason rack directly into VEGAS, turning VEGAS into a powerful music creation tool on top of amazing video editing and effects).

Audio is something the team has long wanted to overhaul, but has not had the opportunity to do yet because there were some very important video features that needed to get some love first, in order to prepare VEGAS for the future. They have told me that audio is high up on the list of things to do from here on out, though, so moving forward hopefully we'll see some things like 64 bit VST3 support (which will enable me to import my Reason rack directly into VEGAS, turning VEGAS into a powerful music creation tool on top of amazing video editing and effects).

Haven’t had much time today to check out the new bits, just two items. I tested out the render times for the benchmarking project, was much slower in vp17 than my original test times using vp16. Good news now is that the fhd and uhd times are both faster by 4/5 seconds than my vp16 times, nice indeed. Tested the gpu driver update feature, great, saved having to log into Nvidia app, nice addition also.

Awesome! Can't wait until we can get some nice benchmarks for 18 across multiple systems! 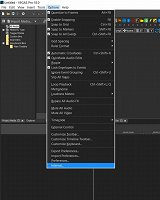 Btw Audio in VP18 pro : You can open your Audio with "Edit in Soundforge Pro" and e.g. VST3 is possible: Wondering about "Open in S..." compared to "Open Copy in S...", is it destructive? In my first experiments it changes the properties (name) of the event in the timeline, converting .mp3 to wav, but the original file was not altered.

Oh, thx for clarification. If I always put the sound files into the Project media Pool as copies instead of the original files, then destructive handling won't matter. (Mainly because I still have little knowledge of Soundforge).

First of all, great applaus to the Vegas team for the work you did on the new release! Very happy to see it all pull off. I spotted a small thing in the new color grading panel when working in HDR. It seems that when you slide the "Exposure" slider, the output will be limited to 100 nits. I don't now if I need to drop this at Support.

When u open copy in audio editor do u have to export it from the audio program u used back in to Vegas.

When u open copy in audio editor do u have to export it from the audio program u used back in to Vegas.

Not if you save it from the audio editor back to the same location and with the same name. VEGAS is just pointing to that file. As long as you keep the filepath and name the same as what VEGAS expects, it'll update automatically.

On my part also a big compliment to Gary and his whole team.
I think with this version - despite Corona - a big hit was made.
I am personally most pleased about the (practically free) integration of Sound Forge. Thanks for that.
Since I have a big project going on, I will only start after update 1, ;-))) and in the meantime read carefully here.

@gary-rebholz in your video of last Monday (introduction) you mentioned that Vegas Hub and Vegas prepare is going to be introduced for free in the future for all versions, but looking at the vegas software comparison matrix, the vegas pro 18 edit version will not have any of those, and only the 365 wil have the vegas hub.

Is this correct, or is this just a 'X' or 'V' typo oversite on the matrix?

First of all, great applaus to the Vegas team for the work you did on the new release! Very happy to see it all pull off. I spotted a small thing in the new color grading panel when working in HDR. It seems that when you slide the "Exposure" slider, the output will be limited to 100 nits. I don't now if I need to drop this at Support.

I also spotted this bug and reported it to the team, they'll have it fixed soon. It also applies to non-HDR 32 bit projects.