Other stuff of import:

Estimated usage: not a professional editor who works every day so I won't be maxing out the system except on major test renders, but my visual style tends to be somewhat fx intensive and Particleillusion definitely can be depending on emitter complexity.

That said I have a third party particles program that could take several hours to render. I may or may not look into consumer ray-tracing/3D landscaping programs like Terragen or Vue. Though the latter would probably require render farms, which I can't afford.

I've never had an air cooler fail on me on all my previous, granted far less powerful systems going back to the late 1990s. The Ryzen 9 5950X states a liquid CPU cooler "recommended."

Since I'm totally new to those, I've been Googlin' around, watching decent pros-cons of both types of coolers on YouTube this is my current - probably not informed-enough - perspective:

Custom, non-AIO is not something I want to attempt or afford. As to AIO, understand the better-cooling advantages of liquid coolers, but I don't like the possibility of an AIO's pump going out. May be rare but seems to be that the consequences would be drastic and fast, or not.

I like the idea of a liquid cooler being able to act as a exhaust case fan (such as 2x 140mm or larger), but not necessary for my set up is pretty chilly as is.

Familiarity is a strong decision factor. Due to the power of the Ryzen 9 CPU, I'll need a chunky dual-fans model. May or may not interfere with the motherboard's RAM or other parts of the layout. I'm still looking at what models are out there in the sub to USD $100 range.

Current P.O.V.: I'd feel better with an air cooler overall and the TDP rating of most coolers are way over the Ryzen's 105W - at least 200W, so safe.

But I welcome some wisdom on all this for as stated, I'm new to the whole liquid versions.
Thanks.

You can look at my system in signature, but basically I have a Ryzen 9 3900X and cool it with this Noctua NH-D15, I had to replace the first fan to a 100mm because the 140mm would interfere with the RAM. 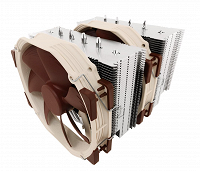 I sometimes render using Voukoder x265 and all cores of the CPU goes to 100.0% for hours and never had any throttle back, the clock even keeping at 4.10GHz over the stock 3.80GHz. I prefer the simplicity of the air cooler to the mess of liquid.

That CPU appears to have a max wattage of under 150 watts so use whatever cooler you prefer. Ensure the case has good airflow and adequate room for your fans.

I have a dual fan Fuma2 Scythe cooler that works well and didn't have ram clearance issues (Intel MB though).

Thanks for all of your replies. I still think I'm going to stick to air cooling - I just have to choose a solid one. Noctua seems to be that as one or two other brands are.

What I do when researching stuff is create a folder and start tossing bookmarks into it as I crawl the Net.

In this case for coolers -- and am not yet totally decided on mobo for I discovered that X570s have to m.2 slots vs.1 on B550s. My OS is already on a Samsung Nvme, a second may come in handy for video projects and rendering - they sit on SATA 6 right now. Such probably wouldn't make that much of a read/write difference, but any improvement is a plus.

At some point I have so many bookmarks I have to finally make up my mind and make a decision.

At full load I do not see any significant difference in maximum temperature or experience system shutdowns.

I would recommend: stay with air cooling

On my 9900k I have a Noctua NH-D15 as pictured above but with a 3rd fan clipped onto the front and it's barely adequate and not quite able to maintain the full spec clockrate under load. Most overclockers recommended a dual-radiator aio for that cpu. On my 11900k I went with an aio single-radiator in the same spot as the usual case-fan and it's fine for maintaining the clock-rate at full spec under load with no overclocking. Not sure how to compare the tdp specs between Intel and AMD. AMD specifies a default of 105 but I think that's probably higher than the draw of the 9900k that also had a single spec for a tdp of 95. The 11900k on the other hand specifies a drop-down mode to 95 and a max of 125 which is probably a higher draw than the 5950x.

@Howard-Vigorita - Thanks. The only thing I "overclock" is XMP my RAM in BIOS. Never overclocked a CPU or GPU and probably never will for I'd rather go with the dictum of "If ain't broke, why fix it". My new GPU almost cost as much as my new CPU, no point messin' with either. Waiting a wee bit more for a render is better than having my system scream, implode and/or catch fire :D

As far as air coolers, it's down to Noctua NH-D15 chromemax.black vs. Be Quiet! Dark Rocke Pro 4. Tomato, tomato, really, since they benchmark very similar though the BQ! is USD $20 cheaper.

There are a lot of great air coolers out there. Dark Rock Pro 4, DeepCool Assassin III, Deep Cool AK620 and of course, the Noctua. I personally don't like the color of the fans on the Noctua, so would get it in black.

Agree on color scheme of original Noctua - brown-beige (whud?) :) I went for the BQ! Dark Rock for I already use BQ! case fans and am very satisfied with them. They are... quiet.

The Be Quiet Dark Rock 4 will be just fine! The Pro is you want something "bigger".