Make sure your Project Properties match the your media properties. By default, when you first drop media on the timeline you will get a prompt like this:

In most cases you should answer "Yes". I also checked the box so that I am not asked again. If you want to change this setting later, it's in "Options" > "Preferences" > "General" tab:

To manually adjust the project properties, click the button at the top right of the "Project Properties" window and choose a typical media file that you wish to match. Note also the "Best" setting for "Full-resolution rendering quality", which I always set.

VEGAS assists you by highlighting render formats that are a match for both your frame rate and your resolution with a "=" sign: 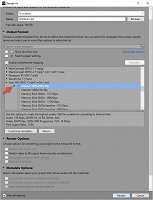 If your project and render properties both match your frame rate and you are working with full-speed footage only, this should not be necessary. In other cases it can improve the sharpness of the rendered video.

A guide to disabling resampling in VEGAS Pro is here.

Note that in some cases such as slow motion the result might look worse if you disable resample. Chienworks explains the options here.

Disabling resampling can also improve the preview playback smoothness of your timeline.

VEGAS' GPU acceleration is often responsible for all sorts of weird problems with the appearance of video. Try turning it off in "Preferences" > "Video" > "GPU acceleration of video processing". You will need to restart VEGAS afterwards:

If you are rendering with the MAGIX AVC/AAC encoder (VEGAS Pro 15 and later), try turning GPU acceleration off in "Render As" > "MAGIX AVC/AAC MP4" > "Customize Template" > "Encode mode". Set it to "Mainconcept AVC", which uses CPU only:

If you are rendering with the Sony AVC/MVC encoder, try turning GPU acceleration off in "Render As" > "Sony AVC/MVC" > "Customize Template" > "Encode mode":

If you are rendering HEVC then try using the Intel HEVC encoder instead of the AMD-or-NVIDIA-only MAGIX HEVC encoder, and try disabling QSV hardware acceleration in "Render As" > "Sony AVC/MVC" > "Customize Template" > "Encode mode". Note that it will be SLOW:

If the rendered video is blurry or showing pixellation, blockiness etc., you may need to increase the bit rate when you render. For many formats the bit rate can be adusted by clicking "Customize Template" in the "Render As" window. Alternatively you may be able to select a higher quality template. See this post for improving the quality of AVC (H.264) renders.

7. IS THE CONTRAST WRONG?

If the rendered video has more (or less) contrast than you were expecting, read this post.

8. ARE YOU MONITORING CORRECTLY?

If you are putting your rendered video back into VEGAS to judge it's quality, it may be that you are simply using a low preview quality such as "Draft (Auto)". Try a higher quality such as "Best (Full)".

9. IF YOU NEED FURTHER HELP

The following information will help forum members to diagnose your issue and help solve it. Please start a new post.

You can also submit a support request, including as much detailed information about the problem as you can.