Although VEGAS will open and play many media formats with its native decoders, other types of media cause issues such as:

If your video opens in VEGAS but appears corrupt, first try disabling GPU acceleration. See #4 in this post.

If your video is simply "stuttery" when you play it in VEGAS (i.e. It does not play smoothly), but otherwise looks OK, it should render correctly. See here for tips on smooth playback in VEGAS.

Use MediaInfo to help identify the properties of your media and how it was encoded.

Vegas was originally designed to work with camera footage. Many game capture and screen recording programs generate video that does not decode smoothly in VEGAS. Some of them use non-standard codecs or file containers. Amongst those programs known to cause problems in VEGAS have been:

If the program can record using different codecs then try them. H.264 (AVC)/AAC in an MP4 container is a good place to start, if the program supports it. Various VFW (.avi) codecs will work OK if you install the appropriate codec (see below).

Alternatively, OBS Studio is a free, open-source screen-recording application that records video using the x264 codec. It's recommended to update older versions of OBS to the latest OBS Studio. See this FAQ post for advice on settings that work well with VEGAS Pro.

These formats have been known to decode incorrectly, slowly, or not at all in recent versions of VEGAS:

Quicktime files have the file extension ".MOV". VEGAS Pro 14 and later versions read ProRes formats natively, and some other .MOV files containing H.264 (AVC) video will also be read natively by VEGAS. In addition, VEGAS Pro 15 reads iPhone and iPad formats natively. However many Quicktime formats still require Quicktime for Windows to be installed. It is no longer installed automatically with VEGAS.

In VEGAS Pro 17 and later, you need to enable the Quicktime plugin in Options > Preferences > Deprecated Features.

The free Cineform VFW (.avi) and Quicktime (.mov) codecs are installed with GoPro Studio which is now part of GoPro Quik Studio.

Here are some other common video codecs that you might require to play your footage:

Videohelp.com is usually a reliable and up-to-date source for codecs.

VEGAS PRO 15 has a new decoder for XAVC-S files and some AVC files. This codec may cause issues such as 2 x stereo tracks decoding as 4 x mono tracks, small audio sync discrepancies, poor performance, or hanging. If your footage is opened by this "so4compoundplug" decoder then you can try disabling it. See this post for more information. If that doesn't help then re-enable it for wider format support.

This workaround may be particularly effective if your MP4 file was created by a different application or device and is missing its audio stream in VEGAS. It has also been known to help with NVIDIA ShadowPlay files that do not open correctly. 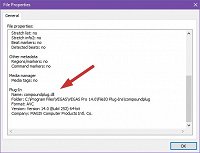 You can trick VEGAS into using the alternative mcmp4plug2.dll codec instead, which might give better results, by renaming the compoundplug folder, found here:

Close VEGAS, rename the folder to something like compoundplugRENAMED, then restart VEGAS and try opening your file. If it opens more successfully, I recommend rendering it to a new file with VEGAS, for example using the Sony AVC/MVC or MainConcept AVC/AAC renderers. Then close VEGAS, restore compoundplug to its original name, restart VEGAS and use the new file. Do not just leave compoundplug renamed, as it will affect playback and compatibility of many other files.

The ImportAssist script within Happy Otter Scripts can be used to process many types of troublesome footage so that VEGAS can open it properly. The least lossy method is to re-wrap footage to a new container, but it can also be used to transcode to another format, convert variable frame rate to constant frame rate, trim frames etc.. Discussion thread on this forum is here.

If you need to convert (transcode) your file so VEGAS can read it properly, you can also try these:

The MKV container is not supported at all in VEGAS. Instead of converting the video by re-encoding, try re-wrapping to an MP4 container. You can use MP4Box, Avidemux, an FFmpeg GUI, or the following FFmpeg command line:

ffdshow is a DirectShow and Video for Windows (.avi) codec with support for a wide range of audio and video formats. If you cannot find an individual codec for your media, and you prefer not to convert the media, you could try installing the 64-bit version of ffdshow from here. Although some users use ffdshow for "everything", for VEGAS it's recommended to only enable the particular decoder you need. It's highly recommended to take an image backup of your system drive before installing this, or at least to set a Windows system restore point. If ffdshow doesn't help, uninstall it.

Codec packs can cause major problems with Windows and video software and can be difficult to completely remove. They should be avoided if possible. It's usually better to try installing the individual codec required if you can find it. As a last resort you could try installing a K-Lite Codec Pack. Again, it's highly recommended to take an image backup of your system drive before installing this, or at least to set a Windows system restore point. If the codec pack doesn't help, uninstall it.

If you can't open some files that were recorded to SD card, you may be able to recover them. For Panasonic (and maybe Canon) cameras, try AVCCAM Restorer. For Sony cameras, try Memory Card File Rescue. Piriform Recuva can recover deleted files.

14. IF YOU NEED FURTHER HELP

I've only just come across this excellent post. Thank you.

I would stress what you say about the problems that can arise if you install a codec pack.Over the years so many people have reported problems, sometimes desperate ones, after installing such a pack with the K-Lite pack you mention proving to be the source of many difficulties for numerous users. My advice is to avoid installing this if at all possible and I would underline what you say in that, once installed, it can be extraordinarly difficult to get rid of them completely. Be on your guard!

Fraps is defunct I believe and not being developed anymore. Xsplit, OBS, or FFMPEG would be the free go to capture, I would recommend for Vegas editing.

Action is good for their support of GPU hardware encoders like NVENC, AMD VCE and intellisync.

Rewrap iphone material the same way to .MP4 from mov. Also re-wrap .MTS(AC-3) camera footage to .MP4 or .MXF converting the MP3(AC-3) to PCM uncompressed WAV. This will stabilize issues I have seen with Vegas.

Thanks for the feedback and useful tips.

OBS Studio does not. It encodes constant frame rate video that plays nicely in Vegas.

Rewrap iphone material the same way to .MP4 from mov...

Good morning,
It has been about 4 hours today just trying to resolve the Codec problem with Vegas pro 14 that does not want to open any video.
Online I found 100 tutorials how to fix it, all of them differents so I just making confusion, I tried some of them without success.
At the end I tried with quicktime player and worked only partially, so I still have many many videos that vegas pro does not accept.
Could you please give me one official way to fix this problem with Vegas pro 14 and avoid installing different codec programs that at the end do not work and just make a mess in my hard disk!? Can you link me the solution or describe how to proceed?
Thanks a lot, I'll put my laptop to the initial restore point and I wait for your answer

What codecs are you using? What format is the video in?

Thanks for the answer!!! I try open some AVI and MOV but vegas pro 14 does not want them. I just disintalled the codecs pack I put before, all of them. I just would like to know if there is some official way to do it properly. Magix does not give any concrete and vailable way?

both AVI and MOV are container formats that can contain video encoded with a variety of codecs, so it's hard to know exactly what the codec you need is without finding out what those formats are. Some formats are so specialized that there is little hope of vegas opening them natively. For instance, the video projection mapping software I use, Resolume, has its own codec called DXV that is contained in a MOV format. It's unlikely that Vegas will ever be able to natively open that format, since it's only used with that one program. Someone else here may be able to offer an easy way to determine what the codecs of those files are, I don't have the answer off the top of my head, unfortunately. I'd have to dig and don't have time at the moment.

Can you link me the solution or describe how to proceed?

Frosty and Nick Hope, thanks a lot to spend your time to help!
Anyway, I tried to restore windows to one point before installing the codecs pack without success but with my uninstaller programs seems there is nothing of them left.
So seems all it is right. I'm a beginner, so I still have a lot to learn. I followed your suggestions and I installed Handbrake program and the problem is resolved for the moment, because the resolution after converting in mp4 is still perfect!
Could I just ask any suggestion for one program that download videos from youtube avoiding resolution lost? Of course they'll be copyright free.
Thanks a lot

Clipgrab is my go to downloader and, to the eye at least, seems to have little if any quality loss.