Some of you may be aware of this. We've been talking on other forums forever but only a few people need this plugin to do this specific task so only a few know that it doesn't work the way it used to do (until version 10) when you crop an area in a non-standard shape (for instance a square in a 16:9 video).

I'll try to make it short:

- Import a video or a photo into the timeline;

- Crop the video as a square;

- Apply the border plugin to this media;

- And here's what doesn't work. Until Vegas 10 (included) the border was following the square shape perfectly. Since Vegas 11 (and now even with the latest Vegas 15!), the border doesn't apply to the selected area but to the full rectangle.

Here's everything in pictures:

And if you want to try it out yourself, here's the project:

There's no workaround and it should NOT be a workaround. It should work the way it worked until version 10 (with no tricks, just working!) because there's people using it as an important part of the job.

I contacted Magix more than once. First they didn't reply. After a while they said "try this workaround" but nothing, it doesn't work and then they said that it's fine and that it works...YES, SURE.

It's a shame because for this little, tiny plugin, I'm still stuck at Vegas Pro 10. But I can't move one, because that little plugin is essential with the work that I do. Not a huge deal because Vegas 10 works solid, but it's time to upgrade to enjoy the (few) new features and Magix doesn't want my money :/

Many roads lead to rome, and especially in Vegas, it's useful to know some of them.

Better use Trackmotion 2D Glow (with Blur set to 0,0%) to create a border around every object on the timeline. Advantage also, that object can have any shape.

Do you know the name of the fx in german? I tried some things with "Räumlichkeit der Ebene", but didn't have a chance to get a solid border. 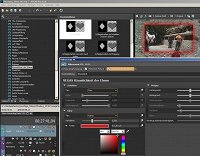 The bug whereby the Border FX does not work correctly with Event Pan/Crop when GPU acceleration is ON is fixed in VEGAS Pro 15 build 311. "The Border plug-in now properly recognizes when a frame size has been changed with GPU active".

I just wanna say THANK YOU Magix and THANK YOU guys for the help...it took a while but it finally - and officially - works with the latest update 😇😇😇