We have just released the third update for VEGAS Pro 18. Please give us your feedback in this thread.

If you already have an earlier build of VEGAS Pro 18,  there is no need to uninstall it, build 434 will overwrite your installation and retain your settings. Keep in mind that your computer will need to be online for activation after the update.

For more information, please refer to our official announcement with patch notes.

I hope you have a great rest of your week.

Robert, I sympathize with your frustration and appreciate how calm and respectfully you detailed your grievances, but this is a forum for seeking help with VEGAS issues, there is a community rule against using it to blow off steam. Let's try to keep this to just the support questions.

I will be glad to help as much as I can, and if I cannot, I will refer your issue to the development team, any of whom may see this and jump in to help as well, as they browse these forums when they're not too busy coding away, trying to make VEGAS a better product.

Regarding your crash, when you try to launch it, specifically what happens? Does it just not respond at all? Does a splash screen pop up, but then it crashes? Is there any error message displayed? Does uninstalling and reinstalling the software help?

We'll start with the software itself and try to see if we can find any fault in it that could be causing this. From there we'll see if it's possible that any outside influences are involved, such as driver issues (this is often a cause of VEGAS problems, especially with GPU drivers). As a rule of thumb, you want to make sure you have the latest Studio driver installed if using Nvidia GPUs, or the latest Enterprise Pro driver installed if using AMD GPUs. The game ready drivers have been known to cause issues in the past, plus those creative-focused drivers enable 10 bit color display if your monitor supports it, so they're a great thing to have anyway.

When you reply to these questions, please do so in a new thread so our conversation doesn't get buried under other posts talking about other things.

No problem here if I save the preset the (my?) normal way, look and than make it a favourit and show it that way 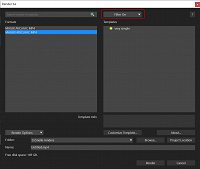 Sorry I meant the yellow star favourite label is not saved on exit. Thanks

Sorry I meant the yellow star favourite label is not saved on exit. Thanks

Than you looked not (good) at the given screenshot.
And this is after many restarts Probably you mean something else with a favourite label and how to show them.

@andyrpsmith, @musko, @j-v, I can confirm that this is happening to me as well. I haven't had to define any favourites for quite a while but I've just tried it and the result is, all my favourite render settings have been 'undefined'. They're still there, but there are no yellow stars. I've checked the file 'Favorites.settings' in C:\Users\[Username]\Appdata\Roaming\VEGAS\Render Templates' and it's being overwritten when a favourite is defined but it must be null data because I don't even need to exit VEGAS. When I go into the render dialog again in the same session, the favourites have been 'undefined' again. See my screen recording below.

@Jack S Why did you delete to see the favourites at the the templates at 29 sec. Compare to what I did in my last video at 34 secs. I switch to another favourite to see it and switched back to the one I wanted to see.

Update 434 has broken my install. I get the messages in the attached photo's when I try to use it now.

EDIT: Found a way to downgrade to previous version (Build 373), and everything works as normal.
See this forum post for download.

I had postponed installing the newest update until a few hours ago. Now every time I open Veg18 the update window always pops up, even though I already have the newest version. And when I hit the render button, I get an error message saying some COM device is not available. I have reinstalled 5 times and counting, and everything works just fine for bit, rendering and all. But suddenly next time I open the program, I get the update window in all its glory, and whatever COM thing-a-ma-jig suddenly don't work no more.

Below is the error message I get every time I hit the render button.

I have tried rebooting, running in compatibility mode and admin mode to no avail. The only thing that fixes it is to completely uninstall then reinstall. But as mentioned, works for a bit, but returns next time I launch the program.

Anyone smarter than me have a clue of whats going on?
Is there anyway I can downgrade to the previous update? And if so, how?
I can confirm everything worked just fine prior to the update, and all COM devices were behaving nicely.

Going to give this a try Dustbin to see if it fixes my problem as well.

Install/run with AV turned off

Upgraded from build 373 to 434 and now everything works like it's stuck in molasses...undos take 20-30 seconds, cursor movement response times take a couple of seconds, anything selected has response lags. Also, something new - noted that video tracks have a tendency to drop in preview, regardless of the quality selected.

I didn't notice these problems in build 373, or in version 17. Any ideas on how to solve this short of going back to build 373 or Version 17?

Hard to say- never had that issue. Resetting Vegas and clearing the cache can solve hard to diagnose issues (hold control-shift on startup). You will lose customized settings but not projects.

We have just released the third update for VEGAS Pro 18. Please give us your feedback in this thread.

If you already have an earlier build of VEGAS Pro 18,  there is no need to uninstall it, build 434 will overwrite your installation and retain your settings. Keep in mind that your computer will need to be online for activation after the update.

For more information, please refer to our official announcement with patch notes.

I hope you have a great rest of your week.

I am tired of fixes, can you give us a new Vegas built from the ground? Its core is a trash, although i have much better performance it crashes constantly, all the time and the live save is making it too slow to work on..

I am tired of fixes, can you give us a new Vegas built from the ground?

@arthur7
Realistically, that cannot be the case.
If you are willing to work on solving your problem (and not just grumbling) it would be more sensible to return to your own thread and continue answering the questions asked there.
https://www.vegascreativesoftware.info/us/forum/vegas-18-hangs-after-a-while--125615/#ca782026

Of course there are some functions that do not work as desired (as with every NLE) but a solution - or at least a workaround - was found here in the forum for most problems.
Mostly there are some adjustment problems - otherwise not so many users would work productively with this software here - and even earn money with it.

This has just recently occured, it was previously working fine, using laptop, with the same test clips. These are 4K DCI in camera conformed to 25fps from 100fps.

The only VP18 change I had made was to clear out things i.e. hold Shift+Ctrl and launch VP from shortcut, then check box to clear. I did this (at the time no RED screen issue existed) to see if it would resolve another issue, the render favourites not "sticking", it didn't.

I also uninstalled VP18, then re-installed, no change, but the VP18 render favourites are now working again!

I set DR preview to 0 and threads as low as 4, no change.

I had recently got Windows updates, but VP18 playback was ok after that, no issue. I had the January GPU drivers, but since updated to the latest February ones ...72.
I tried using WWAAG's KWIKproxies (used Vegas Auto ones) in case it is a proxy related issue, which I suspect it is related to because the RED Preview Screen only occurs when using proxies, no luck.

I hadn't installed any new software recently that might explain it, I checked out the install dates of Windows update and any software, no times match to explain it.

It isn't a camera/card issue as an earlier test clip that was ok, is now giving the issue. I tried not using GPU for HW Acc. changed things in I/O, no luck.

I can overcome the issue by using VP16, last build.

Just putting this out here in case anyone else has similar problem, but sorry, I don't have a solution, maybe next VP18 build will fix it?

For greatest stability I used Acronis True Image to go back to an image of Windows 10 version 2004, installed on 8/18/2020 and then prevented it from auto-updating past that point. This was done after Windows found a way to get-around my previous settings & auto-installed an update and/or drivers in January without my approval. The update Windows 10 auto-installed in January messed-up some of my other apps but IMO I also lost some stability with Vegas, as it crashed a couple times when it previously did not...

I've been using V18.434 for paid work since the day it was released and it's recently become one of my favorite & most stable Vegas releases since I started using Vegas 3.0 two decades ago... This week I got double my going rate to expedite an order. Once I had all of my edits done for a 1.5 hour project, I opened (4) instances of Vegas & let them render the 4 different file choices while I started another project on another workstation... One was a Blu-ray MainConcept MPEG-2 that gets imported into DVDA.... I set it to high priority so it finished first, I dropped it into DVDA, authored my Chapters, and had the Blu-ray ISO done about the same time as all of the other files: a 4K intermediate, 4K HEVC & 4K AVC. When the files finished, I saved them to the client's USB 3.0 drive while I finished burning the Blu-ray, printing & laminating the disc artwork, and custom BR Jacket, etc.

I could not have pulled-off the exact project using any other NLE in the same time-frame. Although I use other NLEs for collaborative projects, Vegas 18.434 is my favorite tool in the toolbox for gettin' it done & makin' some money.