However, when I bough VP15 I found that I cannot use Sony AVC encoder any longer as it does not play nice with 32-bit video levels pixel format. So I decided to to give Magix AVC encoder another try.

I opened my old project from VP12 era where the glitch was extremely visible in VP13 and VP15 and rendered it with Mainconcept/Magix AVC (CPU Only/Mainconcept AVC mode as I have AMD graphics card). The glitch is still there.

I simplified the project and now it has only one media file (m2ts, ~50MB, 1080-50p from Panasonic TM900) and no filters. The project in 8-bits pixel format and render quality set to Best.

Then in rendered video I have very pixelated frames. Not all of then, only few, but they are very visible as when the file is played some areas looks like they are 'pulsing'. If stopped and watched by frame some frames are extremely wrong.

Mainconcept encoder included in VP13 and VP15 (after changing Internal setting) are also affected. I was not able to check if mainconcept encoder dll from VP11 still do the trick as I do not have VP11 installer any longer and do not know where I can download it.

When I render using Sony AVC or with x264 encoders (using frameserver) and there are no such issue. My hardware & OS completely changed since than.

So, here some details. 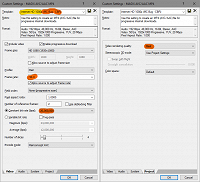 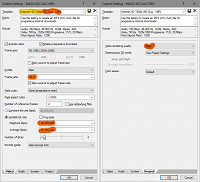 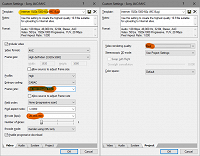 Link to zip file with the project & source media and screenshots (~100MB):

- Render using VP11 Mainconcept AVC does not have such issue

- Sony AVC gives slightly blurred, but not so "pixelated" results with even smaller bitrate (for some reason it does not use all bitrate specified in encoder settings).

Thanks Cornico for looking at this.

Can you point me out and specify on the next screenshot from that timeline where to look for your seen "pixelation"?

On the arm, face, T-shirt and helmet. They are less visible as screenshots were resized. I'm opening two images in 100% zoom with my picture viewer and switching from one to another.

Scroll to the boy, and hover mouse pointer over picture to see Magix frame. Move mouse out to see Sony AVC.

In dynamic (when you watch the video) issues on these red things is very visible as they are 'pulsing' (not sure how to explain it better, English is my second language, sorry). This is how I originally spotted them.

In my original project the situation was even worse. It is possible to make it worse in the test project: just move the source footage to 00:02:30 and fill in the gap with something "media generated" (Solid colour, checkerboard. In my real project it is other footages here where there is no grass that is always hard for encoding).

I'll definitely check the project you uploaded at home.

However, could you advice, what project settings you mentioned? I have not noticed any differences in you project settings picture other than Deinterlace method that is not relevant here as there is no interlacing involved at all. Did I miss anything?

I created the demo project in VP11. The reason -- I'd like to be able to open it in different VP versions (VP11, 12, 13, 15) for checking. However, when I tested, I created the similar projects in VP15 with the same results.

P.S. I saved images from browser preview and they are smaller than I uploaded. Looks like the forum modifying these images. So for comparison the screenshot from the archive I uploaded yesterday should be used.

Was hardware assist on or off during your tests?

GPU acceleration is switched ON. I though about switching it OFF, however decided not to do this as there are no quality impact when SonyAVC or frameserver used.

In VP13 encoders setting 'Render using CPU Only' was used (the option is available on encoder properties).

In VP15 there is no such option on encoder properties as I have AMD CPU & GPU. Also, there are no profiles for NVENC/QSV available.

I downloaded and checked your renders. The issue is still there. You can compare Sony AVC frame 491 vs MC AVC frame 490 (I do not know why the frames slightly shifted).

Then I looked at your QS and NVENC results and found that QS is even worse than MC AVC, but NVENC is the best from them (however, I'd say they are worse than Sony AVC on lower bitrate).

Archive with the screenshots from your renders:

Having fun with video analyzing...

Simplified project (only one fragment in project with absolutely no filters, transitions etc), rendered into VP15 Magix AVC/SonyAVC/x264 with slightly different encoder settings (so renders files at the end have the similar bitrate) and using MSU Quality Measurement Tool for analyzis. Interesting. Too many new things (PSNR, SSIM, VQMT etc). Something looks really funny, for example this 'blocking' metric:

P.S. One more time: Mainconcept AVC encoder included in VP11 does not have such issue.

A few metrics from the archive:

I thought I would add to this excellent post as your little package for testing is great. Attached are screenshots from my own renders on VP16. I couldnt get the quality tool to work as I dont have pro but visual was more than enough to confirm nothing has improved in this version.

Uncompressed (all is fine)

VP 16 and Magix HEVC and NVENC (the best option for speed and quality. But still not Sony AVC levels)

Magix devs. I know you read these forums. We love Vegas. Can we get some input here? For footage which uses a higher bitrate than Sony to deliver MUCH lower quality does warrant some investigation. As a test I used the sony AVC but at a mere 10mbps. Over half that used for the Magix encoders.

I get the exact same results from my Canon C100 footage, 8bit

@mintyslippers How does it look if you check "Use deblocking filter"?

@mintyslippers How does it look if you check "Use deblocking filter"?

Not a single bit of difference. That's why I think it's not setting the parameters correctly. 2 pass is slower than Sony and still not as good.