From time to time, most editors have a need to upscale or uprez some of their video clips.  It can be done in Vegas by simply rendering using a higher resolution template with/or without use of the Smart Upscale Fx.  There are also many external open-source resizers that are available.  The question becomes--how good is the upscaling?  Most editors simply use the “eyeball” approach which is perfectly OK.

However, like render quality (RQ), some may want to see more evidence-based objective measures since “eyeballs” are known to differ dramatically.  Here’s an approach that makes use of the RenderQuality tool that is freely available in the HappyOtterScripts Free Tools library. https://tools4vegas.com/library/

The idea is very simple.  Here are the steps:

1. Begin with some “full” resolution video footage.
2. “Down rez” that footage to the same aspect ratio and frame rate using a high quality resizer--or any resizer for matter.
3. Then "upscale” the "down-rezzed" video to the original frame size, again keeping the same aspect ratio and frame rate.
4. Compare the quality of the original “full” resolution video footage with the “upscaled” video using the RQ tool.
5. For all renders, it is important to use a lossless codec such as MagicYUV, UtVideo or Uncompressed.

For the following tests, the footage I used may be downloaded here.  https://www.dropbox.com/sh/8fzp947zo2eijnf/AADcbXXw5AxNYrCN96I2brvZa?dl=0
The original “out-of-the-camera” file is Butterfly.MTS which is FHD at 60P.  The down-rezzed test file is UpRezTestClip.avi which is 854 x 480 at 60P.  It was created using the Lanczos-4 resizer with MagicYUV RGB as the format.  As you can see, there is a fair amount of motion content in the test video.

Here’s a demo of the procedure used for one of the conditions--a straight render from Vegas using an FHD render template. And here are the results which more or less speak for themselves. 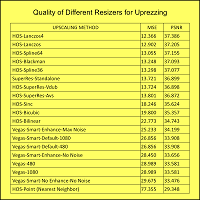 From the results, the two Lanczos resizers resulted in the smallest error, although the Spline, Blackman, and SuperRes resizers were not far behind in terms of quality.  Again, all of these are open-source and can be freely downloaded.

It should be pointed out that the Vegas Smart Upscale Fx should not be judged in terms of its error alone since I suspect that the Fx does some noise filtering and sharpening which would always increase the measured error regardless of the resizer being used.  To judge its quality, one has to resort back to the “eyeball” method, which as I stated at the outset, is perfectly OK.  The only truly valid results are the Vegas-480 and Vegas-1080 (different project frame sizes) which were identical as expected.

RQM FFmpeg is now available for download at https://tools4vegas.com/library/

@wwaag Thank you. I ran it on no. 27 Sony file in the FHD table posted on the previous page. The results are very similar.

Is the ffmpeg "DB" value (14.496229) similar to your calculated MSE, or a completely separate entity?

I understand the limitations of ffmpeg based versions, however it is much easier to use as almost any video format can be used.

I've also noticed some metrics inconsistencies (as @wwaag already mentioned a few times). For example, rendering using UT Video encoder from Vegas and VDub2 produces files that do not have visual or ffprobe differences but gives different ffmpeg PSNR/SSIM metrics. I will try to investigate and find solution.

P.S. I'm trying to create my own program that is calculating metrics using ffmpeg. With multiple files and "per frame" graphs. PM me (do not hijack in the thread as it is off-topic here) if you'd like to test it. Warning: this will be my first program in C# so I'd expect quite a few bugs/glitches. Here is screenshot from alpha version I have: 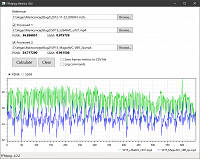 Looks very impressive! Wishing you the best of luck.

Ideally a drag and drop option into app interface for source and file(s) to process.

A counter display also indicating how many files have been processed, the number of files to process, and the current number of file that’s being processed out of total, ETA.

If you’re not using a menu/help/about dialog then show current version number permanently on screen somewhere.

Radio button selections for discrete items, SSIM, PSNR etc plus an “ALL” option.

Safe to say that thanks to my own efforts and now this contribution on your part that this thread of WWAAGS re: Uprezzing, is completely hijacked, if its important to him he's probably close to losing the will to live.

Mind you, if I don’t get a haircut soon i’ll be also.

I just finished skimming this thread top to bottom, and I see I've got some catching up to do. I have been doing some tests independently, as I was challenged to repeat my banding tests from 2015 using the x265 8- and 10- bit encoders as a route to dithered 8-bit output, the question long being a favorite of internet hobbyists, but I digress.

The "averaging" cautions raised by @fifonik are especially appreciated; I suspect that paying close attention to RMSE regression data can be helpful here, but I avoided the issue (cheated?) by using static source.

I also got involved in a parallel discussion about the higher, and almost undifferentiated scores using x265's internal Tunes (the SSIM Tune being almost identical to ffmpeg). Using highest quality settings, the x265/ffmpeg numbers were maddeningly close to lossless, and as I said, undifferentiated. It struck me as being a virtual whitewash. See figure 2 below.

Part of today's tests also involved making a low resolution target to test against the venerable MSU QMT free utility, and with this static SD source, the MSU, x265 tune, and ffmpeg SSIM scores were almost identical. The HO QMT was about .01 lower, but as Wayne points out, is more differentiated, thus more useful for comparisons.

The discussion about UT reminded me that my fascination with it began in 2011 as a result of visual difference comparisons, not numeric scores. Using the Belle Nuit target, it came in indistinguishable from Sony YUV, an acknowledged reference warhorse. So I'm going to be doing a lot more testing, one can be sure, in light of the inconsistencies being reported here. I'm still a huge fan of UT 422 as a lightweight alternative to ProRes.

For anyone interested, here are the initial static x265 tests, with the important enhanced visuals. I think that when it's a tossup between paradoxical data sets as described several times above, the inclusion of "some" visual data can help to settle the score (literally), and probably rightfully so.

This is especially true when PSNR (shadow noise) starts to become an issue, such as doing high quality restoration work with analog source, or trimming noise from Float -to- Integer projects. 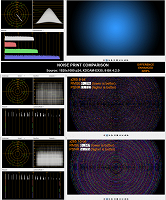 Being now the third hijacker to usurp @wwaag's uprezzing thread, I'm just going to sit back and be a fly on the wall ...

Some of this reminds me, now for quite some time, of the old days and ways of Camera lens testing. It was always a challenge to interpret the sometimes byzantine comments of the reviewer, to see what was said and more importantly what wasn’t said in his conclusion and analysis of said lens.

Most importantly I always felt the reviewer would have one eye on the task in hand but both eyes on the lens manufacturers magazine adds contributions.

To a large extent thankfully, lens MTF testing removed this subjective only interpretation.

At least that way for sure you could eyeball the results yourself and agree or disagree with the reviewer, but having the maths was a great step forward in objectivity.

I've just uploaded a new version of RQM FFmpeg that now computes VMAF as well as the other metrics. Here is a screen grab. 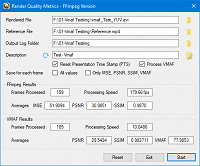 Note that you must use an FFmpeg version that includes the VMAF library. The latest Zeranoe nightly build of FFmpeg has that library and is what I've used for testing. https://ffmpeg.zeranoe.com/builds/

RQM FFmpeg can be downloaded in the HappyOtter free tools library at https://tools4vegas.com/library/