It is important to choose the recording settings carefully if you intend to edit the recorded videos in VEGAS Pro. Many formats that OBS Studio can record, will not open or play well in VEGAS. However, when done correctly, videos recorded by OBS Studio are more compatible with VEGAS than many other screen-recording options.

Make sure the Recording Format in the Output settings is mp4.

These output settings work reliably for me. I changed very little from the default values. These settings use the Simple Output Mode to record AVC video in an MP4 wrapper using the x264 codec with a crf (constant quality) value of 23, which is the x264 default: 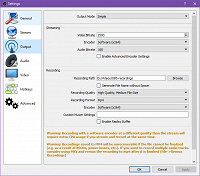 If quality is very important to you, and you can tolerate larger files, you could try setting the Recording Quality in the Output settings to "Indistinguishable Quality, Large File Size", which uses a crf value of 16. Note that quality increases as the crf value decreases, however it is generally not worth using a crf value lower than 16, as the quality gains are very small.

If you have a GPU that supports hardware encoding such as NVIDIA NVENC or AMD VCE, then it is generally OK to use that instead of Software (x264) encoding, but be sure to still use the mp4 recording format.

If you still have problems with the above settings, NormanPCN proposed some alternative settings in this post "that have a lower decoder overhead for edit performance than commonly used settings". You need to switch the Output Mode to Advanced to access these settings.

Also in the Advanced recording mode you could try setting Tune to animation if you are recording gaming.

Any settings you use on the Video page should not make your recorded videos "incompatible with Vegas", but of course higher resolution and higher FPS (frames per second) values will increase the load on your computer during playback. These are my regular Video settings for screen-recording demonstration videos:

3. IF YOU STILL HAVE PROBLEMS

If you have trouble opening or playing back videos recorded with OBS Studio, despite the above advice, then please make a new post on the forum with this information:

Once again, thanks for saving some wear and tear on us oldtimers.

But only up to a point. https://www.vegascreativesoftware.info/us/forum/analysis-of-rendering-to-a-target-bit-rate-vs-constant-rate-factor--109452/#ca675408

It is generally not worth using a crf value lower than 16, as the quality gains are very small.

The likelihood of the output data to be larger than the input data is quite probable at RF16. Of course the point of superfluous encoding was reached long before then. so isn't it better to free up cpu cycles for the source generation?

But only up to a point. https://www.vegascreativesoftware.info/us/forum/analysis-of-rendering-to-a-target-bit-rate-vs-constant-rate-factor--109452/#ca675408

It is generally not worth using a crf value lower than 16, as the quality gains are very small.

The likelihood of the output data to be larger than the input data is quite probable at RF16. Of course the point of superfluous encoding was reached long before then. so isn't it better to free up cpu cycles for the source generation?

I have rephrased that part, to try and avoid any ambiguity.

In the "Simple" modes, which I prefer to recommend in an FAQ post to keep things simple, the crf jumps from 23 in the "High Quality, Medium File Size" preset, to 16 in the "Indistinguishable Quality, Large File Size" preset. I'm pretty sure 16 will be less lossy than 23, so it's worth mentioning as an alternative even if it may be a little overkill. I did render my last couple of YouTube videos at crf 16 and they came out great, so I would consider that setting myself for recording tutorials for YouTube. Users can always tweak settings by switching to Advanced mode and using for example crf 18-21 if they want something in-between.

I have also added sentence about trying animation tuning for recording gaming, as per your suggestion.

I agree that the jump to 23 in the next closest preset is a little weird, as most production types would consider that too compressed, and prefer to work in the 18-20 range.

It's the size factor and thus system hit that goes off the rails below 18, as john_dennis' revealing graphic (linked above) clearly shows.

Bumping this thread because several new users are capturing with hardware encoders in OBS and then blaming Vegas for the quality. [EDIT] However, there are some questions raised about timeline performance with x264, and I'm going to try to dig into these (within the limits of my modest system).

Thanks musicvid - Your 'Better Method' for Vegas to YouTube was a Godsend a few years back and having just discovered OBS was delighted to find your recommended settings here. All the best, Geoff

Do let me know how they work out, @GeoffM as they have not been tested in all circumstances esp. game capture. And feel free to post modifications. These are "theoretical best" quality settings.

The recorded video (from a Logitech C920) looked great - if a bit big (1.5GB for 29 seconds of video 😬) but unfortunately I couldn't get the file to import into Vegas - perhaps because I'm running Movie Studio 15 as opposed to Pro.

Looks like I'll have to hunt around and experiment a bit more because I suspect using a webcam (instead of the EOS 600D I used with the 'Better Method' setup a few years back) I may not need anything like the same video quality.

The UT AVI codec must be installed on your system in order to use it with Vegas (any version). It does not come pre-installed.

I'll make a note of that in my post. @GeoffM

Hi again @Musicvid Quick Question: I've had a play with the settings and they produce excellent quality video and sound from my Logitech C920 and Rode NTG-2 (via Tube MP valve preamp and Komplete Audio XLR - USB ADC).

However, compared with the 1080p .mov files from my previous EOS600D setup (then processed using your 'Better Method' for Vegas to YouTube with Avid DNxHD codec etc) the .avi file sizes out of my Logitech C920 webcam via OSB are about seven times as big (1.7GB per minute versus 250MB/min).

I'm about to shoot a series of tutorial talking head videos using the Logitech C920 ->OSB ->Vegas -> Handbrake -> .mp4 and am just a bit concerned about working with such bigger file sizes.

I don't want to run into problems part way through shooting/editing the series, so I'm wondering if you can either advise (or point me at what you consider solid advice) on how to adjust the OSB settings so I'm getting similar files sizes to the previous workflow. I know my PC setup can handle those kind of file sizes and data rates just fine.

BTW - if this is an unreasonable request feel free to say so. It's just that there is so much advice out there - much of it from people who don't have the chops.

x264 works just fine, and I use it for most of my webcam and Zoom work, which isn't that demanding.

@GeoffM Is UT AVI from OBS working for you still?

Either OBS, or Windows Update, or UT, or something, is causing bad files. I'll take the post down if anyone else is having a problem.

@GeoffM Is UT AVI from OBS working for you still?

Either OBS, or Windows Update, or UT, or something, is causing bad files. I'll take the post down if anyone else is having a problem.

Using the the UT Video codec that is built into OBS I tested recording and playback in vegas. It works fine. You choose it via this setting.

nvm. got it working by reinstalling UT on Windows.

Hi. I'd appreciate your assistance.

Should I set Vegas project to match exactly 30 FPS?

Would there be better editing and preview performance if the OBS media in Vegas timeline matches exactly the same FPS set in Vegas Project Properties? 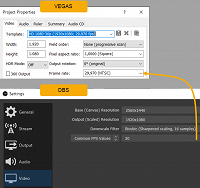