I just bought the Vegas Movie Studio suite, and I am exploring its possibilities with great interest.

I am surprised by the absence of a better connexion between MS (Movie Studio) and DVD-A. Apparently, the only possibility is to physically write a file on the hard disk from Movie Studio, and send it to DVD-A. Am I wrong? The film is then frozen in the DVD project; by contrast, using Nero, you can use virtual edition (without writing all these separate files on your hard disk), and therefore change any adjustment until the last moment. It would be much preferable to be able to directly send MS projects into DVD-A, and let DVD-A ask MS to make the final conversion when burning. Is this possible?

Moreover, if from MS I compile a film and use the button to send it automatically to DVD-A, every time I send a new film I create a new DVD-A project. This makes no sense. Am I doing something wrong? Can I send a film to the current DVD-A project?

Many thanks for any advice

The programs do talk to each other and you should be able to send your video and audio directly to DVD Architect from Movie Studio by selecting the Make Movie option for DVD with menus.

Which version of each program are you using on what operating system?

Was DVD Architect on your computer before you installed Movie Studio? This shouldn't make a difference but it might.

No problem here.
Look, maybe it helps you Thanks very much for your comments! It is very kind to take the time to answer my message. Still, I am not sure if my question is solved, since I had done exactly what is illustrated by this little video. Indeed, it shows that Movie Studio has, first to write a file physically on the hard disk, and then send it to DVD-A. This is not virtual, but real, edition. Nero proceeds differently, and you can prepare and burn a DVD without ever writing a gin file on your computer.

Moreover, each time you send a film from Movie Studio to DVD-A, apparently you reach different project in DVD-A. I hae found no way to select the target in DVD-A. So, one cannot progressively build a single DVD with several chapters in this way. If you could import Movie Studio projects as (virtual edition) projects into DVD-A, the problem would be solved.

Concerning question the order of installation of the softwares, as I was saying I just bought the Movie Studio Suite, and installed it as a whole on my computer. The versions I have should then be the latest ones.

Your question was not about how DVDA works but how to handle in VMS for that case.
What you want to do you have to make of every film a file for DVDA and also at the same location the soundfile, giving them name and numbers.

You than can import them to DVDA all in the same DVDA project to show up somewhere in the menu.
But that depends on more knowing of DVDA and that was not your question.

@F-Laloe I occasionally use Nero Video, but not for serious editing. I doubt that it doesn't physically write a file to your HD. It's just that the file is only temporary and is deleted after the disc image has been created for burning. In the Application settings you can tell it where to create temp files.

@F-Laloe you can trust @j-v on this. The basics for Make Movie, Advanced (and) Render As are here 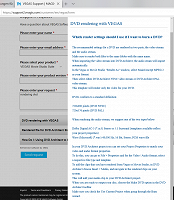 Thanks to all three of you for your kind help!

- To j-v: yes, you are right, my point was not about DVDA. More precisely, it was about the unidirectional or bidirectional connexions between VMS and DVDA. As far as I can see, presently it is unidirectional: you have to save a file on your disk in VMS and send it to DVDA, film by film. It would be even better if is was bidirectional: if DVDA took VMS project as inputs, and asked VMS to process its projects only when burning the DVD, one would get much more flexibility. I was asking the question because I am used to Nero, which proceeds basically in this way.

I am not saying that Nero is better in general! The reason I have bought the MS suite is precisely that I would like to benefit frome more functionalities, and this is indeed the case.

- To EricLNZ: I also completely agree with you. Nero is probably more convenient and faster for relatively simple projects, but unable to do things such as DVD with several layers of menus and submenus, and many other things. In the future, I will probably sometimes use Nero, sometimes DVDA, depending on the project.

I do not think that Nero writes termporary files every time a film is completed. I certainly writes temporary files, but only during the last step, when burning the DVD (or writing it to the hard disk). Until the vary last moment, you can adjust the content of every film as you wish.

- Thanks also to vkmast for the useful advice and document. I do trust the content of the messages on this list.