Using MSP16 on Win7.  Working on video with multiple clips.  Trying to copy a transition (Cross Effect - Blur) from first transition to following ones.  According to various sources I should:

Doesn't work. No transition copied to remaining events.  Same thing with VPro19.  What am I doing wrong or is there a different way to do what I want?

@RgVideo In MEP Premium i can add transitions to all events with 2 clicks so when i came to Vegas I looked into this ages ago, Vegas doesn't do that but adding Excalibur will let you, @jetdv will help you, & @jetdv any chance of a video of how it's done as i'm still interested but never got around to getting Excalibur, Thanks,

@RgVideo You missed one important step.

After selecting all the events, you must group them by pressing G.

Paste Event Attributes will then paste the transition to all events.

@Gid To my knowledge Excalibur only works with Vegas Pro, not Vegas Movie Studio.

@EricLNZ I have VP19 but the OP has MS by the looks of it, good for me unlucky for him, Thanks 👍

@Dexcon Yes, I've just tested with a sequence of clips in MSP16 and you're correct. The events don't need to be grouped for the copy to be good. I was thinking about other operations, like expanding a group of events, where the events do need grouping.

@Gid, as was mentioned Excalibur will only work in VEGAS Pro so the OP would not be able to use it. But to add transitions, select the events containing the the crossfades, go to the Events tab, select one or more transitions and click on "Add" to move them to the bottom box. Those transitions will be randomly added across all selected events. Naturally if you want the same transition on all of them, you would only select that one transition.

@jetdv comments makes me wonder are there crossfades already that can be changed to the pasted transition, or is the OP starting with cuts only?

OP here. Gotta rush off. My initial transition on first 2 clips was made with:

After doing COPY and PASTE ATTRIBUTES I think the transition type is actually copied but not the cross fade curves, so it's not visually apparent.

Thanks for the comments. More later

@jetdv comments makes me wonder are there crossfades already that can be changed to the pasted transition, or is the OP starting with cuts only?

@DMT3 good question. There would need to already be crossfades for the copy/paste to work.

@Dexcon I still can't repro what you're seeing. This is a screen recording of copy then paste transition in MSP16.

Is this not what you're seeing?

I'm using Vegas Pro 19 which, as the OP mentioned at the outset, also experiences the same problem as with MSP16.

I just tested this in MSP13 on an older desktop - it's exactly and precisely the same result as with VP19.

@Dexcon I see what you mean. It would seem that this behaviour is due to the apparent fact that a cross-fade always occurs at the start of an event, as can be seen in this image. 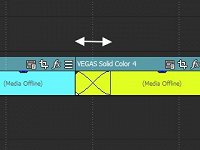 Therefore any transition copied will always paste to the beginning of the 'selected for paste' event.
Does that make sense to you? This would seem like expected behaviour.

G'day @Jack S ... I suspect that its possibily a long existing bug mainly because the 'Selectively Paste Event Attributes' context window in VP19 has a transition option which reads 'Pre and post Transitions':

... which suggests that it is the intention for the tail transition to be copy/pasted. On the other hand, it could equally be that the inclusion of 'post' in that option is in error because the original intention and program coding going back to Sony days was to copy/paste only transitions at the head of the event.

Copy/pasting a transition to another event should still work even if that other event doesn't have a fade/crossfade currently in place. It's then just a matter of dragging the event's fade handle to reveal the pasted transition.

Hi @Dexcon . That all makes sense. Thanks for your explanation.

Just thought i'd mention MEP will add transitions (any transition) to All or All after the cursor regardless of whether there is a gap or an already applied crossfade, I can also choose the duration of one, all or just the selected, why Vegas doesn't have this simple feature is beyond me, it's been part of MEP for as long as i can remember n i have had it since 2004.

Just thought to remind that MEPs are now Movie Studio(s) 2022. Even though that is a totally different product from MAGIX, the serial number of VEGAS MSP should be valid for upgrade pricing.

Of course test with a free trial first to avoid disappointment in case you find that is not for you. And you'd need a Win 10 or 11 OS.