Anyone edit in Vegas on the Surfacebook2? I got the decked out 15" version with GTX 1060 for work and editing - thinking it would sail through VegasPro 15 - and it does very well... HOWEVER... Strangely when I add any kind of effects, I cannot see the effect in the preview window change in real time.

For example, I open an effect, I change a value on an effect (such as contrast), the preview pane doesn't reflect the change in real time. I must physically click out of the effect - then the preview window refreshes and I see the changes I made. This is EXTREMELY annoying as you could imagine. :) It does this with ALL effects, from Sony built in effects, to 3rd party such as FilmConvert, etc. I believe this is somehow due to the GTX 1060, because when I go to the video settings in properties and switch it to the onboard graphics (UHD Graphics 620) and restart - all works as normal (albeit much slower).

Any ideas? This is killing me as I wanted to rely on this machine as a mobile Vegas machine - and it is blazing fast to edit - but having to switch between graphics cards just to see effects update in realtime is very annoying.

"better is read here and special the last post"

@Cornico @vkmast Have the exact parameters that cause this issue been established yet? i.e. GPU models/families, driver versions, OS versions. I'm thinking in terms of an FAQ post about it and a listing on the "known issues" thread.

Thanks! I've been using Vegas for 15 years and have never had this issue. Looking forward to a fix. :)

@Cornico is there a driver to possibly roll back TO on the GTX1060? I see that it only goes back to 368.xx, so I'm assuming I'll have to live with the problem for awhile until the fix comes about.

If you guys need any spec info on what I'm using - its simply the lastest version of VegasPro 15, on a stock Surfacebook2 15" with GTX1060

@(untaggable)Nick, Cornico's been my source on this. I do not have any Nvidia to test. A FAQ or listing this does seem appropriate.

Try just typing @ then waiting for the list of this thread's contributors to pop up. Alternatively type @hope and that might narrow it down.

I'll make a note to try and compile a list of affected systems and see what the pattern is.

Thanks. So how does this sound for a "known issues" listing?

Does anyone NOT have this issue using a driver later than 382.53?

Some of the topics (quoted by me) on this

I don't see any reference to a Windows version lower than 10 in those posts, but that's not to say it doesn't happen. Version 2.0:

@jeremyscottproductions
Use this link to do an Advanced search for all available Drivers.
http://www.nvidia.com/Download/Find.aspx?lang=en-us 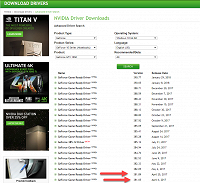 On systems with an Integrated Intel GPU and a discrete NVIDIA GPU, the NVIDIA driver has an option for specifying which GPU should be used with the application for general display operations. It can be found in the NVIDIA Control Panel in Manage 3D Settings, and is also typically available in the context menu (right-click menu) for the application. It would be helpful to know if altering this setting alters or corrects this odd behavior.

...I use the latest 390.77 with also no problems, but I had to take my precautions that it should be possible without problems.

The ones I described already many times:

1, On laptop that same as the Magix employee now mentioned
2. On desktop by connecting my main display not on the NVidiacard but on the Motherboard.

So your problem is fixed by taking those precautions, and not by driver 390.77.

Which means that @GJeffrey is on his own in being problem-free with a driver later than 382.53, unless someone else know different.

@jeremyscottproductions did you find a fix for this, i have just the surface book 2 with the 1060 and have exact same problem. Any luck with a earlier driver version? Thanks!!

SOLVED with Vegas Pro 16!! So happy about this.... I'm finally able to use my $3000 laptop for what I bought it for, and without a bunch of crazy hacks that didn't work well anyway. :)

Go in Windows Settings app and set it to run Vegas on the High Performance GPU. Otherwise effects only refresh of acceleration is set to the Intel CPU.

This problem is also solved with the latest NVidia drivers updates from 399,07 on and higher.