Rendering the same project in Vegas Movie Studio 16.0 Platinum (Build 175), all is the same, except that the filesize is anywhere between 14 MB and 101 MB, depending on the Profile setting (Baseline, Main or High) using the codec format Sony AVC/MVC and using Template “Internet 640x480-25p”. Depending on the Profile settings, the data rate is between 1634 and 11985 kbps !

I am totally happy with the quality of the Studio 10 rendered file (7.3MB), so I wish to have this again, when using Studio 16. (have to do a lot more of those old files that I didn’t do in Studio 10 yet...)

I remember, that in Studio 10, the codec format Sony AVC/MVC was available, but there also was a more general Internet MP4 codec, which I used. Don’t know the exact name, because I don’t have Video 10 on my PC anymore.

Where can I find this general Internet MP4 codec and/or how to plug it into Video 16, or which settings to use to create more or less the same quality file that I had with a size around 7-8 MB ??

Thanks for any help !!

For sure also possible in VMS 16 Pl.
Go to Make Movie >>>Save to my hardrive>>> Mp4 and choose this and also the customized settings

You will get a video with this MediaInfo 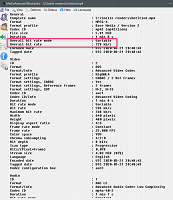 Who would have thought that a combination of 1280x720-30p, and then picking the Frame Size NTSC square pixels 640x480 would do the job. Excellent !

Thank you very much / Hartelijk bedankt !

Glad I could help you, but I have question because VMS PL 16 has a lot better renderpossibilities: Do you use a Graphic Card on your used hardware?

Thank you for your interest. Yes I do, recently I had to buy a new PC and I ordered the "Gigabyte GeForce RTX 2070 Super Gaming OC 3X 8G, 8192 MB GDDR6". I'm not the gaming type at all, but this was supposed to do a good job on video rendering as well, and also the 32GB RAM helps to have a smooth handling.

In VMS PL 16, under Video Preferences, I defined to use this card, so what other 'tricks' could I use to improve the render qualities ?

If you use the latest Studio drivers for that GPU

the help in Options/Preferences/Video is very good.
Rendering with help of that GPU (NVENC) goes with me 8 times faster than with the old Mainconcept or Sony AVC codecs.
Look for the templates only for AVC with the Magix AVC codec

Just tried. This is in the welcome message: "Unfortunately it is not possible for you as a member to signin, because soon we stop it . Well you can of course consult various topics..

Been there long time a moderator, but since one year no more. So I cannot change anything, but this invalid message will I just report that it must be removed and you can sign up.This is caused because the forum would stop, but it is now someone else adopted that ensured survival.

Isn't this the English forum? If not, please tell me where it is. I do not read German and I would like to benefit from this discussion. Thanks!

@Michael-Slusher re Chrome, see this. (Btw, some of this discussion is in Dutch actually.)

Isn't this the English forum? If not, please tell me where it is. I do not read German and I would like to benefit from this discussion. Thanks!

Yess this is the english part of the forum, but all things the maybe are important for other members I translated already in the comments.😄

Sorry, my fault, I apologise, shouldn't have started to write in Dutch just because there was another Dutch person 'on the other side of the line'.