after adding stabilize,
the apply button is always cleared !!!
How do I regularize this?

I do not have your language version of the program, but I'm pretty sure it has the same advice as in the English version. That is, "this plug-in must be applied to a clip or subclip as a media effect". Please read the whole advice in your own screenshot. 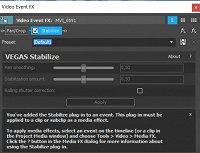 "I believe" that the issue of internationalization should not influence. I just followed the contents of the manual, that is, I tried to trigger on a clip, NORMAL. But the button goes out as if there was no action involved. 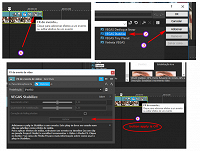 I never mentioned that the localization/internationalization would influence. Please read again this comment. And

(or the same advice in your language version.)

feel for understanding s / internationalization /
ok Only with this referenced post did I understand
it works on the clip located in the media of the project
only (I was applying on the timeline)
thanks for your help.

Good that you seem to have solved your issue. Please study also the "several methods available for adding effects to video. Video plug-ins can be added to tracks, video events, source media files (via the Project Media window), or to the entire video project" (in online Help, "Adding video effects").

ops ... Now this problem: I did a simple test with a video mp4 and applied the stabilization. Then rendered and the result was a video displaying only black screen. Any suggestions for you to evaluate?

Maybe you had a problem to understand what the error message tells you about adding to an "event". To understand this: Event is called for every item placed on a timeline, that can also be a clip or a part of a clip.
The stabilisation placed on such a clip has to be an add to : rightclick only the videopart of it and choose MediaFX.
On a part of a clip you first have to make a subclip through rigclick and add it the same way to that subclip in order to make a better analysis for only that part.

the clip original before stabilize have this properties

You used Handbrake with wrong settings.
I don't know your sourcesettings before sending it to Handbrake, so publish here the original MediaInfo of your made videos

Ok Now I solved and understand: (I restructured the clip) clip, project has to be the same size (width, height, frame rate)

I'm sorry, but I still can not get what you are doing.
The file from which you published the MediaInfo is made by Handbrake.
But Handbrake cannot make video's, Handbrake is for converting video from files made through screencapture, video app's or camera's and so on.
We like to know wat that first video has for Info before you let it convert by Handbrake.

j-v: is there a difference in the stabilization between versions 15 and 16 of vms platinum?

j-v: is there a difference in the stabilization between versions 15 and 16 of vms platinum?

VEGAS Stabilizer is the Sony Legacy Stabilizer which if I'm not mistaken is actually Mercalli v2.

VEGAS Video Stabilization is new in v16 and is Magix's version.

I think, until there is an improvement in the VEGAS Video Stabilization, the older legacy Stabilizer actually works better, at least on the test I have performed.

what should have been done I did now successfully! I consider that the manual was not well written, for those who are familiar with the product. Thank you!

In order to help you with your questions about the render export with the highest quality we have to know exactly what the MediaInfo is of that Avi sourcefile to give you the right project- and rendersettings and when needed I can give you the exact settings for Handbrake if that file needs to be converted to a steady framerate.