I just got a new computer. It has an Intel Core i9 processor. GFX card is the Nvidia 1080Ti SC2.

I can't seem to make a working MP4 file.

Vegas renders it. Nothing recognizes it no matter which "flavor" I choose.

I tried the SONY AVC codec, the Magix Codec and the Intel Codec. I want to create a 1920 by 1080 file. At this moment I do not care if it's interlaced or progressive. No matter which codec I use the resulting file won't play on the system in any player. Adobe Media Encoder doesn't recognize it. Neither does YouTube.

I can render other types of files. I just created an m2t file and that works fine. Just not MP4's.

I am using the latest drivers for the Nvidia card.

We would need to see the settings that you use to create the MP4. Post a screenshot if you can. and then a Mediainfo report of one of the MP4s that will not play.

It's the default codec settings for an "internet" mp4 in every case.

And here's what Windows says is the resulting file: 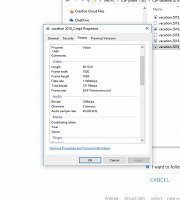 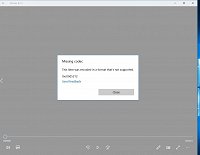 It seems you don't have a Codec to play an MP4, which is odd, but I have seen odder. You might try downloading and installing VLC. It will play anything.

I did. It does. I also downloaded a codec pack and that fixed it. Not sure why there wasn't a codex there, but it is fixed now.

Time to change the title of this thread to "[Resolved]Can't make a working MP4 file".
Isn't it cspvideo?