No problem for me to find that one in FX as it was there in VMS 15 ( only not as only a thumbnail), but to my opinion it should be better if you were right and it was not there, because many users do not know how to use that FX.
Because in Vegas it is only available as a Media FX on a subclip of the event or a part of it.
And than you don't get the warning as I show you here 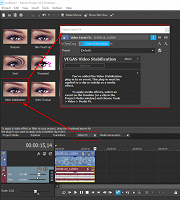 Also you do not have to create a sub-clip to use the VEGAS Video Stabilization FX, it will also work on the original clip in the Project Media bin, however, considering there is often dead lead and trail footage to a clip, it often works best to cut the garbage of the front and tail of a clip, then create a sub-clip, as this may help the stabilization process provide better/faster results.

If you are using Vegas Movie Studio 16, it will not include the Stabilization FX.

First of all, I must say I appreciate very much your replies. I have Movie Studio 16 Platinum and I will study carefully what you said, I am not yet accustomed to MS16P.

I'm finding with very jerky clips the old stabilizer does a much better job.

I'm finding with very jerky clips the old stabilizer does a much better job.

When I reduced the Smoothing to .10 and the Stabilization amount to .10, leaving the rolling shutter unchecked, the cropping was about the same between them, yet the Sony legacy stabilizer (most likely is Mercalli 1.0) was sill better.

The sample footage I used was from a GoPro Hero 3 handheld 1080 59.940p. And like you, the Magix Video Stabilization runs at about half speed with Preview quality set to Best/Full, yet the Sony Legacy stabilizer runs at full 60p speed at Best/Full.

Also, it appears you can not set the smoothing in the Magix Video Stabilizer until after you have clicked on 'Stabilize' and made the first pass.....strange.

@Eagle Six Thanks George. I find the new Vegas Video Stabilization is "weak" compared to the legacy version.

With the new Video Stabilization FX and Smoothing set to the max of 10.00 the stabilisation is far less than the legacy FX. It appears to be roughly equivalent to what the legacy version gives with Pan Smoothing and Stabilization amount both set on 0.50.

@EricLNZ I downloaded and used your settings, then tinkered with it a little, not a lot to tinker with compared to the Magix Video stabilization included with Vegas Pro 16, or Mercalli 4+ plugin. I absolutely agree with you, for that clip I would definately trade the cropping for the stabilization of the Legacy Stabilizer.

@Eagle Six Thanks George. I had problems getting my file to download from both MegaNZ and Wikisend and the forum version wasn't my original, so altered my post and deleted the links!! I'm not having a good day. Yes I'll probably stick with the legacy stabilizer.

I have Mercalli 4+ plugin in Vegas Pro and I think I can get as good or better results with that, although I have not tinkered with it. And, I already have the investment in Vegas Pro and Mercalli. If I was only using Movie Studio I would agree with you and stick with the Sony Legacy Stabilizer. Hopefully Magix will improve it in a future update like they did with Vegas Pro 16.

For anyone else who is interested this is my problem file which Eagle Six played with. It will be on Wikisend for seven days http://wikisend.com/download/772288/

Being somewhat jerky it illustrates the different results between the stabilizers. Using the Legacy Vegas Stabilize with both Pan Smoothing and Stabilization both on 1.00 and RSC unticked it gives a satisfactory result, albeit much cropped. The new Vegas Video Stabilization with post stabilization Smoothing set to 10.0 gives inferior results. Very jerky by comparison. On rendering the resulting file is 20% smaller than the file from the legacy stabilizer.

A stabilizer cannot make a unusable recording usable. I downloaded your Clip, indeed the old legacy stabilizer gives the best result, but that is still worse and unusable to my opinion. I can give you examples where the new stabilizer did a great job and the old made it even worse.

As said, in VMS16, you can use both stabilizers, feel free to use the one who gives you the best result for your situation.

I can give you examples where the new stabilizer did a great job and the old made it even worse.

Thanks 3POINT. An interesting exercise. Your clip is pretty steady and with the viewers attention drawn to watching the cyclists I personally wouldn't consider stabilisation necessary.

@Eagle Six Thanks George. I find the new Vegas Video Stabilization is "weak" compared to the legacy version.

With the new Video Stabilization FX and Smoothing set to the max of 10.00 the stabilisation is far less than the legacy FX. It appears to be roughly equivalent to what the legacy version gives with Pan Smoothing and Stabilization amount both set on 0.50.

Thanks for this comparison and concrete example. If you compare the results between both you can see that the smoothing intervall of 10 is still too small. In your example you would like to have a freeze frame over your whole clip (or a long segment) like Mercalli 2 is doing. We will have some tests and internal discussions about that. Thanks again and have good weekend. Your VEGAS team.

Thanks 3POINT. An interesting exercise. Your clip is pretty steady and with the viewers attention drawn to watching the cyclists I personally wouldn't consider stabilisation necessary.

I use a stabilizer to smooth my handheld camera footage not to correct unusable footage. A stabilizer smoothes shakiness but cannot eliminate camera pans or tilts. When you try to do so, you get those wobbling effects caused by the different camera perspectives and the rolling shutter.

In my example, the old stabilizer tries to stabilize a moving object instead of the camera shakiness.

Fortunately I have kept all the old MSP since MSP 12 and I use MSP 13 for having the NEWBLUE Titler EX and MSP 15 for a true stabilizer. I didn't say I haven't the stabilizer but I have no option on it, only the "by default" and nothing else.

In fact, buying the MSP16 version, we exchanged the true stabilizer for the Bezier Mask, and I hope the Bezier Mask is performing. I have not tried it yet. Otherwise all the NewBlue filters were yet included.

Oups! It wasn't j-v but 3POINT who wrote  "In VMS16 besides the new stabilizer, you also still can use the old stabilizer. You can make it visible in the internal preferences."

Go to Options/Preferences but hold down Shift as you click on preferences. In the Internal tab type in Legacy at the bottom to get the items. There's several. Change FALSE to TRUE for the ones you want. I've activated both Stabilizer and Titler as you can see.

You are fantastic. You made my day !

I have the french version of Movie Studio 16 Platinum and I couldn't find all that.

My Help ? question mark and Help:Contents and index are not working?