Odd AUDIO problem -- looks like some sort of bug..

Everything plays perfectly on my timeline.

I changed the fade-out point by a second earlier on that camera track and the problem is fixed.

So there seems to be a bug that in certain circumstances, kills the audio for the duration of render (maybe if one of the audio sources being mixed suddenly has the media end?).

In this screen-shot I've marked where the "Side" camera (track 15) audio originally ended (and problem occured), as well the point where I moved the endpoint to and the problem goes away. You'll note a spike in the rendered audio file (track 16, which I dropped in to show) where it stops, and the empty waveform to the right of that point.

NOTE: I'd be *happy* to strip down the project to just what's needed to reproduce the problem, if I get word that the Vegas developers want to try to squish this one.

There is probably a bug, but... 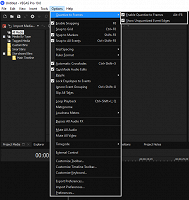 I've seen render issues with frame boundaries in my lifetime.

@RedRob-CandlelightProdctns I like the ragged edge on tis pic, ?

There is probably a bug, but...

I've seen render issues with frame boundaries in my lifetime.

Quantize was checked when things were laid down but i turned it off while editing since it gives me finer control when working with audio.

And yes.. that is how i got the render working with audio... i moved that endpoint back a bit before the media-end notch.

Still.. surely a bug.. there were other tracks all with audio that should have been in the render but the audio render was silent after that point.

How to submit the bug? I asked in another thread and it feels like the bug-submission process is a well-kept secret! Makes it hard to help!

@RedRob-CandlelightProdctns I like the ragged edge on tis pic, ?

Stamps feature on HyperSnap tool.. been my fav for over 15 years!

"Click "SUPPORT New" at the top of this page. Click Ask Support. Choose your issue from "I need help with..."
(Technical problems / Errors: Click the product you are using from the choices provided.)
A list of answers for different issues will appear.
If none of those address the issue click SEARCH FOR OTHER SOLUTIONS.
Type the issue you are experiencing into the search bar provided.
Click FIND A SOLUTION.
Click SEND A SUPPORT REQUEST.
Log into your support account.
Type the description of the issue.
Click CONTINUE.
Fill in the information requested on the next page and click SUBMIT SUPPORT REQUEST."

Assuming requesting a Vegas support ticket is basically the same as Sound Forge and other Magix products, here is a link to a comment with my 12-step 'request Magix tech support' cheat sheet.
https://www.magix.info/us/forum/unable-to-record--1272206/#ca1661047

Another one of the procedures linked in this sticky on how to request a VEGAS support ticket is in this comment.