We have just released VEGAS Pro 17 Update 1 (build 321). Please give us your feedback in this thread.

The build 321 will overwrite your installation and retain your settings. Your computer will need to be online for activation after the update. Have a great day, everyone!

I did contact FXhome about this issue at the beginning of Sep (before the VP update) and received the following response. Where is the fix is this update????

A new response has been posted to your ticket:


Thank you for contacting FXhome. That compatibility requires an update to VEGAS Pro 17, and I believe Magix plans to include it in the next update to that software.

How do I go back to the Vegas Pro version 17.0 Build 284? The new version is not functioning properly.

Seems Stabler.. but still had a crash when editing (feels thumbnail related) waiting on update. No issues on V16 for me.

If you need to go back to previous build, look at no 5

Can someone explain this experimental feature for me? I have experimented with the DPI selection turned off and on and it appears to give me better graphics definition when turned on. For instance when I have a built in pan across a lengthy background which I animated in 12fps within my animation software TVP and then export to Vegas as 24fps I see less stuttering (or actually NO stuttering!). The differences are subtle because I know when I can get away with this and when not.

For instance, If the drawing of a street depicts a downhill slant I can get away with this 12 versus 24 fps discrepancy because the human eye can be better fooled when vertical lines repeat themselves twice but each second instance is a fraction of a milometer lower lower lower than the first.

But when I have the Vegas DPI scaling turned on it seems to me that the stuttering completely disappears making for a wonderful hidden cheat. Can I be right or is this just wishful thinking on my part which fools itself into believing there is indeed "improvement" when the feature has nothing to do with what I am expecting of it.

I received this message from Magix today and something different from NewBlue, blaming Magix:

Thank you for your message.

VEGAS Pro 17 had a change to its video plugin host id. The third party plugins which are missing will require an update since they are host locked with the old VEGAS id. You will need to get the update from the third party plug in provider.
--
Thank you for contacting Magix Support.

MagixD....(can I use your ID?). Thank you for removing the name of the person who sent the above. Sorry. My bad!

No AMD decode, thought that was the priority?

I'm glad I took my AMD card back after all

I'm using Vegas Post and although I was having a few issue learning how to use the new features and separate programs in Post, I could still access them to learn, BUT, after the 321 build update, the rendering slowed extremely 28 hours to render 1 hour and 40 minutes, and the new features and programs will still open, but nothing works when I try to use them. The buttons/sliders in color grading are now greyed out and can't be used, Vegas Effects, none of the effects work when added. All drivers are up to date. Is there a way to go back to the previous build?

I think V17 will end up being one of the most historic versions of Vegas. Nice to see the kinks getting worked out. I was looking through an old box of stuff the other day and the installation disc for V11 fell out. It is amazing to see how far Vegas has come since then, and yet, someone using V11 wouldn't have a hard time transitioning to V17. 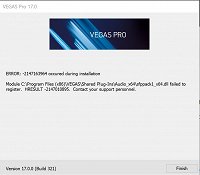 Um, did you try installing as administrator?

@Christopher-Frank Please install https://www.microsoft.com/en-US/download/details.aspx?id=15336 ("Microsoft Visual C ++ 2008 (x64)") and https://www.microsoft.com/en-US/download/details.aspx?id=29 ("Microsoft Visual C ++ 2008 (x86)") before you install. It comes with an Windows update or some installer. Next time before flaming something try to search for a solution in this forum, ask the community or use the live chat with support.

Hooray! I fixed the problem of many of my NewBlue Plugins not working after I updated VP17. The solution was originally suggested by Seth at NewBlue: "clear the cache of the plugins in Vegas." I didn't even know there was a separate cache for the plugins. The path to finding the cache files that Seth suggested didn't work for me, and I was reluctant to restore VP17 to its original install, as I would have lost all the settings, etc. But I found this on a Sony Vegas UK site, and life is good again. The path shown in the second option (in bold) is what worked, but substituting 17 for 14. I'm even sufficiently optimistic to try upgrading my VP17 again! Here's what I found that worked! Addendum: I even did the update to version 321 and everything still seems to be working!

Clear Plug-in Cache
Vegas is notorious for getting its plug-in cache database screwed up. Not updated properly on effects install or uninstall. This affects items showing up in the various effects lists dialogs/panels.
In Vegas 12, 13, 14 this is easily cleaned up by deleting the cache files and Vegas will re-create them the next time it starts up. In the folder
C:\Users\<your user name>\AppData\Local\Sony\Vegas Pro\13.0   (if SV12 then > 12.0)
delete the files “plugin_manager_cache.bin” and “svfx_plugin_cache.bin” and then restart Vegas. Your effects list should be complete.
In 17 the folder is
C:\Users\<your user name>\AppData\Local\VEGAS Pro\17.0 (Substitute 17.0 here.)

ADDENDUM: After doing the above, everything worked fine, for awhile. Then the problem reared its ugly head again. This time, I replicated the steps listed above, but I took an additional step. As I had a previous version of Vegas Pro installed on my computer, I went back into those files and checked the 2 files that we were instructed to remove. Sure enough, even though I hadn't used the previous versions of Vegas lately, the plugin_manager_cache.bin file now had a current date! Somehow, it was connected to V17. I deleted that file, and everything is working again. Let's see how long that lasts!

After reinstalling W10 allow a couple of days for Windows to update. Once you have good clean install complete with graphics drivers etc make a system image. A clean W10 install will the only take about 15 minutes. We'll worth the effort. Had problems after latest VP17 update so was glad I had a fallback image.

The problem you are having is caused by the windows update, not by Vegas. I had that same thing happen to me after windows updated. It also broke all my previous installations. 2 things fixed it:

1. Microsoft makes an uninstall utility that uninstalls software that is being difficult. I had to use it to uninstall the 2015-2019 c++ redistributable package in windows, using the programs and features dialogue box. Then I re-installed it.

2. I had Vegas 17's launch version installed when the windows update ruined it. I had to install the latest version of Vegas 17 to get it working. After this, all my previous versions of Vegas started working again as well.

Edit: I see Pascal got to it first... however, FWIW, it wasn't the 2008 redist that I re-installed to fix it, it was the 2015-2019 redistributeable... though I also updated Vegas, which could have in turn installed the 2008 update and I didn't realize that fixed it, I'm not sure... just listing what I did to fix it.

I have Vegas Pro 17 Update 1 applied yet the rendering part hangs before completion. I've sent a report to tech team - no word. My laptop runs fine so it may be an isolated issue from my Dell Desktop.

Hey guys, I had this issue with color grading panel, but was waiting for the update to fix it but its still there. Basically the whole interface is messed up, buttons disappearing, sliders go wrong etc.I never seen anything like this in vegas or any of my program. Does anybody know of some fix?

Can't say I've experienced anything like that. Make a thread for it so we can troubleshoot it and it not get buried under a bunch of unrelated posts.

The bug in rendering where the "render options" button is grayed out for AC-3 Studio is still there. 😠

The bug in rendering where the "render options" button is grayed out for AC-3 Studio is still there.

Where? What encoder? What template?

I think AC-3 Studio encoder cannot be modified... that's why 'Render Options' is grayed out.

@set some of the Render Options were still available in VPro 15.