I have used this for a long time with no problems. I went to insert media and it is not recognizing the audio part of some of my MP4's. I have never had this problem in the past. They are all AAC 48khz, stereo. I always have output the same audio settings and have never had an issue before. I have already used the same file with a freebie DVD authoring software with no problem but I like this on much better. Any ideas?

It could be the wrong kind or wrong resolution of MP4. In fact, MP4s are not the best format to use in a DVD Architect project. You're best using a file format that's as close to the final DVD or BluRay output as possible.

Are you creating a DVD or a BluRay? If you are using Vegas or Movie Studio to create your final video, there is certainly an option better than an MP4 -- depending on what your final output will be.

I am using Premier Pro. The video portion comes through just fine but no audio. Files untouched from my video camera work just fine and they are MP4 also. I even match the audio specs when I output my video in Premier Pro. I have done this many times before in the past with no problems. Feel free to suggest another format and I will try it.

If you are creating standard definition DVDs, you should be rendering a DVD compatible MPEG2 and either a WAV or AC3 audio. Otherwise, DVDA has to re-render your video and audio, possibly creating less quality, and as maybe in your case, not being able to use the audio.

These are the types of files you should provide for DVDA

What video codecs will Blu-ray support?

Please note that this simply means that all Blu-ray players and recorders will have to support playback of these video codecs, it will still be up to the movie studios to decide which video codec(s) they use for their releases.

What audio codecs will Blu-ray support? 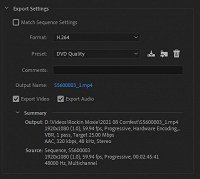 here are my output settings, see anything I need to change?

Yeah, don't export that audio. Create a separate audio file using one of the formats above.

here are my output settings, see anything I need to change?

Preset - DVD Quality?? You are making a Blu-ray, not DVD? I query because you said you are making a "Blu-ray DVD". Which is it. Is there not an option in your Premiere for Blu-ray? Also mp4 file type is not part of the Blu-ray specs (unless it's recently changed). Your video will be recompressed as will your AAC audio.

this first brings in audio, the second as you can see does not and I have no idea why. I have used the file that does not in 2 other DVD authoring software with no problems,

@Darren-Schultz Post MediaInfo on one of your problem files. Instructions here https://www.vegascreativesoftware.info/us/forum/faq-how-to-post-mediainfo-and-vegas-pro-file-properties--104561/

Do the same for one of your good files so we can compare the difference.

@Darren-Schultz I'm no expert on audio but one thing stands out. The good file has constant 256 kb/s bitrate and the bad file has variable 317/377 kb/s bitrate which to me looks strange. 256 Constant is I believe the norm? @Musicvid

Here is another one that imports just fine and is variable

I am at a total loss as to why this is happening. Also I do not control control the audio variable vs. constant bit rate. I did just try to re-render with video being set to constant bitrate and the audio still showed variable and did not import. Also keep in mind that I have 2 other DVD authoring software programs that have no problems importing these same files. Unfortunately DVD Architect is the best hands down and I want to continue using it so this situation disappoints me to no end and has already cost me over $100 to get the other software which is so so at best.

There's an easy work around to your problem but firstly we need to sort out what you are doing.

The workaround is to drag your problem files into Premiere and export just the audio as a wav or AC-3 audio file. You can then use this in DVDA. Drag the video file into your DVDA project and in its Media Properties go to Track Media. Select Audio and in the Drop down list select Replace and browse to your audio file. It's as simple as that.

Thank you, Eric. These are the questions I asked in my very first response. It would sure be easier to help if the poster would respond to them.

I agree, Premiere is capable of exporting the required formats for DVDA, why fight it.

I am trying to make a Blu-ray disc composed of 14 different video files. Want to be able to play all and any one individually. That is why I am using DVD Architect for this.

I am trying to make a Blu-ray disc composed of 14 different video files. Want to be able to play all and any one individually. That is why I am using DVD Architect for this.

Are you rendering all those 14 different videos as one project in Vegas Pro and then importing the render (e.g. .avc) into DVDA and then creating chapter points on DVDA's timeline for the entry point for each segment? At least, that's the way I've successfully done it for the last 10 years or so.

I just get the impression that you are creating your Blu-rays by some other method. If you are, could you please detail your method.

I am using DVD Architect software. I just import each individual MP4 file and adjust the menu to my liking, then render and burn the disc. I have done it many times before. However this time I get no audio and I can see at import time that no audio is detected.