".mov" or ".MOV" is the file extension used for Apple Quicktime video files. While VEGAS Pro will play some .mov files using its native decoders, others still require Quicktime for Windows for playback. This often causes problems such as stuttering playback, unwanted artifacts, audio distortion, a luminance shift, or a simple refusal to open the video and/or audio correctly. Quicktime for Windows is 32-bit only and is now no longer supported by Apple.

In particular, files from Apple iPhones and iPads, as well as .mov footage from many cameras, devices and recording apps, would not open correctly in VEGAS Pro 14 and earlier. In VEGAS Pro 15 and later, more of these files are supported and will open correctly with the native codecs.

Quicktime is a format "container" or "wrapper" that can contain video and/or audio streams in various formats. In many cases the playback problems can be solved by losslessly "re-wrapping" the same video/audio streams into an .mp4 container that VEGAS Pro can decode using its native codecs.

1. VERIFY WHICH CODEC IS BEING USED

Right click on a .mov video file in the VEGAS Pro Explorer window, choose Properties, then scroll to the bottom of the window. The Plug-In Name identifies which codec Vegas will use to decode the file. 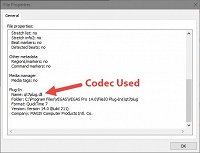 Properties are also available by right clicking on a file in the Project Media window, or a video event on the timeline, then choosing the General tab.

If the plug-in name is mxhevcplug.dll then the file is HEVC (H.265) or ProRes format and the conversion procedure below will fail (it will create an empty file).

If the plug-in name is compoundplug.dll or so4compoundplug.dll then VEGAS Pro is already using it's own native codec to decode the file and and the conversion procedure below is unlikely to help. It will fail if the audio stream is PCM.

If the plug-in name is qt7plug.dll then Quicktime for Windows is being used to decode the file. If you don't have Quicktime for Windows installed then there may be no Plugin section at all. In both these cases, look at the Streams section of the Properties. If the video stream is AVC or H.264 and the audio stream is AAC or missing, then the following conversion procedure is likely to help.

If the stream format is something else, such as PNG, Motion JPEG etc. then the conversion is less likely to help and may fail completely.

FFmpeg is a powerful, free command-line utility that can convert video and audio between a huge range of formats. While there may be other converters that can do this, FFmpeg does a very good job of it.

Visit http://adaptivesamples.com/how-to-install-ffmpeg-on-windows/ and follow the instructions on how to install FFmpeg. https://ffmpeg.zeranoe.com/builds/ defaults to the latest 64-bit nightly build, but it is safer to use the latest release build (which was 3.2.4 when I wrote this):

How-To Geek has more help on how to add the bin folder to your path in various versions of Windows.

If the command prompt is not showing the location where your .mov files are then change to it by typing cd followed by a space then the correct location, for example:

To convert a single file, type the following line, replacing "filename" with the actual filename, then press ENTER.

If you have spaces in your filenames than you need to surround them in quotes:

FFmpeg should then convert the file to a .mp4 version and leave the existing .mov file. The conversion should be extremely fast, as it is just rewriting the file header and not re-encoding the streams themselves. Test the new .mp4 file in VEGAS Pro to see if there is an improvement.

If you have a few files to convert, you could copy and paste that line into a text editor such as Notepad, change the filenames after each conversion, and copy and paste it into the command prompt.

If you have many files to convert, or a regular need to convert, then you can create a Windows batch file to automate the process.

Download here, or open a text editor such as Notepad, then copy and paste the following text into it:

Save it as mov-to-mp4.bat or similar in the same folder that contains your .mov files. Then simply double-click this .bat file. FFmpeg should convert all the .mov files to .mp4 files, leaving the .mov files as they are.

5. USE AN FFMPEG GUI

If the above steps are problematic or daunting for you, you can use an FFmpeg GUI (graphical user interface) program instead of the command prompt. Very many FFmpeg GUIs have been written; Some are better than others, and some are no longer in development, so use outdated versions of FFmpeg. XMedia Recode works. On the Format tab choose MP4, and on the Video and Audio tabs choose Mode > Copy, like this: 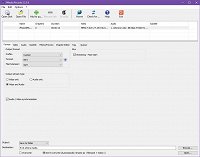 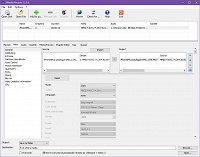 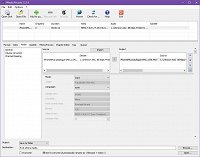 However for converting many .mov files on a regular basis, nothing is as fast and straightforward as using a batch file as described in section 4.

The ImportAssist script within Happy Otter Scripts can prepare various troublesome formats for successful import to VEGAS Pro. It provides a GUI for rewrapping or transcoding media including iPhone files, and its installer handles installation of FFMPEG.

Quicktime for Windows (via qt7plug.dll) decodes files in VEGAS Pro with higher contrast than VEGAS Pro's own compoundplug.dll. For example an iPhone 6 .mov clip decodes with black at RGB 0 and white at RGB 255. If left uncorrected before re-rendering, this results in excessive contrast and lost (clipped) highlights and shadows in most final playback scenarios. However after re-wrapping to .mp4 with FFmpeg as described above, the black level is 16 and the white level is 235. Effectively the conversion automatically corrects the levels for editing in VEGAS Pro, and is a welcome benefit. Further explanation here.

If your camera or software allows you a choice of formats, then MP4 is generally a better choice for editing in VEGAS Pro than MOV. However if you want to record PCM (uncompressed) audio then you may have to choose MOV. But such files are generally decoded by native VEGAS codecs and not by Quicktime, so this may not be a problem. Test the choices and try to use one that does not use qt7plug.dll as the plug-in.

HEVC footage shot by the Apple iPhone 7 or later needs to have its video stream re-encoded or transcoded, not just rewrapped to MP4. See this comment for details.

10. IF YOU NEED FURTHER HELP

Those who have trouble using ffmpeg may alternatively download GoPro Studio and convert to Cineform AVI. The software is officially free.

Note, the 'Studio' may have some limitations on the sources it can open due to its "proprietariness".

Those who have trouble using ffmpeg may alternatively download GoPro Studio and convert to Cineform AVI...

Cineform is a good choice as an intermediate file, and worth trying if you can't get FFmpeg to work or if the file still does not play smoothly after conversion. However the FFmpeg conversion to .mp4 from a .mov file that contains AVC/H.264 has the benefits that it is much faster, much smaller file size, and truly lossless.

Nick I hope you stick this faq so it doesn't get buried.

Nick I hope you stick this faq so it doesn't get buried.

What is there's no video stream?

What is there's no video stream?

Should there be a video stream? Is it a .mov file, or a .m4a file, or something else?

What about MKV files?

MKV is another, unrelated wrapper.

You should be able to convert to or from mkv with ffmpeg just by changing the file extension from mov or mp4 to mkv in the examples in the first post.

Has someone tried this? I'm not sure it would preserve chapters, multiple titles, multiple audio, and language subtitles from MKV.

It probably wouldn't. I was just thinking of straightforward video and audio streams.

Has someone tried this? I'm not sure it would preserve chapters, multiple titles, multiple audio, and language subtitles from MKV.

MakeMKV, MKVExtract, MKVToolnix, MKVMerge have been pretty much stock and trade for leveraging this particular wrapper.

It probably wouldn't. I was just thinking of straightforward video and audio streams.

Probably the majority of MKV encodes are DVD and BluRay rips, because it can store all the extra tracks and metadata in a single file. Beyond that, MKV is just another compression-agnostic wrapper like mp4.

MKV is another, unrelated wrapper.

I searched for MKVExtract, found this. How do I use it to convert to MP4?

You don't, unless it's an mp4 wrapped as MKV.

Use mkvextract with mkvtoolnix to extract your movie in its native format, whatever that may be.

Then, if you choose to convert that as-yet unidentified format to mp4, you would do that with an encoder or converter program.

Precise instructions are to be found all over the internet. Please understand that the forum guidelines discourage discussions of any form of copyright circumvention.

Hint: Your MKV "may" open in Handbrake.

Tom, REMUXING in ffmpeg is vastly preferred to using the converters you mentioned because converters must ENCODE a new stream, making them more of a last resort from a quality standpoint. It also takes many times longer for them to re-encode when it isn't necessary.

The term MUX refers to an exact bit-fof-bit copy of the original under a new umbrella, which can happen in a matter of minutes instead of hours. Sometimes it's just easier (lazier) to use a converter, but for extracting native MP4 from MKV and MOV, it's also the worst route.

Hi! I have been using this FFmpeg technique for the past year to convert .mov to .mp4 without any problems (thanks so much). But recently, I have encountered issues with the output .mp4 files. When I try to import them into VEGAS Pro 14 (build 161), an error message appears, reading, "None of the files dropped on VEGAS Pro could be opened." Playback of the output .mp4 files via Windows Media Player still works fine.

I tried changing the .bat code to the following:

And it worked! VEGAS could open the file. But the conversion was much slower, and the preview screen was extremely laggy. When I checked the media properties of the output .mp4, it still said the plug-in being used was "qt7plug.dll."

Is there any way to fix the preview lag? I don't necessarily need it to be an .mp4 file.

In the context of making MOV (iPhone, iPad) video more editable, should some intermediate level FFMPEG script writer discus the -r option to set the frame rate to a constant?

The following code can be used to process list of files passed in params:

Save the code as rewrap2mp4.bat and then use like this:

I've created a button in Total Commander that is calling the bat file. So I'm selecting a number of files and clicking the button.

@john_dennis Not even beginner ffmpeg user. Anyway I will have to look around for a vfr file to test.

I used this to convert a 25fps CFR file to 60fps, using HW acceleration, time is benchmarked also.

I later located an iPhone 5 FHD clip and converted it from VFR to CFR, 29.97 fps.

A QP value of 30 produces just under, closest data rate to the original. Ideally for using in place of the original VFR file a higher data rate, lower QP value is advised.

See this ffmpeg documentation link where the fps filter is also discussed ...