I want to do a test on my existing Box and then when the new MONSTA!

Why do you need it? You was asked to share your new experience without these numbers that can force others to spend their savings! :)

@fifonik - What are you implying?

That your new PC will render it in less then 8 seconds and someone also decide to buy one!

@fifonik - Ah, righto. Thanks for the explanation. Just to add some flesh onto my motivation to UG. My output has started to rely heavily on S/w plugs that “seize-up” and fall over on their latest incarnations with my arthritic kit. I do plenty of BETA testing and I can’t any longer rely on my rig NOT being the issue. So, for me it’s been a business and development decision funded from my lean and mean capital budget. It’s been a long time coming, but with the drop in kit prices and the demand-curve for more s/w plugs requiring more muscular processing, the Planets aligned. Again, this industry excites me and daily gets me going.

As to waiting and waiting, I was the geyser who held out for full HD and totally passed the HDV temptations and at that time with much envy.

What is in Region 5?

Render: I can't get/render through Region 5. What gives? 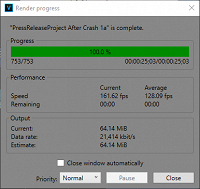 So, these Regions Render at 98fps and 128fps. Happy with that, but why is VP16 chokiing on Region 5? What am I doing wrong?

Well, Deleting Region 5, yeah I know, cheating, I do get 16 seconds for the approx 50 seconds of Media. I'm happy with that, but this mix with Region 5, the AVCHD media makes my Rig choke. I'm now reviewing this AVCHD Media in a separate VEG, and I still can't make it play ball. Any suggestions?

Have you tried with GPU preview on/off? You may also try different gpu driver.

@GJeffrey - Nothing, printable, to say about that!

Have you tried with GPU preview on/off?

@GJeffrey - Really? Is that it?

@GJeffrey - Why, because of that Media? Nothing else, dear heart?

@Grazie that project plays smoothly on my 8 years old rig. Does it play well on your old PC?

It might be gpu related only. Vegas 16 not being optimized with 20 series Nvidia?

It’s only that Region 5. What’s in that Region 5 that’d make it choke? Otherwise VP16 runs as smooth as my ... bald head. Yes I’ll try my old rig, but that’s gotta an ancient nVidious Card.

“This happens with VP 16 and 15, latest updates, tested on different PC's and laptops. It doesn’t happen with VP 13,”

There isn’t an issue rendering using the other non XDCAM template.

@Former user - How about Preview? My sticks just on Preview on that Region 5.

I just tested preview at best full on my laptop, see specs. It plays at 29.97 from start to finish, all regions.

@Former user - Thank you. I've been onto my Builders Support Team, where he did a Remote operation of my GPU and driver set, and he recognised I needed an a more Media Creation Driver for content creation driver and not a Gamer DRIVER. He also gave more Power to the nVidia. The Red Car Previewed five times without a hitch but the sixth time VP16 locked at Region 5 again.

There's nothing special in Region # 5. Chromakeyed PNG, slomo-ed and bump mapped AVCHD and a Generated Media color gradient, all with some dissolves.

If I set my preview quality to "Preview/Half" even my small 2,6 GHz notebook plays Region # 5 with full 29,97 fps. I also think there may be a graphic driver problem on your system.

There's nothing special in Region # 5. Chromakeyed PNG, slomo-ed and bump mapped AVCHD and a Generated Media color gradient, all with some dissolves.

@Marco. - Yes, I went through this myself too. It's only when reaching the combination of that AVCHD and the the others do I get grief. If I cut that chunk out, then no problem.

If I set my preview quality to "Preview/Half" even my small 2,6 GHz notebook plays Region # 5 with full 29,97 fps. I also think there may be a graphic driver problem on your system.

@Marco. - And you have GPU ON? Like you I can play all without a hitch on Preview Half and Preview Full. The next step-up was Preview > Good > FULL and that choked VP. Presently I can't do BEST > FULL.

The Engineer/Support saw that the CPU nor the GPU was getting above 6%.

Yes, GPU acceleration is on here.

But my system is lightyears away from your rocket machine. With the Intel HD Graphics 520 my system is even below the recommended minimum specs for VP16.

I meant to bring this up earlier re: your new PC and graphics drivers, you probably know all of this anyway.

There are new “Creator” drivers for Nvidia, slower update cycle, purportedly more stable, although not sure if they are even tested on Vegas before release, some other NLE'S definitely are tested on.

Your builders support team have just seen to that.

There is also a newer type of Intel graphics driver, relevant to your Intel on chip integrated gpu. This driver supersedes the older type. Its a little tricky, not really recommended to go back to the older one if you do upgrade to the newer one. Perhaps your system builders have done this already?

When I tested last year with my new build I was using the older type intel driver. My Qsv render times then were 15s with a very small OC. With the newer Intel drivers this changes to about 48s, no overclock.

So the new Intel driver type has a big hit on QSV render times. This doesn’t really bother me too much because, its probably more stable? and I use Nvenc for HW rendering because its better quality, as tested on my PC.

Just while on the subject of render times, all of mine were done using the Magix mainconcept, (matched to origional MC) not the XDCAM template. That club of 14s is a club of only one, @Bruceusa's as he previously mentioned it was done using XDCAM, not Mainconcept. The Rhino may have achieved similar but overclocked to 5/5.1?

My Nvidia nvenc render time with the newer Nvidia “Creator” driver is unchanged, 18s. Just check with your builders support if you have the newer type Intel drivers.

... and he recognised I needed an a more Media Creation Driver for content creation driver and not a Gamer DRIVER.

Which driver do you use.?

My findings after long having trouble is that I needed this one, very good, stable and fast.

Region 5 played up on my machine. Rendering stopped around 40%.  Other render formats OK. Went back to an earlier nvidia driver in order to use XDCam.    Saw no difference in other render formats so no apparent advantage in later drivers.

My older machine was 2660K based and almost identical to yours and very reliable.  You will soon get used to the increased speed.

Which driver do you use.?

My findings after long having trouble is that I needed this one, very good, stable and fast.

@j-v - Yeah, looks the same. I just got this from interrogating the nVidia System info:

It is the new Studio driver.
And so it played the red car test with Nvidia choosen for the accelerated video in Options/Preferences/Video on laptop from signature